Ouch …truly the most poetic quote of the weekend. Not in the sense that suspension was the topic being discussed. It was the fact that it was only in the description of a certain suspension, and heres why.

Most people only know two sides of suspension, televisions shock fest and primitive cultures ritualism. So where do suspension conventions fall into these categories? The truth is they dont. Suspension has come a long way. Groups of people are now coming together to teach to learn to give and to share. Communities have sprung up; friendships established and families have been formed. We all have vastly different worldviews and personal beliefs, but the love of suspension is our common bond.

So, it was midway through the second day of the Oslo suspension convention. The crew and participants had already viewed several suspensions and many photographs. However, not one word of pain, shock or horror had been uttered until we came to a four-point ass suspension. Helene Fjell, an incredible photographer and sister to Havve the main event organizer, looked on and said the immortal word ouch. To those who have never seen an event such as suscon, the word ouch would naturally come to mind. People are hanging from hooks you know. So why would this be a strange occurrence? 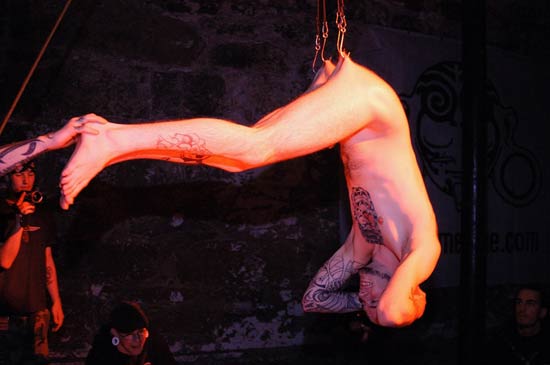 This weekend marks the fourth Wings of Desire suspension convention. Of which, Helene has documented Havve and the rest of crew every step of the way. She was with camera in hand back in 1993 when Havve first established Pain Solution. She has, in a sense, seen it all. So, when that immortal word was spoken, it caught my attention. Yes, he has four hooks in his ass. No it doesnt look terribly comfortable, but its still metal objects, put through fresh piercings, holding up a full-grown man. Painful? To those who have never attempted a suspension, it might appear as such. However, to those involved, the experience has been described to be anything fromspiritual to euphoric to just plain ouch.