You’re Scott Spiezio. You’re divorced, you’re injured, and your .064 batting average is so pathetic that even the last-place Seattle Mariners have no spot for you on their roster anymore. Ostensibly, things are in the crapper. What do you do?

Apparently, you get a tattoo.

“It’s been a bad year,” Spiezio said in an interview with the Seattle Post-Intelligencer’s Jim Moore. “I said, ‘Hey, let’s have a little fun’ instead of being uptight. I guess I went a little bit crazy.”

Forgoing the traditional “crazy athlete” route — such as developing a crippling drug addiction or failing to appear for a probation hearing — Spiezio instead celebrated his relationship with his new model-girlfriend by getting a large, seductive portrait of her tattooed on his upper arm.

Wanting “the tattoo to look like a pin-up found on barracks walls from wars in the past,” he sought out the services of talented portrait artist Rich White [PORTFOLIO LINK] of Action Tattoo & Body Piercing in Auburn, Washington.

You’re Scott Spiezio. You just got your first tattoo, you’ve got a beautiful girlfriend, you’ve got an indefinite amount of vacation-time, and you’re still getting paid over $3 million next year.

I’d be smiling too. 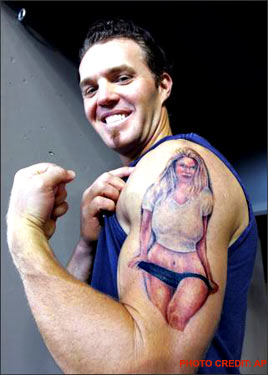 Spiezio with his new tattoo.

Spiezio claims that he is saving his other bicep for a tattoo dedicated to his three children, and sources close to the athlete confirm that he is also currently consulting with friends to concoct a believable cover-story to tell future girlfriends about the pin-up on his arm once this relationship crashes and burns.

One thought on “Play ballsy.”