Right now a customer of Cheyenne at Oddball Studios in Portland, OR, is flipping out about the nautilus tattoo they got on their nape. Apparently their friends ribbed them about the end of it looking like a penis, and now they’ve convinced themselves that the cock was actually added to the drawing as a cruel and twisted joke by the tattoo artist. They’ve been slagging the studio to BME members, on LiveJournal, and it’s even become a Fark photoshop contest.

Here’s the tattoo in question: 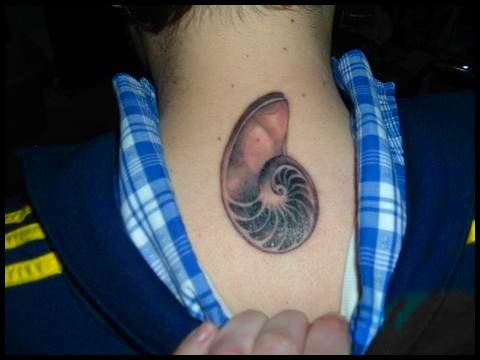 I mean, I guess I can convince myself there’s a cock in there if I really want to believe it, but if I’m stretching my “must see tubesteak now” muscle that far, I’m in a world of dick, and seeing forests of wang all around me (the supermarket’s cucumber and zucchini section is my pornography). Here’s a few pictures of a real nautilus shell. The left most one is one of the pictures that the client showed Cheyenne, and the others I grabbed from Google as examples: 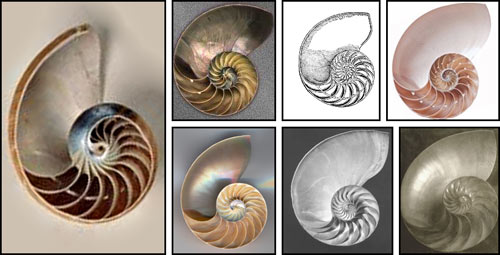 They all kind of look like cock if that’s really what you’re desperate to see — and if you’re not a confident person, I suppose you could come to truly believe it if you’re friends teased you about it… But I think when you transfer the blame to the tattoo artist and actually start campaigning against what to the best of my knowledge is a top quality shop, you’ve crossed a karmic line that reflects very poorly on you.

To the wearer of the tattoo, I have but one piece of advice for you: If you ever go to the zoo, avoid the elephant enclosure.