This story about a visit with traditional tattoo artist Wilson Fitigo in American Samoa in 2002 was just so funny that I had to share it with you. The full size photos will be in the hand poked tattoo gallery in the update that I’ll have posted late tonight (argh, another late night).


“This wan’t the regular studio we’re used to in the Western World — this was the real thing. I don’t think a normal person would have accepted the conditions. There was a kid running around, the tools where whashed with an old toothbrush and soap, the ink was in an old clamshell, some puppies where sick, and there I was lying outside on the ground. Wilson Fitigo, the tattoo artist, had just cut himself with a bushknife and had a homemade bandage on…

I was shaking with fear… and had three nice boys around me holding me down. There was no pain as this pain… Nothing will hurt again… I spent six and a half hours on my back, triyng hard not to scream like a pig, but sometimes I almost fell asleep. Halfway through I threw up my lunch, and had never been so happy in my whole life.

And for the last hour, my mother had to hold me down, translating my Swedish cursing the whole time to Wilson! The tattooing was like someone punching you over and over again with a hammer, and I think the sound was the worst part.

Oh, and like any other tattoo, this one had to be washed in rainwater from the roof — but the massage was out of this world! But now… my precious!!! Six and a half hours later, and of course I’ll do it again!“ 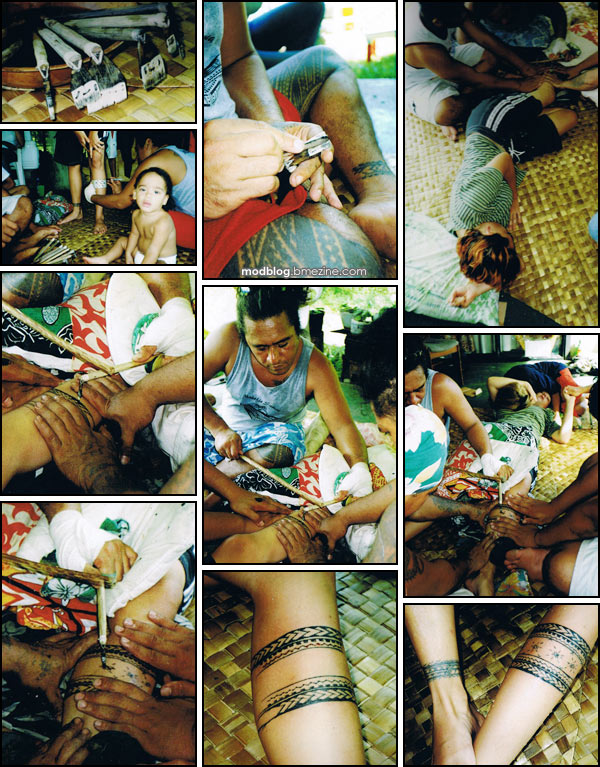