Thanks to Matte for sending in this textbook photo (I think via the APP convnetion). Let me quickly quote the text: “Is This Man Abnormal? Whether unusual individuals are labeled “abnormal” and perhaps given treatment for psychological disorder depends on a number of factors, including how abnormality is defined by the culture in which they live, who is most directly affected by their behavior, and how much distress they suffer or cause” 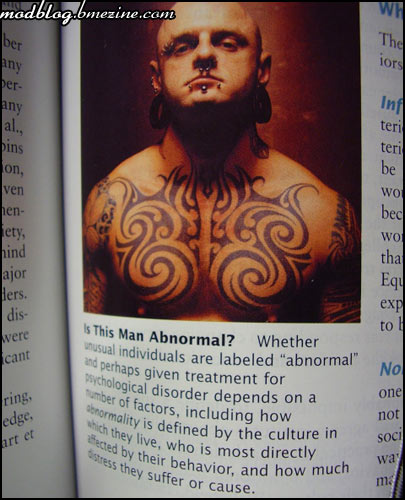 The statement above might have some validity on a small scale, like if the question is whether a person is mundane or average in relation to their peers and community. But to actually call someone “abnormal” and suggest they may need psychiatric treatment for being tattooed is ludicrous.

FACT: Almost every society in human history has used body modification as a significant part of the way they expressed themselves. It’s the core of our oldest forms of religion, art, and societal definition. Along with communication (which body modification is a form of), it made us “special” among all animals. I believe that the fact that modern Western society has largely lost this form of expression — and is pressuring the rest of the world to cut it out as well — suggests that our culture as a whole is sick, abnormal, and in need of a psyche assessment… and a whole lot more tattoos.

That said, I suppose you could use my basic logic here to support rape and cannibalism too. But hey, my great grandfather was a famous German cannibal, so maybe I ought to stop this line of thinking before genetics start kicking in.