So the Church of Body Modification has yet another member claiming that their facial piercing is protected by divine right and thus they should not be affected by dress code policies that ban piercings. Sara Yule got a job at a Catholic hospital and decided to her lip pierced. When told she would have to wear a retainer, she insisted that her religion did not permit the wearing of such retainers, and on religious grounds demanded that she be allowed to keep the ring. 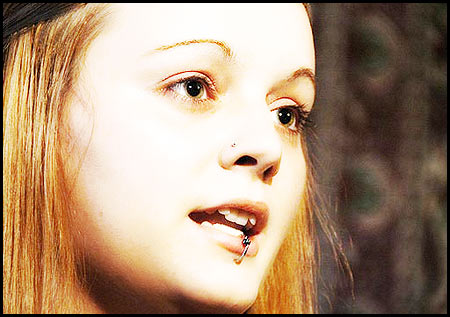 Sara says that she is “looking to make history” (religions always like ambitious and idealistic young heroines). The CoBM — big surprise here — hasn’t bothered replying to email on the subject so far. What I’d love to see is an explanation from anyone on how body modification in this context (a lip ring) is an overtly religious act, versus, say, simply an act of free expression (and the underlying spiritual freedom that all acts of free expression contain). As one of it’s founding members, I strongly feel that the actions CoBM members are not, by and large, “religious” in nature.

Now, don’t get me wrong. I agree with Sara that taking control of your body is an essential part of becoming an individual, and I think it’s terrible that there is a system in place that works to stop people from being individuals. However, part of being an individual is also accepting that sometimes doing the right thing isn’t easy, and that the more free you want to be, the more you have to rely on yourself, rather than expecting others to help you.

I think firing someone over body modification is bullshit. Worse than that though, I think that the fact that “freedom of expression” is not a fundamental and protected right in the United States (it is a right in many other nations), is also bullshit. Sadly though, you can’t use a bullshit religion to fight bullshit laws.

35 thoughts on “The latest CoBM news”