Last night, I was looking around on the internet while thinking about a Hebrew tattoo I have wanted for a few years now. I happened upon a forum on a certain site where some poor soul had asked for the correct Hebrew spelling of a saying. He was then thoroughly raked over the coals by a few members who felt he had no business getting a tattoo in a language he could not speak and had no ties to.

It seems that this is forever a hot topic, particularly when you see so many celebrities getting misspelled tattoos (I’m looking at you David Beckham) because they really don’t understand the language. Our friend Tian over at Hanzi Smatter has a blog devoted to those hapless individuals who have attempted to get Kanji tattoos to represent certain ideas and wound up with a whole other meaning altogether.

While I feel my connections to both Hebrew and my Latin tattoo (“carpe diem” – I’m an English major, shush) are fairly solid, I’m also not sure where I stand on the argument that a person should have actual ties to the language if they’re going to permanently ink it into their flesh.

So, I turn to you dear reader and ask the following, should people only get tattoos in a language that they have a personal connection with and understanding of, or is it simply enough to enjoy the way it looks or what it represents (particularly in the case of Kanji)? Remember, there are no right or wrong answers so let’s play nice while we debate this!

This “memento mori” piece was sent to us by Chad who was inked by Timpac over at Forever Tattoo in Sacramento. 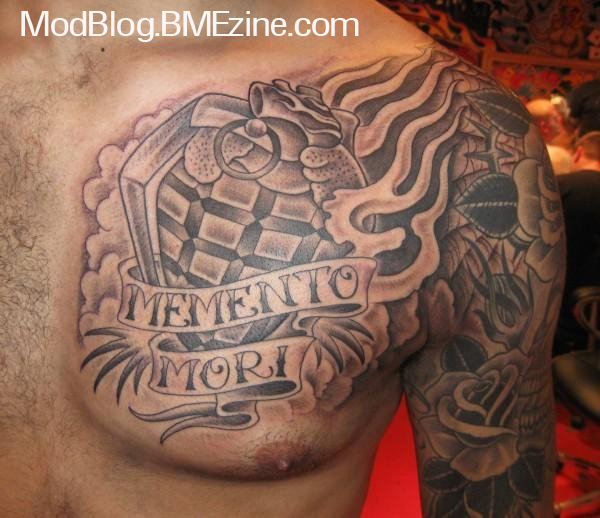