Recently a friend forwarded me a video of an art opening — the one I’ve included below — asking me if I recognized anyone. I watched the video with curiosity, and yes, I did recognize someone, seeing my friend Kala Kaiwi (who was just featured in part III of the “Evolution” series) and a number of other modified and atypical models immortalized in paint. The artwork turned out to be that of Hawaiian artist Rose Adare, who I tracked down and interviewed about her current Restraint & Revolution gallery show.

I should also mention that you can find out more about Rose and her art at her website RoseAdare.com, where you can also get in touch with her about both originals and prints (which are very reasonably priced by the way, starting at $20). Her current show will be at Holualoa’s J+ Gallery until March 10, 2013.

* Are you a modified person yourself, or more of a fan?

I don’t have any hardcore bodymods yet, though I do have a fiery tattoo on my lower back I drew while learning to fire spin in Ireland, and I have four spike piercings crowning the top of my ear. All of my piercings were done by Kala Kaiwi, our resident specialist on the Big Island of Hawaii — he’s also the model in Primal Buddha.

* How did you get into piercing and tattoos?

A lot of things drew me to bodymod. I was a San Francisco goth while studying at the Academy of Art University — another shadow in the Deathguild scene, dancing on coffins at Spike’s Vampire Bar at Burning Man! In 2005 I was in a collision with a municipal train and wound up in ten body braces. With the overall body-pain I had to escape the cold of San Francisco so I moved to Hawaii. I wound up living with the wonderful John Corbin — R.I.P., fondly remembered as Burning Man’s flaming bagpipes. He used to have a flamethrower which would set off a huge jet of fire when he wailed! His house was covered in surreal murals, and my room was a bright pink girly-girl room with a mural of Pudge the Fish (the sandwich eating fish from Lilo and Stitch). Here’s me, lying in black, in a bright pink room with Pudge the Fish. Aloha!

Years later my partner, Alex Stitt, the fire dancer in Pyro Paramour, moved into a new place with Robert Bennett, the model in the painting Ardens. I adore Robert. He’s family, and the one who painted all the murals in my old house. He’s one of the best tattoo artists on the Big Island, and unlike many tattoo artists he’s also a painter, which gives him an eye for detail and form, and his professionalism is next to known. 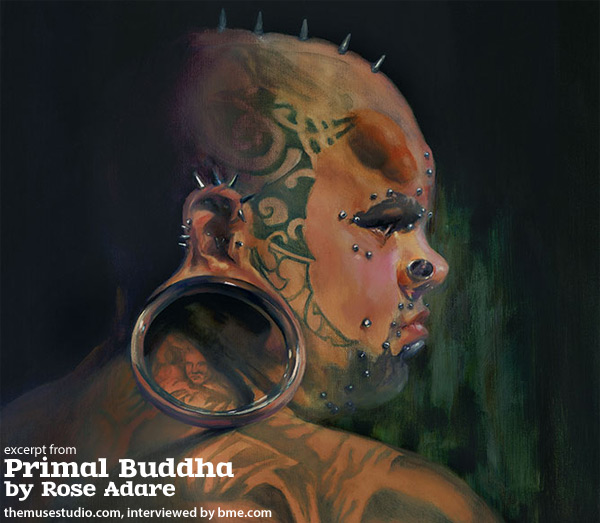 * What were you “trying to say” with this series of paintings?

When I was dreaming of Restraint & Revolution I was imagining all the different kinds of corsetry. The painting series is about how people push social boundaries, and corsets are amazing because they have transformed from a symbol of chastity worn under the clothes, to sexy, naughty lingerie worn over top. A complete 180! Everyone in the series pushes those boundaries. Kimberly Dark (Mysterium) is one of the top six LGBT speakers in the country, Carol Queen (Queen 2B4) founded GAYouth and the Center For Sex and Culture — the woman added words to the sexual dictionary! — Jason Webley (Eleventh Hour) is an underground musical genius, Buffy Saint-Marie (Sky Dance) is a Native American musical powerhouse, Ariellah Darker Still (Bring Me My Ghosts) created Dark Fusion belly dance, and Master Obsidian and slave Namaste (Genuflect) are award-winning sex positive role models. They’re all amazing because they change the world by expressing who they are. I mean, if we’re talking about body-mods and self actualization, let’s talk about Billy Castro (Bonnie is Clyde). He’s a transgender porn star. He even spoke at Stanford at the Clayman Institute for Gender Research.

* But beyond corsets of the traditional body-reshaping clothing type, you’ve also painted the play piercing sort?

Naturally, I wanted to paint a corset piercing. At the time Robert was dating the fetish model Stembot (who’s in the painting Acceptance). She leapt off the couch and said “Let’s do it!” Next thing I know, we’re at Kala Kaiwi’s mod-shop lancing eighteen hoops into her back. That’s how I met Kala. His work is brilliant. Scarification, implants, subdermals — he can do it all and he has it all. Implants in his forehead, spikes drilled into the top of his head, tattooed eyes, knotwork patterns in his skin. Everything. About a year later Stembot moved back to the mainland and Robert met Jesi Collins (Venus Unbound). She’s also an amazing tattoo artist and a wonderful mom (Robert tattooed a lot of the work on her left leg). She and her daughter came to live with us. She has a starfish implant in the back of her hand (which you can’t see in the painting because of her pose), as well as a magnet embedded in her finger to perform magic tricks like picking up paper clips and making them spin on tables. She also has a puffer-fish tattooed on her right leg so when she bends her knee it puffs up! I guess we were one fantastic, freaky family after that. We used to go down to the cliffs in the jungle and Kala would pierce Jesi’s back with these huge meat hooks then Robert would suspend her from a tree and swing her out across the water. 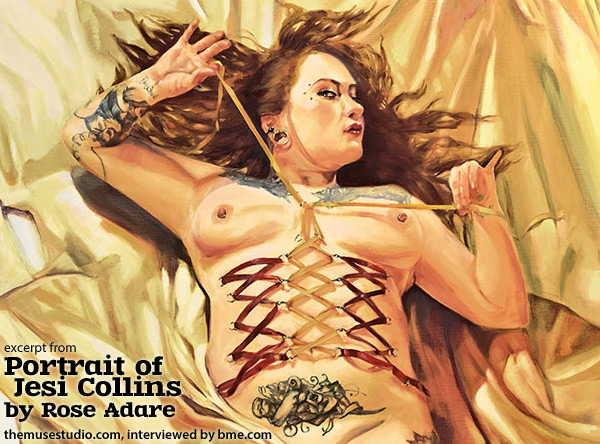 * How literal are you with your portraits?

I paint people as they are — though Koyote (in the painting Koyote) is wearing costume horns because he’s a fire performer, and I think they suit him. Sexy devil! However, people are motion, and paintings are still. What I mean by that is people, in life, transform from second to second. Every smile and frown and twitch creases the face, so the idea you have of them is an amalgam of these images — the serene, the troubled, the beautiful, the fear; all mashed together. A painting is like picking one character out of the play that is you. My painting of Kala, for example, is undoubtedly him, though only one or two aspects. Unlike photographs, paintings are more than a mere snapshot. They’re archetypes, like streamlined forms of self.

* What about with their body art? For example, do you try and be literal with their tattoos, or do you take liberties to make their tattoos match your artistic style or commentary?

I love painting tattoos because they are the literal meaning of organic art. When it comes to painting in general, I use sacred geometry like the vesica piscis or the nautilus spiral, blending and softening around the edges before bringing it in for detail. This means that certain tattoos come into focus, just as your eye would focus, while others phase out into basic shapes and color. People can’t see everything simultaneously, and that’s important to remember in portraiture. It’s one of the key differences between Classical Realism and Photo realism. An excellent tattoo painter is Shawn Barber. He focuses on the detail of tattoos. 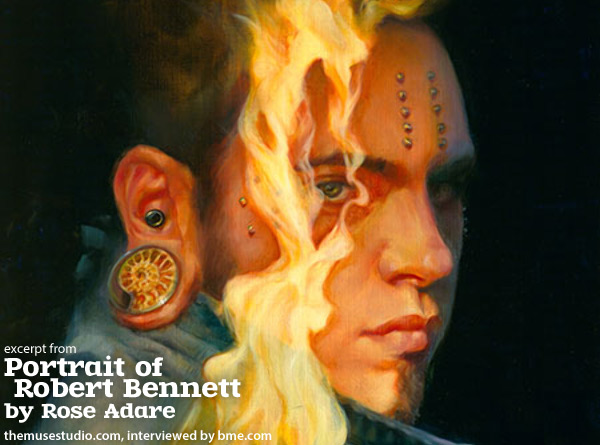 * What sort of response have you gotten to this series?

The response to my art has been nothing but excellent. Restraint & Revolution will be visiting the mainland U.S. within the next year before moving on to Europe. Yet we were careful about starting in Hawaii. Hawaii’s art is Hawaiiana. Dolphins and orchids and sunset “plein air” landscapes. Hawaii is so vibrant and colorful artists have to compete with nature herself to capture anything half as brilliant. My art, because it evolves out of Classical Realism, takes on more somber tones, and there’s nothing quite like these portraits out here. Our opening at the East Hawaii Cultural Center drew more people than they’d ever had at a single event! People came out in droves, and it was a mixed house. The classic Hawiianna art scene, the local island vibe, the hippies from the jungle, the fetishists from the off grid dungeons, the college students from UH Hilo, the vacationers fresh off the cruise ship — everyone wanted to see! And the truth is, people are often afraid to ask, especially about bodymods. They want to know “does it hurt?” or “why did you do that?’ or “how does that work?” or “is her hand really magnetic?” But at the same time that little voice says “don’t stare, don’t be rude.” At the art show we posted bios of each model so people could read all about these different intersecting, counterculture, underground, subculture lifestyles.

* Beyond capturing a sense of breaking sociopersonal boundaries, is there any other theme to your artwork?

I set out to paint nontraditional people in a traditional medium. Fine art can be so stiff and traditional. Masterfully skilled but thematic. Contemporary art, especially abstract art, can be so expressive that in the end there’s more message than talent or skill. I love the traditionalists, but we can’t all be Da Vinci. I love the innovators, but we can’t all be Duchamp. Fine art needs to evolve, in the same way that the Pre-Raphaelite brotherhood broke the mold, and the Impressionists blurred the boundaries, and the Surrealists escaped reality. But there is a magic to fine art, an alchemy in oil paint, and a soul in composition that we’re losing to Photoshop and instantaneous art. Each portrait takes well over one hundred hours, and is infused with gold leaf, and santo paolo, and whiskey, and peyote — and in the portrait of Koyote even some of my own blood. Blood, sweat and tears. That’s Fine Art. Don’t get me wrong. I believe in instantaneous art, I believe in instantaneous expression, and I believe everyone is an artist, and everyone has a message, and that’s the truth. But which iconic images survive the test of time? Some changed the very way we saw the world. Look at Picasso and Georges Braque and Cubism. But others survived because they captured time and place. Toulouse-Lautrec immortalized Montmartre, as did Modigliani. I love to celebrate people. I love to celebrate our time, and the bodymod scene is a huge part of that. Blood, sweat and tears. That’s love. That’s dedication. And that’s art. 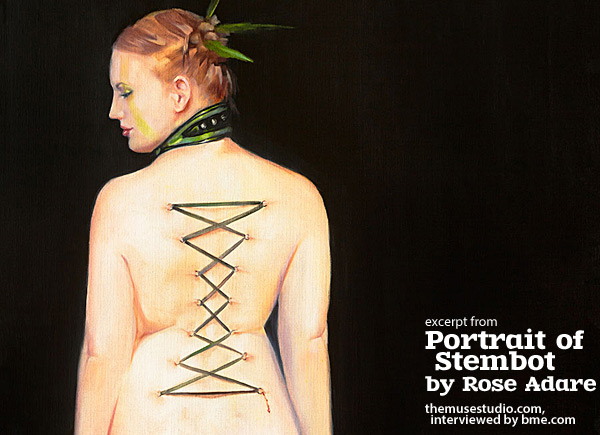