Last time I posted Diego it was just for fun, so let me include some info this time. Diego had his nostrils pierced in the normal small gauge way — they weren’t dermal punched — but after seeing Pauly Unstoppable (who has inspired more people to stretch their nostrils than anyone out there — I’d argue he is the progenitor of this look in modern times) and then being further inspired by the giant nostril plugs of the Apatani people decided he wanted to stretch his as well. Since then he’s reached 24mm (1″), which is currently quite loose so it’ll be larger soon, with a goal of 30mm or perhaps larger. I just love this picture of him! 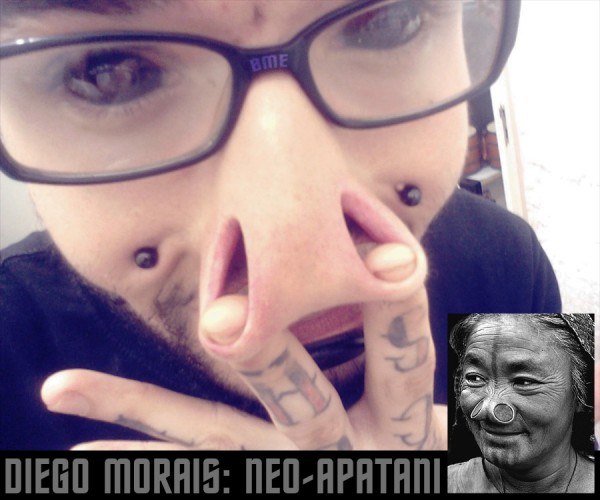 As you can see he also has his eyeballs tattooed as well, and he was just telling me about a secret project he’s considering, so I’m looking forward to seeing him evolve as the future unfolds!

Edit: It’s been pointed out that Pat Tidwell’s large stretched nostril piercings predated Pauly’s, although they didn’t have the same insane level of media penetration that Pauly’s had. I asked Pauly about who inspired him, and he told me,

“My first exposure of nostril stretching was from the Apatani tribe and a tribe in New Guinea where the males stretch there nostrils and septum very large. It wasn’t till after I found BME and saw Pat Tidwell’s nostrils that I understood that I could also stretch my nostrils. I would say it was a bit of both for me. I had wanted to do it since seeing the tribes in India but at the time didn’t think I could do it till I saw other Westerners on BME that had them done.”

One thought on “Pauly’s Kids”