I promise I won’t make a habit of reposting viral images, but I thought this one was worth it. Scott Versago, tattoo artist at Akron’s Empire Ink (empire-ink.com), got to “tackle the official #1 worst portrait tattoo in the world”. 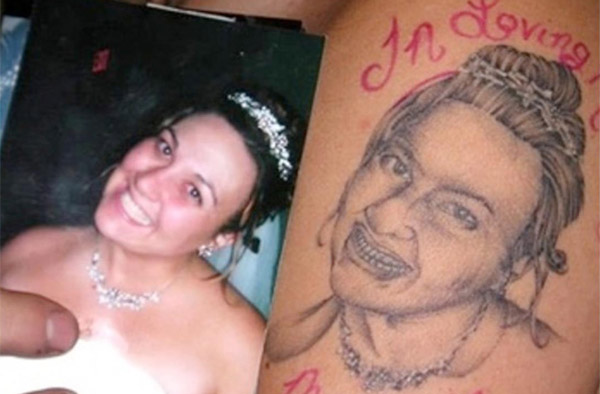 I don’t know if I’d agree that it’s the #1 worst — I’ve seen some scary portraits — but there’s no denying that this tattoo was terrible enough to make nearly every blog post cataloging portrait tattoo calamities, to the point where it’s one of the world’s most famous tattoos. As Scott says, “I’m sure you’ve all seen it a million times online, as had I.” He continues,

“I couldn’t believe my eyes when this guy walked in and showed me this project. I think my jaw literally hit the floor. He went on to tell me the story behind the portrait; He had just married his beautiful wife and not even three months afterwards she was killed in a horrible house fire accident leaving him to raise their three children alone. Shortly after he went to a local tattoo studio to memorialize his wife and was left with this abomination. He later returned to that studio for one more session, thinking that perhaps “he had done something wrong in the healing of the tattoo” and they butchered it even more the second time. Touched by his story, I gifted the entire project to him for free. Now he has closure and I have an amazing story to add to my portfolio!”

The story really puts a guilt-trip on all the posts torturing this guy, don’t they? But it is wonderful to hear the story, and it’s made even more wonderful when you see the salvation that Scott Versago provided. Click for a larger look at this absolutely beautiful proof that even hilariously bad tattoos can be saved with a rework by a talented artist. 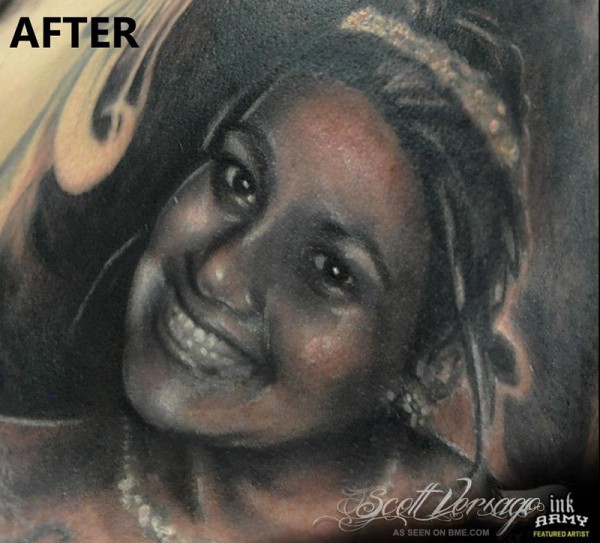