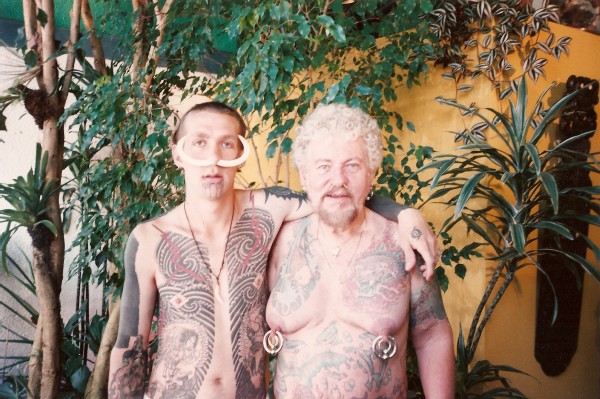 Jack and Kristin of Nomad

The first article I ever submitted to BME was a memorial piece on my friend and mentor Jack Yount.
That was two years shy of twenty years ago. I had always planned on writing more about Jack per Shannon’s request, but as time went by and other projects took my attention I didn’t get around to it. Which is strange considering the massive impact the friendship with Jack had on my life. So. I’m sorry it’s taken a few decades to get back to where I started, but sometimes it’s nice to take the long way ’round. 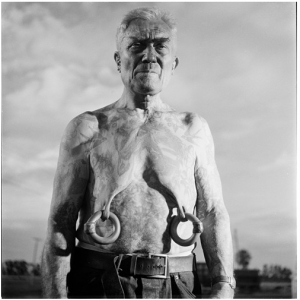 Jack was born John Andrew Yount on Sep 15, 1926. When he was nine years old, his parents took him to the circus where he saw the infamous strongman Rasmus Nielsen. Rasmus was a circus sideshow performer; a three-in-one blacksmith, tattooed man and strongman. Had that been all, he may have still influenced young Jack- but thankfully Rasmus had set himself apart from other tattooed men with the addition of tongue, septum and nipple piercings which he hung weights off of to the shock, horror and delight of 1930s circus goers. A pre-Lifto Lifto!

Seeing Rasmus swing weights from his pierced nipples never left Jack and in the 1950s while attending college Jack read about a student at a rival school who had spent a summer in Europe studying and ended up travelling around with gypsies. When he was finished with his semester abroad they threw him a party and pierced his ear which made a splash in the local papers. A friend of Jack’s who had served in the Navy decided that they “we’re not going to let them get away with all this, are we?” and Jack and twelve or so of his fellow students decided to pierce their left ears. 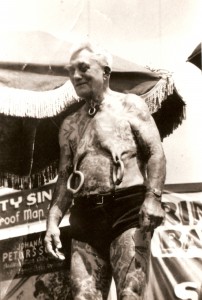 Six months later Jack, remembering Rasmus, figured that if piercing his ear didn’t hurt.. maybe his nipples wouldn’t either and with that in mind used a darning needle to pierce his nipples. Earrings were inserted and with that, Jack became a piercer. Word discretely got out and Jack began piercing friends, and then friends of friends. By the time I met him  he was already a Master Piercer with thirty years of experience, working under the name of Mr. Jay.

I was a teenager then; fifteen years old with a few tattoos that my mom had lied about my age for me to get. Piercing was something I had experimented with when I was much younger but at the time there was no real outlet for. There weren’t openly advertised piercing shops unless you lived in San Francisco, LA or some other big city and here I was smack in the center of Florida, not old enough for a driver’s license but still wanting pierced. While at Bud Pierson’s ANCIENT ART tattoo in Orlando I inquired with Bud about piercing. Not spooked by my age he said that yes, he did occasionally do it, but didn’t like to, and why don’t I just talk to Jack Yount about it? He lived closer to me than Ancient Art, and I think you two would get along. 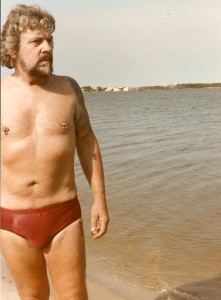 A less modified Jack on the beach

Bud scheduled my tattoo appointment to coincide with Jack’s, and soon I was to meet the man who influenced my life in ways that I still can’t fully articulate. I didn’t really know what to expect, but when I walked into the room to see Bud tattooing the very upper inner thigh of a cotton haired 63 year old… that wasn’t it. The first thing I noticed was that Jack looked like he was someone’s grandfather. The second were the 00g rings he was wearing in his stretched and tattooed nipples (which were easily 1″ by then). The third was that he was wearing a lycra thong that contained a penis bigger than a coke bottle.

Obviously I knew right then and there that Bud was right. We would get along just fine. I introduced myself, telling him that Bud had recommended him for piercing, and I know it’s weird that I’m only fifteen but my parents are right outside and if he were to talk to them they’d give consent for sure… 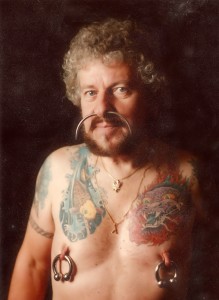 Jack waited patiently for my breathless run on sentence to finish up, smiled and said “Why don’t you all come out to my place in Zephyrhills. We’ll make a day out of it.” And we did. That first visit, my parents came with me. I can’t really express the surreality of my folks- my Dad a farmer who’s nickname was the Gator and my Mom a tiny spunky Southern Baptist- in a house filled wall to wall with homoerotic art and giant framed portraits of naked pierced and tattooed men. Needless to say- they fell in love with Jack too.

My first piercing from him was my nipple. This was a different time and place than the modern standard of Body Piercing; Jack worked out of his home. He’d offer you sweet tea, maybe an eskimo pie… as well as injectable anesthetics. “Piercing is brutal. It’s better to feel a small prick than a big one, right?” Jack did almost all of his piercings with 2% xylocaine injections beforehand. He also started most piercings at a minimum of 10g and larger if the customer asked.

While my parents sat by the pool, Jack showed my brother and I his ‘modification album’. By this point I had already tracked down every available PFIQ, Body Art and Piercing World Magazine I could get my hands on (apologies to you all, but I totally lied about my age. Sorry Jim, Pauline, Ted) but this… this was the holy grail.

Somewhere along the road, Jack had developed an interest in ‘Modifications’. I had never really heard the word in that context before; this was when the most extreme thing anyone had ever seen was Carl Carroll’s bisected penis in Modern Primitives, and here’s a whole album of things that made that look like a starter set. 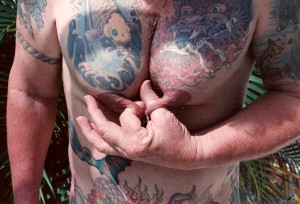 “This- that’s my friend Rudy. He has 1000cc of silicone in his bag. The Doctor did this last visit. Oh. That’s my friend Bill. We split his cockhead a few years ago”. Every consecutive photograph blowing my mind with Jack smiling, telling us personal anecdotes about the men in the album. It was surreal in how quaint it was. It never felt weird or creepy which considering the circumstances could have easily been the case.

By the time we left Jack’s place we had made a new friend and followup appointments for  PA piercings. Thankfully Jack didn’t make me bring my parents for that one! As our friendship grew he started introducing my brother and I to a collection of modification marvels; men with penises and scrotums so full of silicone they had to have custom pants tailored; men with perfectly surgically formed vaginas who weren’t transgendered; eunuchs, nullos, amputees… every visit to Jack’s house was special. 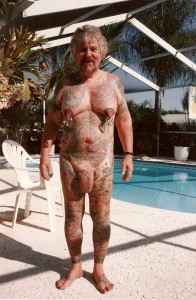 Jack himself had an impressive selection of surgical body modifications:
He had been castrated; he had his suspensatory ligament cut. He had large amounts of silicone injected into his penis (which was also subincised with a surgically split/reshaped glans) and scrotum (which contained several silicone coated stainless steel balls) and chest which was also augmented with estrogen therapy to help grow breasts. His left index finger tip had been amputated and he was tattooed from neck to toe. Before amputating his scrotum he was having issues with conventional toilets, so he had his urethra rerouted between his scrotum and anus and towards the end of his life he ever started stretching his ear lobes.

Through Jack I met his apprentice Mike Natali (who also went on to be a big influence in my life) as well as Brian Skellie who’s still a friend to this day. I learned about art and culture, music and gardening. Jack became family, a surrogate grandfather who not only taught me how to split a penis but how to be an adult. He quietly influenced a generation of modification fans via his influence on me and my connection with Shannon/BmeExtreme. He passed away in Hospital in Copenhagen Denmark on Jul 15, 1995 at the age of 68. 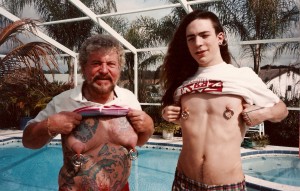 I’m not sure what he’d make of modification today with it being more aesthetic than sexual and more public than private, but I’d give anything to be able to talk to him one more time, about my life and my adventures on the road he helped me find.

Thank you Jack, for everything.

As always, if anyone has any followup questions they’d like to ask about Jack- throw them in the comments section. I really do work for tips, and my tips are you folks discussing modification, not just reading and not interacting, so if you’d like these recollections to continue… you now what to do!

Oh! And for those of you who would like to hear Jack speak- several years ago I shared some great video with Bme/News featuring Jack. Check them out!

On Piercings and Subincisions
On Silicone Injections.