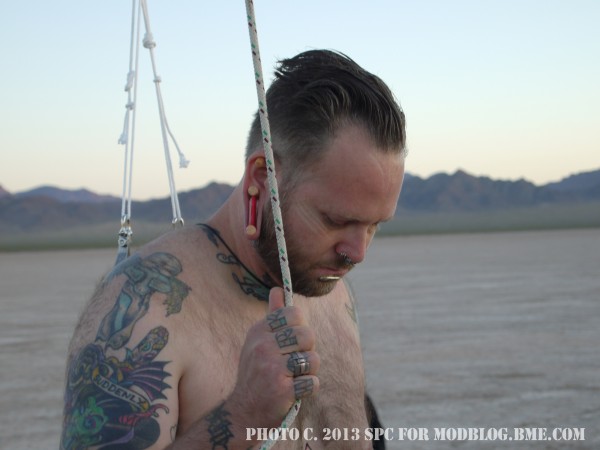 You know what they say about the road to hell.
I had planned to ‘cover’ APP for you folks who couldn’t attend. Photos, video interviews and live updates from the Conference and Expo floor. Then I got to Vegas, found my luggage literally saturated with water (SWA Baggage Handler left it out in a rainstorm) and got to the hotel already feeling a summer cold taking hold of me…

My APP experience this year was NOT ideal, Modblog Readers.
That said- it was one of the best Conferences I’ve attended. For some, it’s a yearly Bacchanal; a chance to leave the studio and real life behind for a week, stay up till dawn drinking (and then some) and debauching and oh yeah, maybe buy some jewelry and take a few of the classes we paid for. But this year saw a large upswing in first time attendees, with classes packed with people who saved all year to attend and to improve their craft. The vibe, if you will, was much different than I expected. 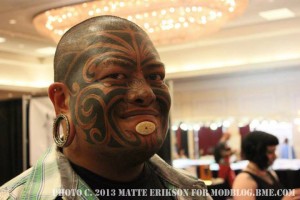 This year I found myself getting up at 6:45am (which was roughly when I used to ‘call it a night’ in previous years) to join the rest of the early risers who agreed to join my running group, taking a two mile jog down the Las Vegas strip instead of seeing how much we could drink and still maintain the appearance of sobriety. Instead of heading out to the shooting range I found myself in Paul King’s class “The Grieving Body- Does Body Modification Injure or Heal the Psyche” which for my money was his best to date, taking notes and being humbled by Paul and Kendra’s research and commitment to our community. 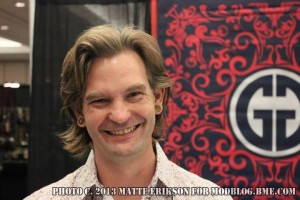 I even managed to dress up in a suit and tie and deliver a eulogy to BME founder and friend Shannon Larratt at this years banquet. I felt the love and support of an entire room full of people who shared my loss and who felt my pain as said my peace. I was glad to have Rachel there with me; the last few months have been incredibly hard on Rachel and Ari and having here there to support me like Shannon always did meant a lot. For those of you not able to attend the banquet, or those who couldn’t hear my admittedly soft voice.. here is what I had to say:

Seize every opportunity that’s in front of you and live life to the fullest. Even with everything I’ve done, there is so much more I wish I’d squeezed in. Don’t let a single day (well, maybe a single day) be idle. Have every adventure you can, and explore every street — although treat the one-way streets with caution. Don’t fritter you life away into television, random browsing.. We have such a glorious future, but never forget that your part in that future could end at any moment, so live a life that you can be pround of. And of course love and treat each other well.

Most of us will always remember where we were when we read those words.

To some, Shannon Larratt was a larger than life presence; someone who’s influence was a beacon in a dark world of parents and of friends who judged them because of their modifications- a voice that said “it’s ok to be you- there are people out there who understand” and who spent the majority of his life bringing people together.

To others he was the ultimate devil’s advocate; someone who was willing to push the boundaries so far in the name of personal freedom that it seemed he cared more about the modification than the modified.

To me, Shannon was a treasured friend. He was my cheerleader, encouraging me to do more than just submit to BME by helping me create the SPCOnline site, encouraging me to host the first ModCon (that never happened) and later the Scarwars events. His legacy will ultimately be tied to body modification, but I feel that’s missing the point of his contributions to the world:

Shannon was a historian, a published author, painter and a sculptor. He wrote code like other people write poetry. Shannon was, at heart, an artist. His favorite medium was life. He could see the human form as a canvas for expression. Human emotion as music to dance by. Human experience as performance art and divinity. He believed in forging your own path and he blazed a trail that can never be ignored, whether you chose to walk that trail with him or not. For the length of our friendship, Shannon never stopped creating. He created one of the earliest widely adopted social networking sites on the internet, before social networking was even a concept. It is because of BME and iAM that I know many of you here today.

Shannon flirted with many other industries in his accomplished career. Among them technological advancements in the realm of computer science.

If you look around at the people sitting near you, you probably know them as a direct or indirect result of BME or iAM.

Anyone with access to the internet and a search engine who had even the slightest interest in body modification, found BME, and there we found each other. There are married couples who wouldn’t have met who are together because of iAM. There are children who wouldn’t exist without iAM. iAM gave a voice to the voice-less, friends to the freeks and weirdos, and a family to the emotionally orphaned. BME built careers and legacies.

Shannon was one of those people who just had a certain “something.” You can’t quite put your finger on it, but you either loved him or you fiercely hated him. I think he was happy to inspire either, as long as he made you feel something, think something, do something.

Like Cobain, Van Gogh, Hemingway and many men with a burning flame of passion inside of him, his life was touched by suffering, and he left us much too soon. There will never be another “Shannon’s next big thing.” And frankly, I’m so mad at him for that, that sometimes I don’t know if I can ever forgive him. Then I remember, Shannon’s not in pain today, and he’ll never hurt again.

When you’re writing this sort of thing, a eulogy, you’re supposed to talk about your loved one’s background. Shannon was born on September 29th, 1973 in Victoria, BC to Richard and Kathy Larratt. He had both brothers and sisters. He never finished college, although he attempted it at least twice if my memory is correct. He married a beautiful woman named Rachel and had an equally beautiful daughter. He leaves behind thousands if not hundreds of thousands of people who’s lives he personally touched. And that, my friends, is a legacy worth remembering.

We could all stand to be a little bit more like Shannon. Bringing people together and creating lasting bonds of love. Exploring the boundaries of what we are capable. Always starting with the opposite of what the masses believe, and see if you can prove the contrary to be correct. He almost always could. The world could use more Shannon Larratts.

Thank you all for giving me the opportunity tonight to tell you a little bit about my friend Shannon. I still feel the pain of his loss every day, but it is getting to see all of your beautiful faces looking back at me that reminds me that although he is gone, he will never ever be forgotten. He has changed the course of human history, he turned the paper over and wrote on the back side and didn’t care if the marker bled through, he took the fabric of society, cut it into pieces and sewed it back together into the shape of a better world. I encourage you to find me or another loved one this evening and tell us a story about Shannon or about how he touched your life.

And of course, Love and treat each other well.

It was hard having to speak those words in front of so many people that I love an respect, because it meant that Shannon wasn’t there to hear them. I still have issues with that; the reality of that and I think that there was a sense of that in the air as we all tried to be better this year. To try harder. To make every moment count. I can’t speak for the other attendees of APP2013, but for me it was a very different Conference. 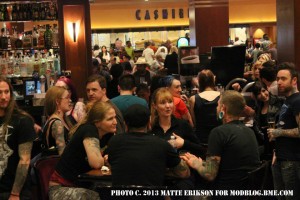 This year also saw the “official” announcement of the ISA: The International Suspension Alliance headed by Allen Falkner and a team of volunteers who are working to establish what has the potential to be a much needed lobby for suspension rights and responsibilities. It’s still in early development and admittedly there are more questions than answers, but if you’re a suspension practitioner or supporter, it’s worth checking out:

If you listen closely, you can hear my girly voice somewhere in the middle, opening a can of worms as always but still hoping that “something is better than nothing”.

I ended my trip in the desert with some friends, old and new, watching the sun rise as Neeko suspended himself. with the rays of the rising sun focused through his glass orb branding his own torso. Exhausted, still sick and knowing that I had a flight and a full night of work ahead of me I was smiling; the sense of community that I had been missing was back. Friends being there for each other through thick and thin, good times and bad… that was what APP meant to me this year. That we are united by what we have in common as well as what we don’t. I make a yearly pledge that ‘next year I’m not going to go’.. but this year, I found myself on the plane looking through photos and planning next year’s APP2014 adventure in my head.

Thank you to everyone who made this year so amazing; Jenna, Stephen, Rachel, Orb, Bethra, Ron and Nakota, Paul, Janet, Wayde, Brent and the rest of my extended family- I love you all.

And special thanks to Matte Erikson for letting me steal some photos!
As always- I work on tips, and my tips are you folks commenting and discussing on the pieces I write. I took the time to write it, you took the time to read it so give me that extra two minutes and leave a comment! Let me know that you liked it, hated it, etc.