I wish that this story had a happy ending, and I apologize that the majority of my Modblog articles turn out to be memorials, but as a community archivist it’s part of the job.

I had just turned sixteen when I lied about my age and ordered every issue of PFIQ that Gauntlet had in stock. I had seen images from them in the seminal RE/Search Publication MODERN PRIMITIVES, but getting them all was a piercing nerd’s dream. 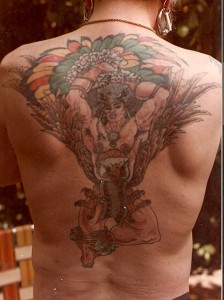 I spent years trying to track him down with no success; he had lost touch with the piercing world (his only real connection being the PFIQ covers) and was seemingly unfindable. I had stopped searching when I happened upon an envelope featuring his artwork, thumbtacked to a cork board in a cubicle in my office.

I risked writing him an introduction letter, asking if he’d be willing to talk to me about the ‘old days’. Not only did he consent, but I was shocked to find that his next door neighbor was a good friend of mine!  We corresponded back and forth for a while, discussing him doing a t-shirt design for SPCOnline and the possibility of meeting in person. 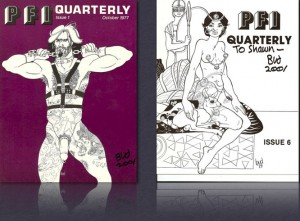 I wish I could share that with you folks, but in an epic comedy of errors my film (this was pre digital camera) was exposed and ruined by airport security and I lost the cassette with the interview somewhere in Arizona. I always planned to go back out there and re-interview him, but these things slip away and before you know it, it’s too late.

I was contacted this morning by my friend Jennifer (Bud’s neighbor) with the news that he had passed away. He leaves behind a legacy of art that captured the imaginations of the subcultures he worked in.