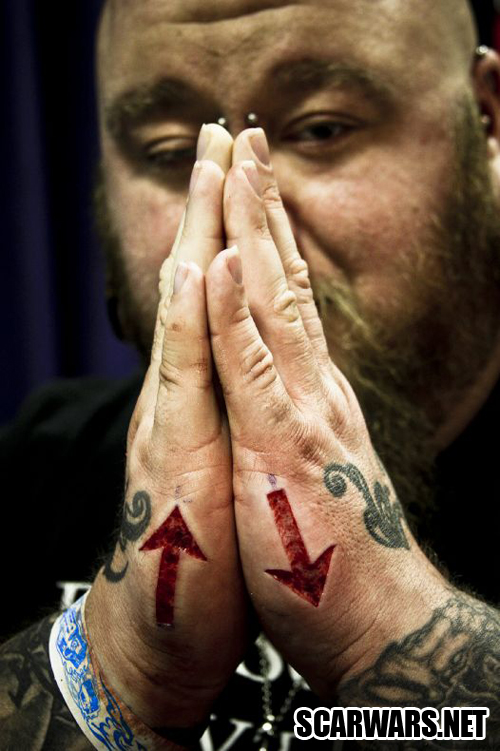 “i had a dream a while back. in it, i met myself. the me that i met greeted the dream me in a way that i often greet people, with hands raised together as if in prayer, a sign of coming in peace. in this dream, the other me had scars shaped like arrows on the heels of his hands. one pointing up, one pointing down. i woke from the dream with this image burned into my mind. over time, the symbolism became clear to me…

as above, so below. the sacred and the profane. heaven and earth. good and evil. black and white. brain and body. what goes up, must come down. there are a million examples and ways to describe the idea, but it all comes back to balance. none of these things would exist without the other. they may occupy opposite ends of a spectrum, but they are inextricably linked to each other. my goal is to maintain that balance in my life. to have one foot in each world. these scars will remind me of that.” – Josh Burdette, Scarwars.net

(I wrote this before noticing that my old friend Sean Philips also wrote a memorial for Josh; forgive us for double posting, but Josh is worth reading both)

The first thing most people thought when they met Josh Burdette was usually “that’s one big mother fucker.” OBMF. That’s how I first got to known Josh, back in the glory days of the late 1990s Body Modification scene of rec. arts.bodyart and the IAM.BME community site. Josh was a larger than life presence all around- a fixture in the D.C. Music scene as the Manager and head of security of the 9:30 Club since 1997, he stood as the WALL OF BEARD at countless shows. An imposing figure, Josh could have relied on his size to intimidate people, instead, in 2006 he had this to say about ‘bouncing’ to the Washington Post:

“A bouncer is looking to bounce people. It’s a reactive way of doing things. We’re the face of the club, and we have to do our best to be as friendly, polite and accessible as we can. Some of us look big and scary, but we’re just people, too. We’re just working our jobs.”

I saw him, not too long ago, at the Stay Calm memorial we held here in Philadelphia for Shannon Larratt; we hugged like we always do, gave some colorful commentary on the state of the world and the Body Modification community, and finally getting to the point of why we had all come together that day as a community- remembering our friend- he laughingly told me that we were going to have a moratorium on any of our friends dying till at least 2015, to spread the word to the people we love that they’re to stick around for a while.

I wish Josh would have been able to keep up the pact.

Josh Burdette passed away in Washington DC on Sunday September 1st. He was 36 years old. I’ll miss running into him backstage at LUCERO shows, chatting about our lives instead of watching the opening acts. I’ll miss bitching about ‘these kids today’ with him, reading his latest ‘Wall of Beard’ comic strip adventure and getting one of his epic bear hugs. I’ll miss Josh.

Shawn has spent the majority of his ife in the modification world.
In addition to writing poorly for Modblog, he also edits the often neglected Scarwars site, the more frequently updated Occult Vibrations tattoo blog as well as his personal diary at Sacred Debris. He lives in Philadelphia with his faithful Italian Greyhound Bailey, and a steadily growing Pushead collection.