Some of you may remember the interview I did a year or so ago with scarificarion wunderkind Ryan Ouellette. Those of you that do will know what high regard I hold him and his work in. The gorgeous cherry-blossom cutting below is just one example of his detailed and innovative flesh-removals, and you can see plenty more on BME

I’m delighted, therefore, to be able to announce that Ryan, one of the best scarification artists on the planet right now, is leaving the wilds of New Hampshire for a few weeks in December, and heading for London, England. He’s going to be available for scarification appointments while he’s over, and as it’s a short trip, you need to get in quick to be sure of securing a spot.

If you’re interested in getting some work by him, drop him an email at [email protected], or contact him via his IAM page.

The Times, the BBC, amongst others, are reporting this week of a significant breakthrough in transdermal technology. Scientists at University College London, and their corporate partners Stanmore Implants Worldwide have developed a method of allowing skin to heal, around transdermal implants such as prostheses for replacing amputated limbs and digits. 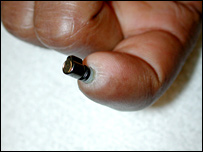 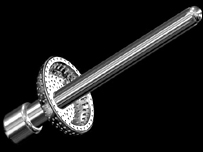 This is a wonderful example of the increasingly popular methodology of biomimesis, where chemists, engineers, architechts and those from a massive range of other disciplines take inspiration from and try to copy or replicate tools already evolved in the natural world. The theory of biomimetics is that if nature already has an elegant solution to a problem, why not attempt to synthesise that solution and apply it to a range of other situations? In this case, the UCL researchers realsied that, whilst humans have great trouble healing strucures which protude outwards from under the skin, deer, with antlers that are fused into their skulls but protude through the skin, sealed by a sturdy and impenetrable skin pocket, have no such difficulty.

You can see a sample image (from the BBC) of the type of solution they developed, based on the root structure of deer antlers. The subdermal base s full of tiny holes, which allow the skin to “mesh” into the implant and successfully incorporate it into even really motive areas like the thumb. It immediately struck me that something similar to the implant prosthetic these scientists have developed may be one direction in which the body modification community might be able to push cosmetic transdermal technology beyond the dismal rates of success it currently achieves. I sense implants with porous bases that are dotted with tiny holes would be immensely difficult to remove, but they’d certainly gain a massive amount of stability, and be effectively sealed from the types of inward travelling infections that have been documented in this community recently.

Seeing as things have gotten stupid round here, recently, I hope you’ll excuse me if I temporarily up the pretension academic quotient.

Macquarie University in Sydney, Australia has been running bi-annual conferences for the academic study of body modification and related subjects since 2003, and the next one, entitled ‘Somatechnics’, has just been announced for April 2007.

‘Somatechnics’ is a newly coined term used to highlight the inextricability of soma and techne, of the body (as a culturally intelligible construct) and the techniques (dispositifs and’hard technologies’) in and through which bodies are formed and transformed. This term, then, supplants the logic of the ‘and’, indicating that technes are not something we add to or apply to the body, but rather, are the means in and through which bodies are constituted, positioned, and lived. As such, the term reflects contemporary understandings of the body as the incarnation or materialization of historically and culturally specific discourses and practices, and of activities involving bodies – in medicine, information technology, education, the arts, surveillance, science, law – as fundamentally formative and transformative, cultural and social.

Abstracts (approx 500 words) are invited for papers/performances/panels for the Somatechnics Conference to be held at Macquarie University, Sydney, Australia on April 19th-21st 2007. This is the third in a series of bi-annual conferences: previous conferences were Body Modification: Changing Bodies, Changing Selves(2003), and Body Modification Mark II (2005). Somatechnics’ is the inaugural conference of the Somatechnics Project, a research network whose membership is international and cross-disciplinary.

I hear from previous attendees that, as is sadly so often the case amongst those who make their careers trying to understand the modified individual and the modified community in general, the number of people attending this event who are modified themselves is depressingly low. Of the prominent academics in the field, few have more than a small number of token tattoos, and from what I’ve been told of the papers presented in previous years, the insights offered have often been massively wide of the mark.

In light of BME’s current front-page poll, I’m posting this because I know that there an ever-increasing number of modded postgraduates whose research is, or would be, very pertinent to the study of their own community. Although there have been two or three worthwhile and sympathetic academic books on body modification in recent years, not one has been written by a heavily modified individual. Although there are a smattering of PhDs on mods every year, there are, as yet, no high-profile academics with heavy mods.

If you’re an postgraduate or even just a passionate and committed independent researcher, I urge you to consider submitting papers to this event. I’ll be there (whether my paper is accepted or not) and I hope to see more sleeves, tongue splits and implants there than have ever been collected at an academic conference before.

Normal service will now be resumed