When biggernostrils submitted this photo it made me realize that although ModBlog has thoroughly covered Achilles piercings in the past I very rarely see them crop up. It isn’t surprising to me as there are multitudes of potential complications including but not limited to things like healing times up to 10 years and well…shoes. All risks aside I cant say I have ever seen a double Achilles piercing. 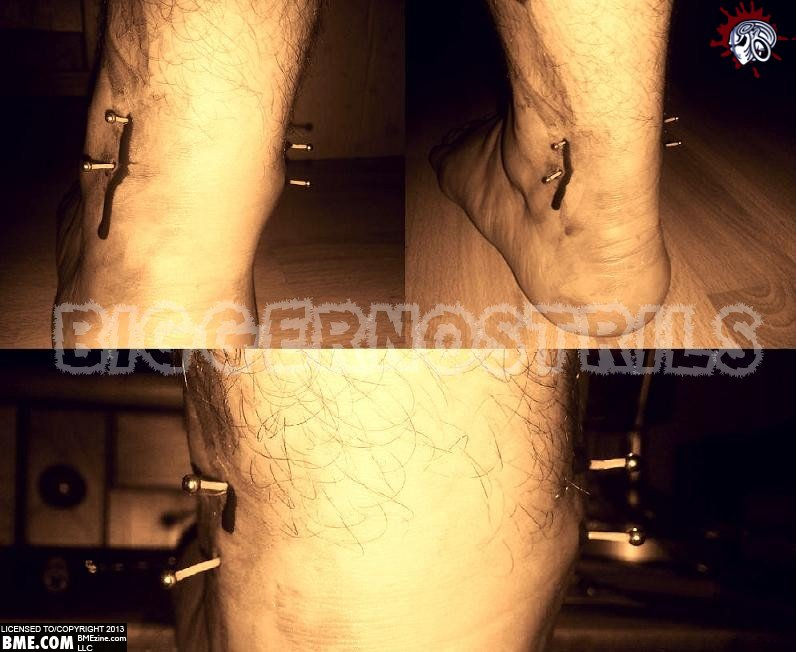 I would be interested in getting a follow up on this so if you’re out there biggernostrils give us a little background!

To all of us picky piercing types out there I leave you with a quote that Shannon added to one of the first posts on this subject.

“Since there are some serious comprehension issues with this entry getting people even whinier, let me be perfectly clear: I couldn’t care less if a piercer feels that they don’t want to do this, and personally I don’t think this should be offered on the walk-in public. Where I have a problem is if people say that no one should be doing or getting this modification (or other heavy mods). Body modification is where it is today because people informed themselves about the risks and tried new things, often with what seemed like serious dangers at the time and when that ends, body modification begins to die.”

I’ve posted about Daniel Rutt’s amazing piercings elsewhere (and Rob featured them ages ago in a “guess what” post), but I thought ModBlog deserved me taking the time to talk to him about them in detail. The story begins just over two years ago when, a week before Christmas 2010, Daniel had Patrick Kielty (of Body Alter in Worksop, England) do the pair of deep achilles piercings using 1.6mm (14ga) PTFE flexible rods, prescribing the normal simple aftercare of using salt water solution to keep them clean.

Before I talk more about Daniel’s life after leaving the studio, I want to quickly share what Patrick told me about doing the piercing. First he did lots of anatomical study, which lead him to decide that if when he felt for the “sweet spot” he would only continue with the piercing if the tissue was minimal an he was quite certain he wasn’t going to be hitting anything he shouldn’t. Luckily in Dan’s case he could “practically feel [his] thumb and finger touch”, so they went ahead with the calculated risk of skewering him with a needle running between the achilles tendon and the bones of his leg and ankle. From the piercer’s point of view, Patrick described it as something akin to a scaled up handweb, and quite soft to get through. 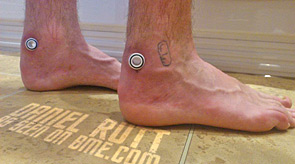 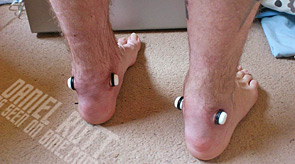 As you can see, it’s a lot bigger than 14ga now, because every few months he’s stretched it up (much to Patrick’s surprise incidentally). Initially he did this by using different sized PTFE rods, which he found extremely painful due to the rods jumping up in size 2mm at a time — squeezing them through the piercings was difficult and uncomfortable. Once Daniel reached 6mm (about 2ga), he gave up on this method and switched to packing the piercing with a whole bunch of small 1mm (18ga) PTFE rods. Every time he felt ready to stretch he would push another small rod into the middle (or sometimes two, but never more). It was still slightly uncomfortable, but overall the method worked well and in any case was a big improvement over the larger steps in his initial method. Because of the smaller increases, he spaced them just under a month apart.

END_OF_DOCUMENT_TOKEN_TO_BE_REPLACED

This is a good one.  Not only is it going to be hard for you to guess, it’s also going to be something you may not have seen before, or at least haven’t seen in a long time.

Sorry for the blurriness.  I had to crop it small and blow it up, otherwise it would have given it away.

Think you know what it is?  Read on to see if you’re right.

END_OF_DOCUMENT_TOKEN_TO_BE_REPLACED

The last posting of an Achilles piercing here on Modblog generated a number of whiny complaints about how unviable and dangerous it is from conservative piercers**. Now, my feeling is that in what I hope will always remain a rebel artform — rather than an “industry” — that there’s no space for conservatism (or whining), so with that in mind there’s a Mr. Tetanus interview pending.

Mr. Tetanus, a performance artist, wears a self-made 10mm spike through his ankle, behind the Achilles tendon, and has had it now for about twelve years. In the picture below you can see it now, as well as a photo looking through the hole and showing the displacement of the tendon. He doesn’t take it out much because the hole closes up within about a minute, and begins to reseal itself within half an hour.

He uses the piercing in performances, swinging bowling balls and other weights (another performance artist — “Angel” — has actually hung from meat-hooks worn in this piercing), so it can definitely take quite a bit of abuse without crippling him. That said, he emphasizes that he doesn’t recommend anyone else try this, and notes that even after twelve years it’s never truly healed (that said, it’s not as if tongue piercings ever “truly” heal for many people either) and in theory continues to put him at risk.

Risk, Schmisk!!! Anyway, I’ll post the full interview soon, but I couldn’t resist putting up a teaser and a photo of his remarkable ankle!

** Note: Since there are some serious comprehension issues with this entry getting people even whinier, let me be perfectly clear: I couldn’t care less if a piercer feels that they don’t want to do this, and personally I don’t think this should be offered on the walk-in public. Where I have a problem is if people say that no one should be doing or getting this modification (or other heavy mods). Body modification is where it is today because people informed themselves about the risks and tried new things, often with what seemed like serious dangers at the time — and when that ends, body modification begins to die.

A few days ago I posted one of the small number of ultra-rare piercings, the eyelid ring, and I wanted to follow that up today with the even rarer, and arguably more dangerous, Achilles tendon piercing. This piercing literally passes through the small gap in between the Achilles tendon and the junction of the fibula, tibia, and talus junction — it goes without saying that if problems arise, they can be literally crippling… This particular example was done by David Bendele of On The Edge Body Art Studio in Findlay, Ohio.