Oh, you know exactly what it is, keep reading to see it being cooked.

END_OF_DOCUMENT_TOKEN_TO_BE_REPLACED 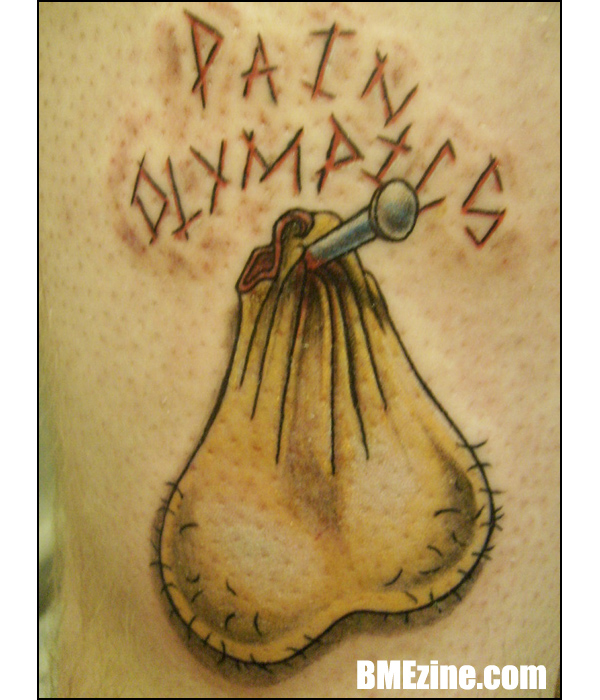 There’s a proud and storied tradition of steering apprentices towards amusing and potentially embarrassing tattoos (more), for loyalty’s sake, which is one of those traditions that rubs some people the wrong way, but, hey—as long as there’s no real coercion, a funny tattoo is a funny tattoo. Well! Aaron Chapman, the owner of and head artist at Eternal Ink in Madisonville, Kentucky, sends in this BME Pain Olympics-inspired tattoo, forever etched in place on the leg of his apprentice, Michael Agnew. That Pain Olympics video was a hoax (shh, don’t tell all the YouTube reaction-video participants!), but this? This is as real as it gets. Ha ha, balls.

What, you didn’t think I’d go the whole day without giving y’all a Casual Friday picture, did you? And really, what better way to head into the long weekend than with Cameron, a true American if there ever was one. He’s a simple man who lives by a simple code, who enjoys simple pleasures: He likes his beer cold, his T.V. loud, and his testicles a-danglin’. Click through to de-Bud, of course.

And that’ll be that, kids. What went down this week?

- Andy covered his wang, tilted his chin and showed us his vertical lowbrets.

- BME is having a sexy sex toy sale, and Katy got so excited that she ended up covered in blood somehow.

- Marina checked in with another gorgeous large-scale piece.

- Our unabashed hipster post is at well over 100 comments and counting. I have no absolutely no idea what will spur an emotional reaction from our readers, apparently.

- If you can, please help Matt Brawley and CoRE.

And there you have it! I’ll poke my head in over the weekend, and then we’ll fire this bitch back up on Monday morning. Until then, ModBloggers, enjoy yourselves, stay safe (unless you’re firing off an M80 in my honor, in which case please be as reckless as possible) and, as always, thank you for your continued support of BME.

[Chicago Sun-Times] Hey, Chicago sports-fans! Think you’re the biggest homer around, with your shelf full of bobbleheads and closet full of jerseys and your vial full of Jay Cutler’s…”essence”? Well, think again. As the photos from Ruben Brown’s Motorcycle Run—”a charity ride that raises cash for the Salvation Army”—will show, Glenn Timmermann’s got you beat.

Timmermann, 45, a Round Lake Beach factory manager who has covered his body in Bears-related tattoos. He has 92 autographs inked on to him permanently, highlighted by Da Coach’s signature across the back of his skull.

Ninety-two Bears-related autographs! Sweet fancy Moses. (This also bests the previous ModBlog record-holder of 89 autograph tattoos, for the record.) That said, I’d be more impressed if he got all of these folks to actually tattoo their own signatures into him. Take it from me, kids: You haven’t lived until you’ve been laid out on Mike Ditka’s lap while he taps his name into the back of your head with one hand, eats several pounds of wings with the other hand and calls you a pussy with either fiber of his being.

[Swing By The Balls] Once upon a time, Trent Reznor of Nine Inch Nails got his hands on an old BME video called “Roy’s Nut Hang.” I don’t remember the exact story, but he and his band watched it in the studio and everybody, to a man, was thoroughly disgusted, with Reznor calling it something along the lines of “the sickest shit I’ve ever seen,” before the damn kids turned “sick” into a good thing. (Reznor, keep in mind, had worked with Bob Flanagan on the “Happiness in Slavery” video, so he was no stranger to BDSM and extreme body manipulation.) All of which is to say, I’m not going to say the linked video necessarily compares with Roy’s nut hang of yore, but it’s one hell of an impressive feat nonetheless, and there’s a gold star in it for anyone who gets ol’ Trent to watch it.

[Daily Record] Well, here’s a real piece of shit. Local scumbag Jeffrey Dekmar of Stockholm, New Jersey, a 17-year veteran of The Tattoo Factory in Roxbury, has had a mess of legal troubles lately. This is just abysmal:

Dekmar was first accused in February of sexually assaulting a client at the Ledgewood tattoo parlor while inking a Hebrew prayer on the 23-year-old woman’s upper thigh on Feb. 21. Shortly after he was arrested on that sexual assault allegation, he was served with a second complaint that stated he rubbed his genitals against another woman’s genitals, without her consent, at The Tattoo Factory on Feb. 21.

The patron who wanted the prayer inked on her skin has alleged that she refused Dekmar’s request that she remove her underpants, but that he tugged them down, digitally penetrated her, and then said, “My bad,” according to an arrest complaint.

Holy crap, guys! Does that work? Can you just pull down a girl’s underpants, poke around a little and then get out of it with a simple, “My bad”? Jesus. Somebody give this guy the Nobel Prize. Anyway, this failure is back in the news because he’s been charged with breaking into his former place of employment and stealing about $200—this, of course, while on bail following that whole fingerbanging fiasco. Of course.

Quick! Someone steal the Nobel Prize we just awarded to the fingerbanger up there and give it to the ad wizards who came up with this scheme. But seriously.

Sorry about the late post today — we were, uh … gone fishin’. Nice day out on the beach, but I have to say, it was a little drafty.