Presumably to reconnect with her Nephilim heritage, Alessandra Annunaki, whose ancestors moved here generations ago from Nibiru — about 450,000 years ago to be specific — she had a set of incredible pointed ears constructed. She’s got about as extreme a point as is possible and I totally love how it turned out. The work is by Pineapple Tangaroa of Shaman Modifications Tattoo and Body Piercing in Austin, Texas. Other than pushing the fold farther than normal, he says the procedure was pretty standard, with some extra support via Steri-strips (adhesive butterfly sutures).

I met Maee a while back when she and her boyfriend Russ Foxx (who I’ve known practically since he was knee-high to a grasshopper) came by to host some suspensions at my studio, and I can assure you that she is very beautiful and doesn’t need to change anything. But what I think or what Russ thinks or what you think doesn’t erase the damage that was done to her psyche as a child — something I’m sure all of us can relate to in our own way, unfortunately. Ever since a young age she was teased about having big ears, and being called “Dumbo” throughout childhood made a deeply negative impact on her confidence as an adult. She remembers ears being hit by a ruler, being called nasty names, and even being dragged down a hallway by them in highschool.

Maee approached many cosmetic surgeons trying to find someone who would help her, but all they could offer her was “otoplasty”, a procedure in which the ears are folded back toward the head, making them stick out less. This wasn’t what she wanted though — Maee literally wanted smaller ears, perhaps by cutting part of the cartilage out and restructuring the ear in some way. She wasn’t bothered by how much they stuck out — it was their physical size that upset her. But no plastic surgeon was willing to tackle the job.

Even highly experienced cosmetic surgeons are very averse to creating new procedures, unlike practitioners in the body modification industry, who enjoy and excel at the evolution and outright creation of procedures to match the dreams of their clients, so it was serendipity that Maee and Russ fell in love. When Russ understood what Maee went through with her ears, he offered to modify the ear pointing procedure to meet her needs. The results couldn’t have gone better — her new ears look completely natural, but smaller. I was so happy when I read how she felt afterwards,

“He changed my life in a way I never thought could happen. I cried so hard after I got to see my new ears. I felt a sense of relief, I gained more confidence, and I felt as though all those hard years of my life had all faded away in just one single moment.”

In the photos above the inside pair are the “before” photos, and the outside pair are the “after” photos. Since it may not be obvious — and I think the fact that it’s not “obvious” is proof of just how well this was executed — I’ve made a little animation where you can see just how well this turned out. I’m pretty sure I’ve kept things quite accurately to scale. On the right you can see the size of the triangle of flesh that was removed.

When you compare Mechanical Demon (tattoo artist at Harness in Helsinki, Finland) from 2007 to 2012, you can really see what an improvement the jump from tattooed and pierced person to full heavy-mod enthusiast has made. In addition to some more tattoo work, I can also see that he’s added some sternum implants, a pair of transdermal implant spike horns, radical ear pointing and I think lobe removal, as well as black eyeball tattoos. Really checked off that wish list quite successfully, didn’t he?

You can zoom that picture but the others in this entry are at full size. Anyway, to no small part because of his striking and eye-catching appearance he’s had the opportunity to model for some great photographers, but one shoot that really struck me was this amazing photo by Tinttu Henttonen, with make-up by Mia Magia. Click here for a close-up that shows his ear very nicely — the reshaping work that was done on it is quite something.

Another photo I liked was this old-time portrait, which also shows his mods nicely and reveals one that I’d missed in the first photo, a set of subdermal horns higher up the scalp, a placement that works very nicely with his transdermal spikes (but might otherwise look odd on its own).

With his vast assortment of modifications, the Mechanical Demon has transformed from a human into something much more.  While I don’t have the list of artists who have worked on him, I do know that Arseniy Andersson is responsible for the ear pointing/reshaping.

According to Arseniy the best snipers are elves.  Now when I think of elves I tend to picture them with a bow and arrow, but I suppose a sniper rifle works just as well.

In addition to being a member of Russia’s #Leeds Suspension Team, Arseniy Andersson is an accomplished body modification artist.  One year ago Arseniy pointed this young woman’s ears, and here’s how it looks today.  If I’m not mistaken, at least one of the multiple piercings she has is going through the pointed area.

Pictures keep popping up from Efix‘s Australian tour from earlier in the year.  These pointed ears on SurgicalSteel were done while Efix was visiting Melbourne’s The Piercing Urge.

Well leave it to Samppa to deliver.

Ear pointing as a practice isn’t anything new, however, Samppa has started to use a brand new technique to point ears that is completely different than folding method that is most commonly used.

He starts off with a normal looking ear..

Then instead of cutting and folding, he takes the ear and reshapes it, leaving a much smoother and more natural looking pointed ear.  Here’s how the above ear looked right after the sutures had been tied off.

Here’s a side by side comparison of another ear, this one after it has had some time to heal up.

If you have been looking to get this procedure done, and you live in the USA, then you’re in luck as Samppa has just started his US Tour.  He will be in the US till June 2011, please contact him at [email protected] for info on the tour, booking of appointments and his availability for guest spots at studios. For anytime after June 2011 please contact him via his website, www.voncyb.org

There are still a couple of new procedures that he’s doing, so keep checking ModBlog, as we’ll be showing you some of the other new tricks Samppa has up his sleeve.

Bet you didn’t know Santa was down with suspensions? 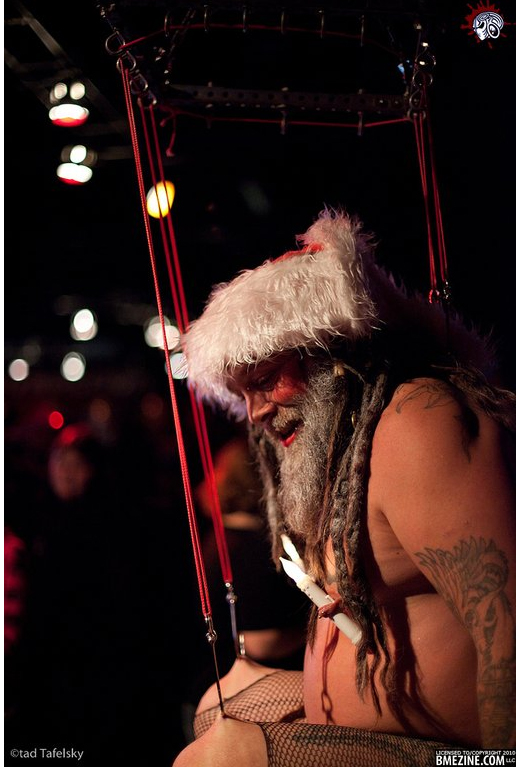 I’m not sure if the group at this event is called Escape Suspension but the photos all carry that title. It took me a minute to notice the lights in “Santa’s” nipples! I think I was focused on the beard… I guess if that’s Santa in the first picture then maybe we’ve got one of his elves suspending in this next one? 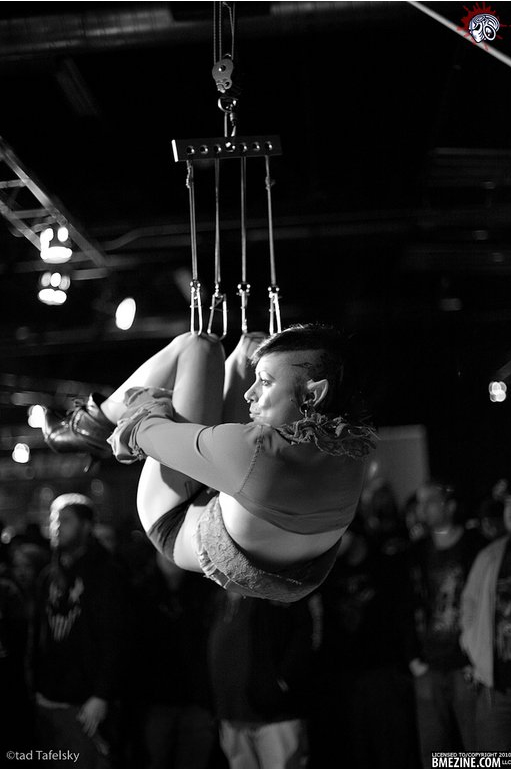 I don’t know about you but I think this looks like one fun event! I wish I could have been there.

Alright folks, enjoy yourselves this weekend and be safe. I’ll be back with a book review sometime very soon and Sean promises some great stuff in the new year so keep your eyes on ModBlog and enjoy the last few days of 2010!

To some, getting their ears pointed is one of the last steps they can take with their upper ear.  Well Zephyr*Elf here has shown us that not only was she not finished with her ear pointing, she also intended to get them pointed a second time.  Back in July she had the opportunity to meet up with Efix Roy and have her ears pointed for the second time.  The initial pointing was done by Lukas Zpira, who did a fantastic job, but for the look Zephyr was going for a second pointing was necessary, as you can see by just how pointed the end result is.  In addition to the second pointing, he also scalpeled her lobes, with her 20mm lobe going to 1 inch, and her reconstructed lobe being reopened to 10mm.  So, now that a few months have passed, you can see just how well everything healed up.

If you want to see photos of the ears just after the procedure, you can find them on her IAM page.