In recent years, most of the scarification pieces I have seen have been pictures of something. For instance, recently on modblog Rob featured a Game Boy and a BME Heart Logo.  Those type of scars are cool and all, but there is something purely primal to me about a scar that doesn’t explain itself so easily.

Take for instance this piece. First off, to those outside of the body mod world, this probably looks like some sort of accident or injury. With it’s jagged edges and general randomness, I can see where they would get that idea.

For a healed pick and a little more Sean rambling, keep on keeping on.

END_OF_DOCUMENT_TOKEN_TO_BE_REPLACED

This fantastic tribal rose is the work of Anders Allinger of Flesh Impressions out there on the Gold Coast, from where our own BME World Tour crew has just returned. 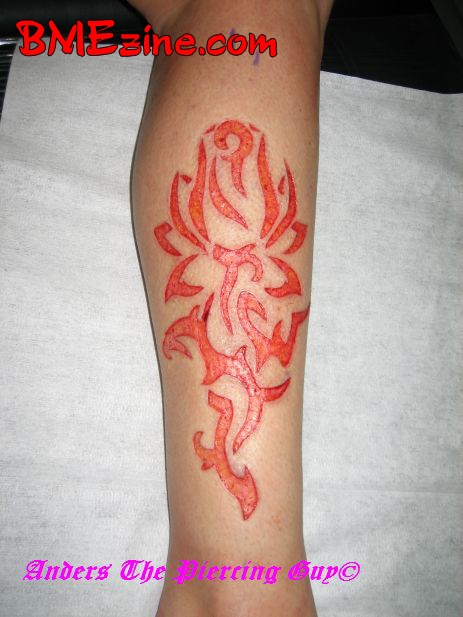 Jawn sent me the photo of a flesh removal piece he did in less than ideal conditions. I am a big fan of simple geometric design scars and this one has extra sentimental value because it looks like a (better done) version of my first ever flesh removal attempt I did many moons ago.

She has been asking me for that for months. Then her shop burns down. Then I’m in an old soviet era apartment, one light bulb that went out right before I started, so I waited till the morning…… Going on missions for supplies since all her’s burnt up, shitty Russian scalpels, straight chlorohexidine from the pharmacy to clean her, can’t read shit, everythings in Cyrillic, where there is a will there is a way!!!!

A lot of people are under the impression you can only get mass produced crap at the mall. I see where they are coming from, most the independent stores with different, interesting stuff have pretty much vanished, and in their place are chain stores selling out the subcultures.

However, in  Edmonton, Alberta Canada there is a mall called  West Edmonton Mall…

and in  that studio is a man by the name of Wayde….

and Wayde creates some of the best scarification in the world, such as this piece he recently did.

And all of the sudden the mall doesn’t seem like such a lame place.

Hello Modbloggers, Sean Philips here (IAM: LexTalonis). As one of the new guest contributors to Modblog, one thing I want to do is a regular “From The Vault” feature. Modblog has featured the latest and greatest in mods since it’s inception a few years ago, but there are tons of amazing, classic pictures just growing stagnant in the farthest back pages of BME that really show where we as a community came from, and in some cases, where we could still go.

For my first entry I want to go back to the early 21st century, a time when scarification as an art form was developing rapidly. On Modblog we feature AMAZING scarification pieces that rival tattoos for the amount of detail that they contain, but this super detailed scarification is a very recent addition to the body mod world.

In fact, it wasn’t that long ago that the concept of flesh removal to create an artistic scar wasn’t even common. This piece was my, and several other practitioner’s first exposure to flesh removal. The removal was done by Toro, one of the pioneers of flesh removal scarification. The branding was done by Blair, who is arguably the greatest strike brander in the world.

James Raimar got this huge and amazing piece while myself and others watched in awe over a live video feed. Myself and several others returned home and immediately started  trying out this new technique ourselves and look where scarification has gone! The techniques have improved and the aftercare has VASTLY improved, but it is important to remember where our art came from and this piece was a big part of the modern history of scarification. 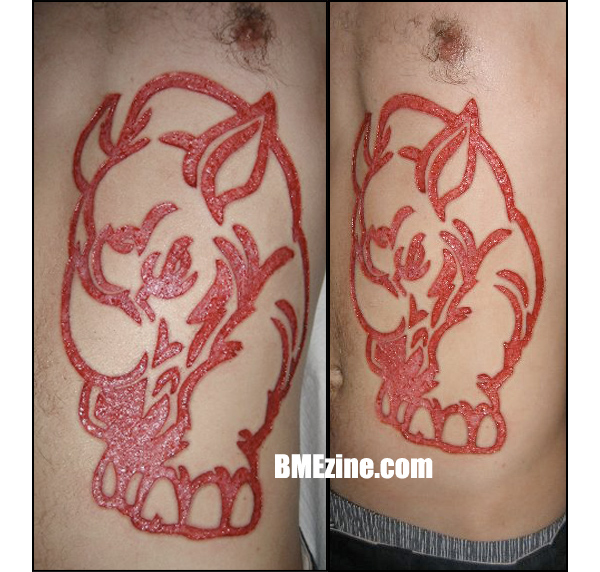 HEY MODBLOGGERS, SORRY FOR THE EXTENDED ABSENCE—SUBSTANTIAL TECHNICAL DIFFICULTIES COMBINED WITH SOME METAPHORICAL CROSSED WIRES GOT US INTO THIS MESS, AND THEN WE HAD SUCH A GOOD TIME READING ALL THE JOKES YOU GUYS WERE CRACKING IN THE COMMENTS THAT WE JUST WANTED TO LET THAT STEW SIMMER A LITTLE LONGER. ANYWAY, IN CELEBRATION OF INTERNATIONAL CAPS LOCK DAY, HERE IS A HANDSOME CUTTING OF A RHINOCEROS—AN ANIMAL FAMOUSLY UNABLE TO PRESS DOWN THE SHIFT KEY WITH ITS MIGHTY STUMPY TOES AND THUS JUST KEEPS CAPS LOCK CRUISING AT ALL TIMES—COURTESY OF OUR OLD FRIEND ANDERS, WHO IS ON MODBLOG SO OFTEN WE COULD PROBABLY ASK HIM TO CHIP IN SOME RENT. BUT WE WON’T. WE WILL SIMPLY SIT BACK AND WAIT FOR HIM TO SUBMIT MORE OF HIS ALMOST SINGULARLY CLEAN AND PRECISE SCARIFICATION WORK, WHICH IS SOMETHING ON WHICH WE CAN COUNT PRETTY REGULARLY, WHICH MAY BE EVEN BETTER THAN A RENT CHECK. 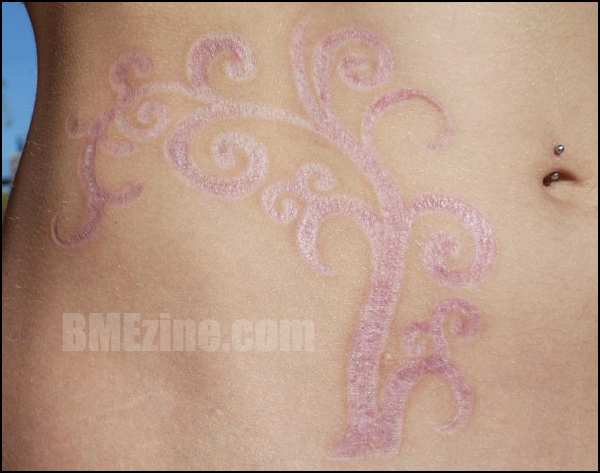 We have resisted every nerdy impulse we possess to make some sort of awful Ernest reference, and instead would just like to share this handsome skin-removal offering by Vern K. out of Stay Gold in Albuquerque, New Mexico, who we last saw working his ear magic with this fancy cartilage project. Now, however, he’s trying his hand at scarification and, while he doesn’t have the most extensive portfolio just yet, we certainly appreciate the design and placement of this piece. We hope, as always, that we’ll be kept in the loop as this heals, but it sure seems like this has the makings of a nice, subtle scar, well suited for its position on the torso, doesn’t it? To be continued, perhaps. 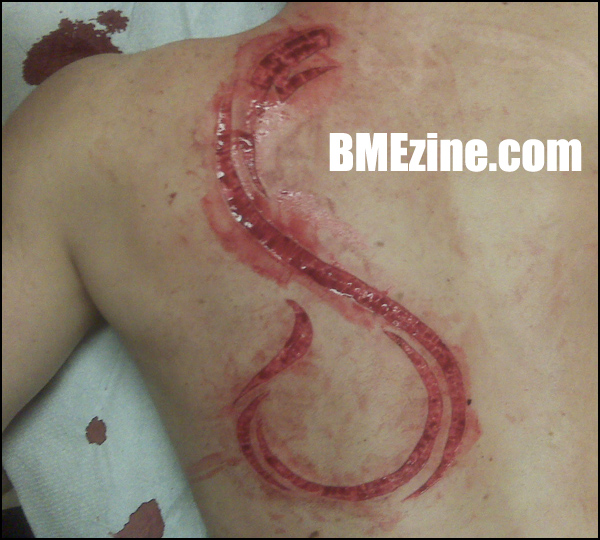 As many of you know, we try our damnedest here on ModBlog to not just feature scarification pieces in all of their stunning freshness, but also, when possible, to show the multiform and often unpredictable ways in which such projects can heal. Up above, we’ve got part of a serpentine skin-removal piece by Rion out of Deep Roots in Seattle, Washington, and this doesn’t quite look like it was scratched in there with a kitten’s claw—that deep middle section in particular looks designed to produce a hearty scar. After the jump, we see this gentleman’s back two months into the healing process, and a hearty scar it is.

END_OF_DOCUMENT_TOKEN_TO_BE_REPLACED

Whoa hey, this beautifully shaped flesh-removal scarification piece comes to us from Jimmy Xayyabanha at Straight A Tattoos in Asheboro, North Carolina. This one’s just about the complete package, folks—something for everyone, from those within the body modification community to font nerds to board game aficionados to your run-of-the-mill scab collectors. The piece seems pretty fresh here and will surely be something of a different beast altogether once it’s healed, but this is nothing if not an exercise in precision and evenness, so we’re looking very forward to seeing how this bad boy turns out.

Hey now, our old pal Anders has checked in from, we don’t know, somewhere amongst the spheres and galaxies, to show us this intense skin-removal piece he performed two months ago. Of course, scars are still apt to change beyond two months into healing, but sweet sassy molassy, this is shaping up beautifully. This is why, if you can help it, you always go to an alien for your various body modification needs, at least when you’re in Broadbeach, Gold Coast, Australia. Close-up shots, after the jump.