You know it’s going to be a good day when it starts out with a wiener post.

Nothing like a cute little cupcake to get you through a long Wednesday at work.

I think I got a cavity just looking at this tattoo by James Pruitt from Alliance Tattoo Lounge in Yuma, AZ.

I’m pretty sure that diamond is actually a ring-pop.

May Thy Perogi dwell always in our bellies!
May Thy Sour Cream ever flow over the dough of our souls!
O fillings of our Perogi, Thou givest flavour to all things by the cheese and potatoes of Thy goodness!
I will not go until Thy Perogi has strengthened me, O Chef!
May the Perogi of The Plate be the King of my belly!
Blessed be Perogi. Amen.

A word of thanks to parishioner Burningbridges for submitting this image of the Sacred Perogi to the tattoo galleries.

Can someone do me a favor?  Please explain to me how cupcakes became so insanely popular in the modded community.

I don’t get it, which probably has to do with me not really ever eating them.  Now don’t get me wrong, it’s not that I dislike them, I just have never really ate anything sweet.  But what I lack in the eating of cupcakes, I more than make up for in the baking of them.  I’m the go-to guy for most of my friends when they need something baked up, which oftentimes is a batch of cupcakes.

Now I know you’re probably expecting an awesome image of a tattooed cupcake, but did you really think I would go for something so obvious?  C’mon, when I put the icing on a post do I ever just slap on some pre-made Betty Crocker crap?

The devil’s food cake is in the details.  At first glance you probably just assumed this was a simple skull and crossbones tattoo.  Well look deep into those eye sockets and you’ll see where the buttercream filling is.

L8ness uploaded this image yesterday and it definitely shows how the little details, like the right color sprinkles, can make a project stand out.

Now I’m sure those who are cupcakely inclined have a few recipes to share.  Or at least someone can explain the popularity, which I’m guessing probably has to do with the taste.  Maybe I should do some kind of ModBlog contest where the winner gets a batch of cupcakes made by me.  Do you think anyone would even enter it?

I’ll admit that I love the Iron Chef.  Both the original, and the US version.  Heck I even watched the specials hosted by William Shatner.  So it should come as no shock that I think this story is pretty cool.

While frat guys have their secret handshakes and makeout parties, the modern-day chef has chosen a little more permanent insignia of their brotherhood: tattoos. This distinguishing feature pops up on plenty of chefs both nationally and locally, bringing a touch of rock-star flare to the back of the house.  Tattoos — whether used as a means to cover up scar tissue from years of kitchen work or a means to pick up chicks – are as much a part of today’s chefs uniform as a toque or an apron.

You can check out the rest of the gallery here.

The last time I was in Kansas City, I had dinner at a fantastic pizza place that had some great vegan pizzas.  I can’t recall the name of it right now, but I’m sure someone in the comments section can enlighten me.  If you do get a chance to hit up this pizza place, I highly recommend getting a pizza with mushrooms, garlic, and roasted potatoes.  I’d drive down there again just to eat that pizza.

Any ModBlog readers chefs?  Or just someone who likes to cook?  Got any tips/recipes to share?

…and using that same reasoning, I should have known better than to search for modblog material on an empty stomach. Because now, thanks to Shannon, all I want is a big juicy hamburger. Oh well, it could be worse, I could have been looking through the subincisions and decided I wanted an overcooked hot dog.

Tattoo by Shannon Walsh of  Phoenix Ink Tattoo in Connecticut.

This tattoo really speaks to me.  I have to say it gave me a little chuckle when I came across it.  I’ve been sewing for just over a year now and it’s one of my favourite things to do.  A sad, little known fact about me, lately I’ve been making myself guacamole every Friday night.  So this tattoo, combining sewing notions and avacados just makes me smile.  I can only assume these two things hold a similar allure for Tea_Leaves, who submitted the photo.  The ink was done by Justin Buduo out of Piercing Emporium in Worcester, Mass. 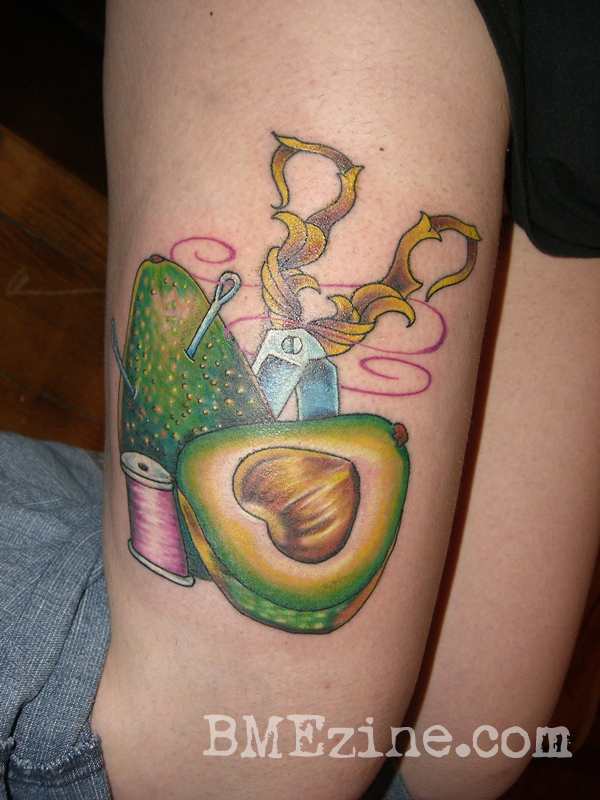 Obscure song reference for a title?  Check.  The following feet were submitted with the subsection “musical reference” checked off but I can’t quite figure it out.  Being the uncool member of BME’s staff, that doesn’t surprise me much.  If anyone knows what it is, please post, I’m curious.  These feet were inked at Big Deluxe in Salt Lake City, by R2.  The submitter tells us, “Caramels & fudge for mom and chocolate & raspberry cake for dad.” 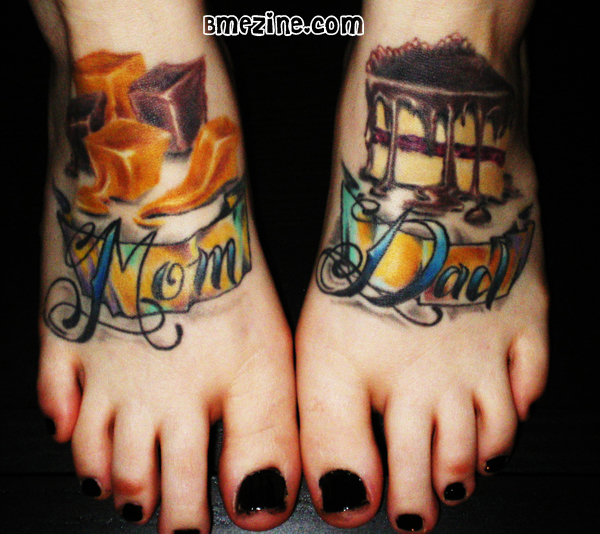 Coming to you from Poland is this delicious diamond filled strawberry.  The calf belongs to Factorygirl and credit for the ink goes to Slawek, in Poznao, Poland. 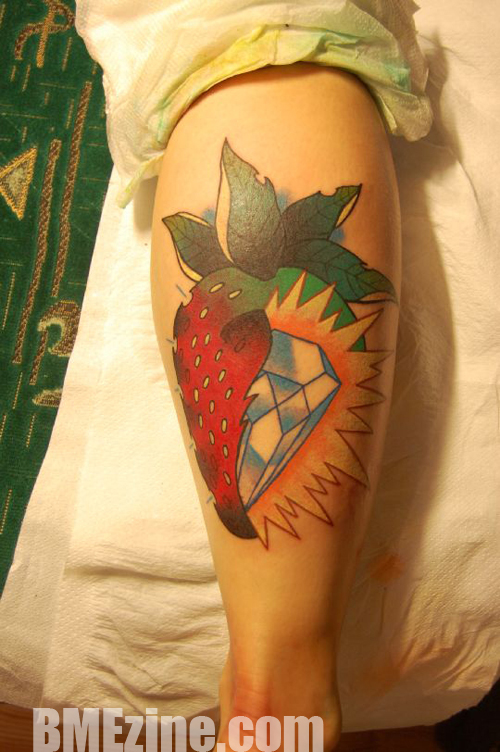