With his vast assortment of modifications, the Mechanical Demon has transformed from a human into something much more.  While I don’t have the list of artists who have worked on him, I do know that Arseniy Andersson is responsible for the ear pointing/reshaping.

It’s amazing how shadows can affect how we perceive a person’s face.  Take a look at these two photos of Roman_hertz.  In the first, the light above his head darkens the lower third of his face and his eyes, giving him a stoic look.  As if he just stepped forward out of the darkness.

Now look at this second photo.  From what I can tell, his facial expression hasn’t changed, but the angle of the light has.  The stoicism from before has now been replaced by a look of longing.  He wants to be in the light, as he has been in the darkness for so long.  He’s also wary, as the light is new, and unfamiliar.

Of course it doesn’t hurt that he’s a good looking fellow, with a great assortment of transdermal and subdermal implants.

Continuing with today’s parade of BMEBoys and Girls, we’ve got Ilja vs. The Baron in a battle to the death.  Two men enter, one man leaves.  Place your bets now, who do you think will emerge triumphant from the bloodbath?

After months of planning and research, a new project is about to get underway that is both a living art exhibit and a journey into the very limits of body modification.  I’ve known about this for a little while, but I had been asked to keep quiet until the time was right.  Well, today is the day.

The artist behind this project has asked to remain anonymous for now, but he/she has been featured on ModBlog several times before.  This project is the culmination of many years of hard work.  That project?  The Arnie Composition.

The focus of the project is to take fictional modification/mutations found in various Arnold Schwarzenegger films and make them a reality.  This is where you come in.  The artist is looking for volunteers to take part in this radical art showcase.  In order to take part you must be 21 or older, and have some experience with surgical modifications (i.e. implants, etc), and be willing to travel to Montreal.

So what modifications are planned?  Well I don’t have the final list, but I can provide some examples.  We recently saw in the news a professor who used transdermal anchors to stick a camera into the back of his head.  The implants eventually had to be removed as the camera weighed too much.  For “The Arnie Composition” the artist is looking for someone who is up to the challenge of becoming The Predator. If you recall, in the film Predator, the alien had a digital device attached to his arm.  For the project the artist has crafted a compact and lightweight version that will attach to the arm via magnetic transdermals.

In addition to the arm plate, he is also looking to use multiple skull transdermal implants to attach dreadlocks similar to the predator’s.

Next up is the Terminator portion of the exhibit.  Using a combination of scarification, branding, and LED implants, the goal is to recreate the iconic look of The Terminator.

Finally, in the most radical modification of the collection, the Total Recall.  Total Recall is famous for a number of things, but probably the most iconic image is that of Mary, the prostitute.  One lucky woman will have the opportunity to be the centerpiece of the exhibit by transforming into Mary.

There are many more procedures planned, including a radical tattoo and scar piece reminiscent of Mr. Freeze.

If you have any questions regarding this exhibit, feel free to get in contact with me as I’ll be passing the requests along to the artist.  In the mean time, take a look through the galleries to see what what the many talented artists that submit their images to BME are capable of, and start watching those Arnie movies to get a better idea of what to expect from The Arnie Composition.

Samppa Von Cyborg isn’t just a pretty face.  He’s also a pioneer in the modification industry and is currently on tour in the US holding seminars, performing shows, and of course taking clients.  Over the course of the week we’ll be taking a look at some of the newest things Samppa has been working on, as well as seeing photos from his tour.  You can also take a look at some of his past works in his BME scarification portfolio gallery.

If you’d like to get work done by Samppa while he is stateside, you can contact him at [email protected].  He’s only going to be here until June.  After that you can make a booking through his website, voncyb.org

In addition BME is happy to announce that we’ve expanded the portfolio sections of the galleries.  Previously only tattoo artists and a handful of other people were able to have their own portfolio galleries, but now these galleries are available to everyone.  So if you’re a piercer, a tattoo artist (or studio), a scarification artist, or a suspension crew, and you don’t have a gallery yet, send an e-mail to [email protected] and we’ll set one up for you.

Just like some other big name guy who shed blood for his followers, I shed blood for the readers of Modblog. People are complaining that Modblog isn’t updating and I wanted to help, but without new submissions to BME there is little for me to choose from. So instead of complaining or making excuses, I took action and used this lull in post as the encouragement I needed to get those godforsaken transdermals removed from my noggin.

First and foremost, I want to be clear I knew the risk going into the initial procedure and I realized the super low success rate of transdermals. Hell, I think the BME Encyclopedia entry on transdermal removal summed it up best.

All in all, because of the low success rate and complications, transdermal implants are one of the few procedures that BME recommends against — although we fully support people’s right to get them, if and only if they fully understand and accept the risks.It should also be noted that a variety of professionals are trying to solve the problems with transdermal implants.

I got my implants done by a highly reputable practitioner, whom I also consider a friend. As far as procedures go, it was as spot on as one could hope for.  In fact, long time modbloggers may even remember this post Shannon made of them when they were brand new.

As is the case with most transdermals, they never actually healed. The wounds around the transdermal post oozed, well, pretty much constantly. The channels the implants were inserted in stayed seperated from the underlying tissue and bubbled up. Hair growth was nullified in a large circle around each of the implants……….and this is just what I dealt with in the first year.

I tried lots of remedies, some holistic, some horrific. I used everything from chamomile tea bag soaks to injecting alcohol around the transdermal stems  to dry out the excess lymph. Nothing had any lasting affects. As the years went on the implants just got worse, most started migrating and the first one (as you can see in the before picture) rejected to the point of one foot coming completely through the skin.

While there has been no definitive study on the long term success rates of transdermal implants,  20% or less seems to be pretty accurate. I’d even go so far to assume that most of those will not last indefinitely and that a lot of the “successful” ones aren’t actually fully and properly healed.

I (speaking purely as myself, and not for BMEzine.com) feel that the  transdermal implants, as we know them, have  no place in modern body modification. The original design by Steve Haworth, was ground breaking and without that original design we may not have the microdermal anchor design that we have now. However, with the gray area legality of the implantation procedure and the unlikeliness of them properly healing, I just don’t see why they are still being commonly offered. Don’t get me wrong, if a practitioner wants to do some on a highly modded well informed client, I am not opposed, I just don’t see the point. However, the fact some practitioners will do these on any walk in client is an atrocity and a total F-You to our entire community.

One thing that I feel will certainly make transdermal implants obsolete is large gauge microdermals, such as those offered by Anatometal. With them offering micros up to an 8 gauge, that can be inserted with piercing techniques (no invasive surgery) and also removed far easier that transdermals, I just can’t see the need for an invasive and potentially illegal surgical procedure with a low success rate.

Anyhow, that’s my take on the subject, feel free to chime in your opinions on this topic in the comments. For a whole lot of photos from my transdermal removal procedure, keep on keeping on.

END_OF_DOCUMENT_TOKEN_TO_BE_REPLACED

Efix can always be counted on for sending in great photos of his work. This one is no exception. If you’ve got the time, I highly suggest going through his portfolio which is linked below. If you’re looking for Efix, he can be found at D-Markation in Quebec City, Quebec. 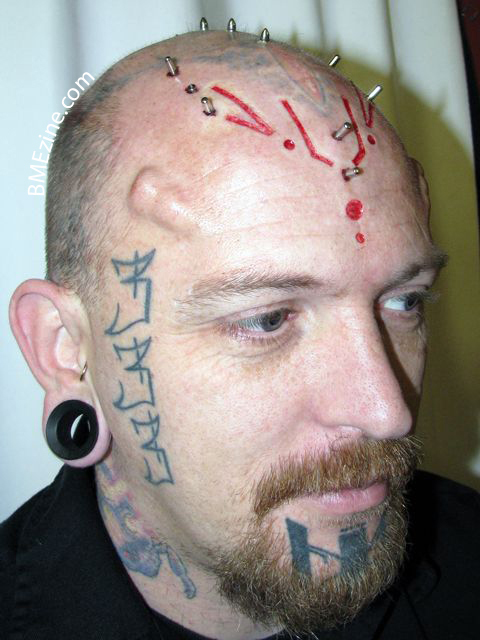 I was adding the category tags for all of the mods on his face and somehow managed to break the tag function. Perhaps I added too many tags?

We do our best to give credit where it’s due whenever possible when we feature folks on ModBlog, but sometimes, if only a little information is included with people’s photo submissions, there’s only so much we can do. This, unfortunately, is one of those times, as the only supplementary information accompanying this series of shots was a mention that they came from Japan. But, hey, when you’ve got a bunch of good looking implants (the eye implant after the jump is pretty intense) like this, you just put it out there and hope someone claims it. Until that day, though, thank you, stranger! As mentioned, more after the jump.

END_OF_DOCUMENT_TOKEN_TO_BE_REPLACED

Good day, ModBloggers! Here we have old friend of BME, Lassi, he of the Mundus Absurdus boys, sporting some shiny new horns (screwed into transdermal implants, natch) and inspecting the integrity of that glass baton he’s got there. And all that glass there, teardrops in his ears included? All custom-made by the illustrious Jason of Gorilla Glass. After the jump, another shot of Lassi, and hey, while you’re at it, take a peek at BMEshop’s Gorilla Glass selection (and anything else, for that matter) and, if you like it, pop in ilovebme as a discount code and you’ll get 15 percent off until tomorrow. Awesome? Awesome.

END_OF_DOCUMENT_TOKEN_TO_BE_REPLACED

Greetings, ModBloggers! Let’s begin our Wednesday smorgasbord with this shot of “Mr. Lees Boat,” if that is his real name, featuring some brand new circular facial scarification work by the great Iestyn (lots more). As always, we’ll be very curious to see how these suckers heal, but between his jewelry and new scars, ’tis a fine theme emerging.

(Cutting by Iestyn at Diamond Jack’s in London, England.)