"When people go to work, they shouldn't have to leave their hearts at home."

In my previous column I talked a bit about how employers can benefit from hiring the modified. Unfortunately, most employers are still too clueless to realize that, and it’s all too common to see people fired (or simply not hired) over body piercings.

Recently I had the opportunity to interview Vickie, a 23-year old single mother who was fired from a major health food chain over her facial piercings. After being fired, even though there were no rules against body piercing when she was hired, she was denied unemployment insurance as they said she’d violated a “reasonable” rule. We caught up with her in Santa Rosa, California.

BME: Tell me a bit about your body modifications.

Vickie: I have several body mods including eleven piercings. My body modifications are one of the most important parts of my life. It’s hard to put into words what they mean to me, but I would not be complete without them. They are so much more than a “fashion statement”. They are a part of me and it is as if they had been there all along. I would never remove them for anyone. 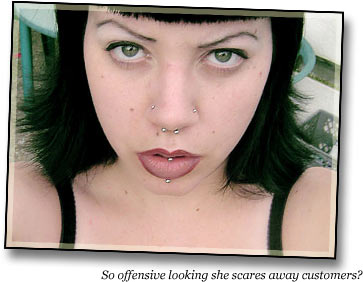 Vickie: When I was hired in the prepared foods department, my labret, tongue, and lobes were all visible.

BME: What gauge were your ears?

Vickie: At the time my lobes were 2 ga.

BME: And the store was fine with it?

Vickie: I had assumed the piercings were fine because I had been interviewed and hired with them in. Three months into working there I was told by my manager that I had to remove my labret because it was against store policy. I of course refused. I reminded the store manager I’d been hired with it and had been working there with it for three months and he agreed to add the labret piercing into the store policy as an “allowable piercing.” So after that everything was fine.

BME: So how did the problem come about?

Vickie: I kept working this job until March 2002 when I had found another one which I took. A few days later I changed my labret to a vertical labret and got double nostril piercings. However, I didn’t like my new job and wanted to come back to the old one. I called my old department manager asked for my old job back, and she of course agreed to re-hire me. I went back with my new piercings, signed the papers, and returned to work. I was given the employee’s guide which I signed certification that I had received — no where in it does it address body piercing.

After two and a half months of working there I was sent to the store manager’s office to get some tape. When I was in the office my store manager asked me how long I’d had these “piercings in my face.” I told him I’d had them for the entire time I’d worked there, and he responded that it was not acceptable for me to have these facial piercings and that I should remove them. I told him that wasn’t fair and I shouldn’t have to remove them, grabbed the tape, and went back down to my department.

BME: Before we continue, let me ask you if you were actually dealing with the public in your job?

Vickie: I was dealing with the public on a daily basis. Customer service was the main aspect of my job.

BME: And did they have any problems with your piercings?

Vickie: Most customers didn’t say anything about my piercings. If they did, it was always something positive. They would say things like “wow, that really looks good on you”, or “I’ve never seen that done before, I really like that.”

Anyway, a few minutes later, the store manager came back down and told me to get in his office now. When I got there he there told me I was trying to take advantage of the company and was going to get him fired. He was screaming at me and I began to cry. I didn’t know how to explain to him how much my mods mean to me. He would never understand.

He then told me if I didn’t remove the jewelry he would have to fire me. I replied, “I guess you’ll have to fire me because you are not being fair and I am not going to remove my piercings.” After that he went out of the office, came back with firing papers, signed them, and told me to get out. So I got my stuff and left.

BME: Were you the only person with piercings at that entire store?

Vickie: There were other people in my department with facial piercings — who might I add are still working there. Two people had nostril piercings, another had a labret, and another had a labret and a nostril piercing. I really don’t know why I was singled out. I don’t know if maybe the store manager was in a bad mood or something. I had never been written up before, so I know it wasn’t because of poor work.

BME: And it’s not as if there was a real “store policy”… The guy just made it up?

Vickie: If there was a store policy I never received anything in writing and it wasn’t in the employee’s guide. Nothing about it was ever posted to my knowledge.

BME: So what did you do?

Vickie: The next week I filed for unemployment, and a few weeks later I got a letter stating that I was denied because I broke a “reasonable” rule concerning dress code. 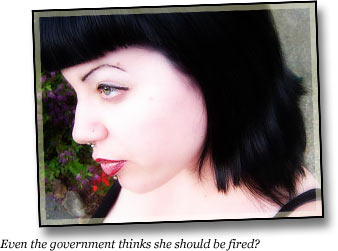 BME: How could they say that?

Vickie: I think they just said that because they didn’t have all the facts. I guess to them having body piercings is breaking dress code, but I don’t believe they had a copy of any store rules when they made that statement. I absolutely flipped out and immediately filed an appeal. They then sent me a letter with a date to appear in court. It took about four months from the date I was fired until the date of the hearing. I almost gave up a few times because of how lengthy the process was but I know I couldn’t let them get away with firing me.

On the court date I appeared before the judge and stated my side of the story. She told me I would receive the verdict in the mail. A few weeks later I got it and this is what it said,

"Had the claimant been informed at the time of hire that the employer would not hire her if she had more than one facial piercing, it is arguable that her decision to obtain such piercings would have breached the contract of employment and violated a reasonable employer rule.

In this case, however, the claimant was hired with these piercings in place and worked for two and one-half months without the team leader's comment, despite the fact that he had multiple opportunities to observe her appearance. Under such circumstances, it is found that even if the store policies did exist at the time the claimant was rehired, the employer has failed in its duty to provided sufficient evidence to establish that this infringement on the claimant's First Amendment right of self-expression is outweighed by the enhancement of the employer's business. It follows that the discharge was for reasons not constituting misconduct, within the meaning of section 1256 of the Unemployment Insurance Code.

The Department determination and ruling under code 1256 are reversed. The claimant qualifies for benefits."

BME: Wow! That’s awesome. Any advice for people in the same situation as you?

Vickie: If anyone finds themselves in a similar situation don’t back down. Stand up for your rights. Go through all the steps to get what you deserve. Nobody has the right to tell you what you can do to your body — it is yours. If you feel as strongly as I do about your mods, don’t give them up for anyone.

And if you’re shopping at a place that claims to be a “diverse company”, realize that in reality it may not be.

BME: Thanks for talking to us, and good luck finding a more tolerant job.

So there you have it! Sometimes the system does work, and perhaps body modification that doesn’t damage one’s work performance actually is protected. It may not seem like much, but this judge’s ruling could be an important small step towards fair treatment of modified individuals.

Good luck, and keep standing up for yourself,