Piercing a pet fish. It sounds sick, doesn’t it? Some kind of animal abuse?

Maybe it is, but as humans we have always modified our pets with everything from identification tattoos and brands, to cosmetic surgery such as ear cropping, tail docking, and toe amputation (ie. the honest name for “declawing”). Many modern animal enthusiasts decry the traditions as barbaric, while advocates insist it allows them to maintain a closer bond with their pet and thus the pet lives a longer and happier life.

In addition, we pierce the ears of cattle (fly and identification tags), and we implant pets with chips to track them should they become lost. We accept that anglers may sport fish, and as a result give lost and returned fish permanent lip piercings on a regular basis — to say nothing of our mass imprisonment and killing of animals in the food industry. Short of the most radical of vegans, we’re all in a massive glass house when it comes to our treatment of animals — almost all of us have done far worse to animals than piercing them. 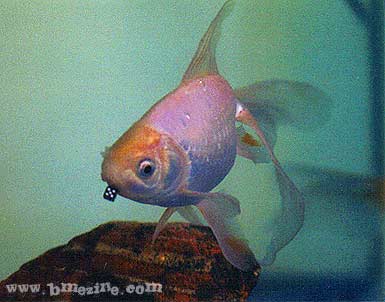 But still, is piercing a fish acceptable? It may be hypocrisy to object, but that’s far from a justification after all. BME recently had the opportunity to talk to a piercer in Arizona on this subject after he sent us pictures of the fish above wearing a labret.

BME: What gave you the idea to pierce a fish in the first place?

WILLIAM: I was bored, and the fish was at the shop. It all started out as a joke, but it looked cool and it never affected him adversely. So I just left it in.

BME: How did you decide that it was morally “ok”?

WILLIAM: First off, goldfish have a thirty-second memory. Secondly, how many fish are out there with lures attached to them with treble hooks? At least this fish had some jewelry!

BME: How did you decide on the specific piercing and design the procedure itself?

WILLIAM: The labret was the only thing that wouldn’t disrupt the fish’s life. Piercing the fins was out of the question. The jewelry is a 3/16 Labret from Good Art — nothing but the best internally threaded jewelry for my fish!

BME: What was the procedure?

WILLIAM: It was a freehand piercing. My apprentice held the fish, and I pierced him. The labret stud has an acrylic end for less weight. We took him out of the water to do it, and once done we put him back in the tank.

BME: How did the fish respond to the piercing? Did it affect swimming, feeding, or anything?

WILLIAM: The fish seemed completely unaffected. He ate right after, and it did not weigh him down or affect his ballast.

WILLIAM: Not sure how to answer this one… he never “complained”.

BME: Did the fish lead out a normal life?

WILLIAM: Yeah, he lived for quite some time afterward [ed. note: as in years, not days]. I moved, and the water temperature in the tank changed by ten degrees — that’s how he died… sob… sniffle sniffle.

BME: You’ve pierced other fish as well — same story on them?

WILLIAM: No, on the first one I used a CBR and it weighed him down. I took it out because I felt bad for him. Cornelius was the second, and the third was a fish at a restaurant/bar that has a pond. He was fish-napped!

BME: This fish was on display in your studio — how did customers react? Did you ever get threatened by the SPCA or anything?

WILLIAM: Customers loved it — they even brought their parents in. There was another studio in town that had fish in their name so I brought them pictures. The owner wasn’t amused but the piercer thought it was hilarious. A few hippies gave me some flack, but once the whole “lure” argument was brought up they saw how it wasn’t really any worse.

BME: Do you have pets in general?

WILLIAM: Not at present, but I am an animal lover. I’ve had dogs, iguanas, snakes, rabbits, rats, hedgehogs, prairie dogs, hamsters and yes, fish.

BME: Would you pierce animals other than a fish, like a dog, or is it “just fish”?

WILLIAM: Maybe an Abyssinian [ed. note: a kind of cat], but nothing else.

BME: What would you say to people who say you’re abusing animals?

WILLIAM: That maybe they should look at all the other psychos out there. My fish led a normal life.

BME: If someone brought their fish to you for a piercing, would you do it and what would you charge?

WILLIAM: Yes, as long as it was a fish of substantial size. People have asked me to pierce Betas and there’s no way I would. I don’t think I could charge for the service, just the jewelry.

WILLIAM: Well, I pierced a baby’s lobes once and I’ll never do it again! I’ll pierce fish again though.

BME: Do you have a special name for the piercing? Or is “labret” the right word?

WILLIAM: No, labret is what I always called it.

BME: Thanks for talking to us about this.

So there you have it — draw your own conclusions as to the moral implications, but if you decry it, I hope you’ll consider thinking about your other interactions with non-human life on this planet as well.

But let me strongly emphasize that I’ve published this interview for informational purposes only! I am absolutely not advocating the piercing of animals, and while William’s procedures on fish appear to have been a success that caused no apparent harm to Cornelius, attempting the same act on cats, dogs, and other animals is far more likely to result in them gnawing or scratching the piercing out, and injuring themselves in the process. If you care about your animals, please, very seriously consider how something like this will affect them.

If your dog wanted a piercing, I’m sure he’d ask you for one.

All life is sacred,