Piercing is a healthy and positive thing in most people’s lives that encourages personal growth and self-discovery. Sadly, many parents as well as the modern school system, sometimes aided by local law enforcement, have difficulty understanding this and make the terrible mistake of acting to restrict rather than encourage safe body modification among young people. In short, parents and schools that care about their children and pupils should learn how to safely encourage them to explore body modification in order to ensure happy, safe, and productive young people who go on to lead successful lives. 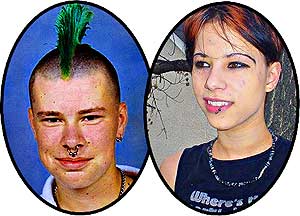 To cite a typical example of the type of interaction with authority that pierced youth have all too often, earlier this month Megan Sims-Fujita was kicked out of school for her eyebrow ring (which she had worn since the previous school year) when the school began enforcing a new dress code. Megan is a National Honor Society member and a volleyball player. How was her life or the quality of the school’s education process served by such an action? Stories like this are common. In Cordele, GA (“The City of Progress”), a 14 year old boy was expelled after his mother took him to get an ear piercing. Samantha Griffiths in Swaffham Hammond High School (UK) was kicked out for having just a small gold stud in her nostril. I can list these endlessly, and in most of these cases the youths were acting with the full permission of their parents.

The point is, piercing is a non-issue. Assuming studios are adequately regulated, piercing is incredibly safe — far safer than organized sports, driving a car, or all the other things we agree are within acceptable levels of risk for teens. The long term problems are minimal, and suggestions that piercings are indicators of “rebellious behavior” are ignorant at best and libelous at worst. As far as the various youth activities seen as rebellion by conservative older generations, body piercing is the safest and most positive one a youth could embrace, given the alternatives of drugs, sex, and gang violence.

People outside of body piercing need to realize that body piercing is first and foremost a form of communication. Sometimes this communication is with the outside world (a statement of who the person feels they are, a way of exploring interactions with others, an iconographic way of searching for other like-minded individuals, and so on), and sometimes it is about self-communication (learning how the body works and feels, understanding healing, overcoming pain as a symbol for other personal challenges, and so on). Piercing in and of itself does not usually have a meaning any more than letters have meaning in and of themselves — they are simply a tool that a person can use to express themselves and interact with the universe. 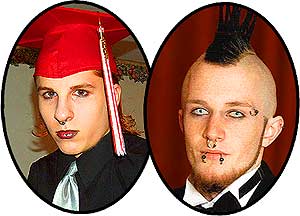 When we feel that someone’s right to express themselves has been taken too far and is hurting others (be it racist hatespeech, or be it simply “shouting fire in a crowded theatre”), we don’t ban speech or writing — we go after that specific application of speech or writing. In the case of body piercing, banning an activity which is safe and positive for the vast majority of those involved simply sends the message that parents and educators are hypocritical and fundamentally more ignorant to the world than youth is (in this case). It reveals parents and educators as liars and oppressors when they try to suppress communication and personal growth. Most importantly, by cutting off an essential line of communication they guarantee that there will be no way to discuss the issue, encouraging the youths to seek out (typically more dangerous) activities that they can hide from authorities. And, if there actually are underlying personal problems causing the piercings, then you can bet that banning the piercings will dramatically escalate those problems as they are expressed in other ways.

In the case of body piercing in troubled youth (problems adjusting, teasing and social abuse, low self-esteem, difficulty with schoolwork, and so on), body piercing is often extremely important in providing a safe and controllable foundation for their lives. It is often a way of both letting off steam and setting and beating a personal challenge (especially in the case of peripheral activities such as play piercing). Additionally, it can be a way of defining a personal space and set of ideals that are self-determined and entirely “their’s” — which is acutely empowering. This personal empowerment is exactly what youth (and adults) need to succeed in life.

So in the case of troubled youth, taking away their right to body piercings can have a deeply scarring effect and make it much harder for them to bt successful. 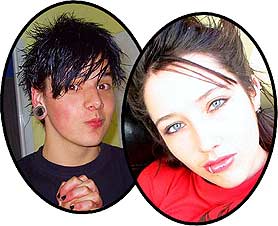 In the case of body piercing in bright and successful youth (good students, athletes, community leaders, and so on), body piercing also has a very positive role. It can help them to define a personal identity that isn’t locked to legislated boundaries. It can help them explore their own personal boundaries, and by doing so, decide where they want to go in life. They can learn about how the world interacts with people based on different ideals, and learn how they respond to those changes and challenges as well. They learn to define their life on their own terms, and by doing so, prepare themselves for a life where they are leaders and innovators. Body piercing is sometimes also a way of testing social limits and testing the character of others by gauging their responses.

So in the case of bright youth, taking away their right to body piercings is little more than an unwitting attempt to keep personal success out of the hands of those who don’t conform as directed from above — an act which may well be met by genuine rebellion!

In conclusion, attempts by parents and schools to eradicate body piercing are ultimately destructive to the youth they are hoping to protect with such edicts — to be very clear, these bans hurt rather than help those they are oppressing. It is extremely important that outsiders start to recognize that body piercing is not a negative thing, and that in the few cases where it appears to be, it is actually a communications conduit that helps diagnose and heal that problem. Body piercing is communication, it is medicine, it is art. Banning body piercing makes no more sense than banning young people’s right to talk or to pray.