“We mostly operate as Absent Bodies. That’s because a body is designed to interface with its environment — its sensors are open-to-the-world (compared to its inadequate internal surveillance system). The body’s mobility and navigation in the world require this outward orientation. Its absence is augmented by the fact that the body functions habitually and automatically. Awareness is often that which occurs when the body malfunctions.”

Australian performance artist Stelarc has been doing public suspensions since the 1970s. He is literally the first face many people who are now “elders” in the suspension movement came in contact with, although his use of suspension is very different than the standard we seem to have settled on more recently.

In 1987, two years before RE/search released Modern Primitives, Adam Parfrey’s Apocalypse Culture hit the shelves. My father bought me a copy, highlighted the opening quote — “There is nothing more terrifying than stupidity – Werner Herzog” — and that now beat up copy still rests on my bookshelf. Amid articles on eugenics, nuclear war, modern fascist movments, schizophrenia, and child molestation, was an interview with Fakir Musafar somewhat derisively discussing Stelarc.

While they’d later find a common ground for discussion, at the time Fakir was none-too-kind, writing,

“He has a tremendous amount of guts, but I think his civilization varnish has not been scrubbed enough. He is capable of enduring things longer than he does. If he hung for a longer length of time, he’d have a mystical experience. I can’t help to think that he may have had one or been on the border and it scared the hell out of him. So he limits the length and calls it art. What he’s dabbling in is magic technology.”

But it was enough to get a generation desperate to find literature on something that was calling to them seeking out Stelarc. A few years earlier (1984) Stelarc had released Obsolete Body: Suspensions, a book of writing and photos on flesh hook suspension, using the body as a sculptural installation in various art spaces (and public spaces as well). As much as Fakir expressed dismay at Stelarc’s refusal to embrace the spiritual application of suspension, Stelarc had become — without even knowing it at the time — one of the modern suspension movement’s godfathers. Back then, only he and Fakir were out there doing it publicly and sharing their experiences. 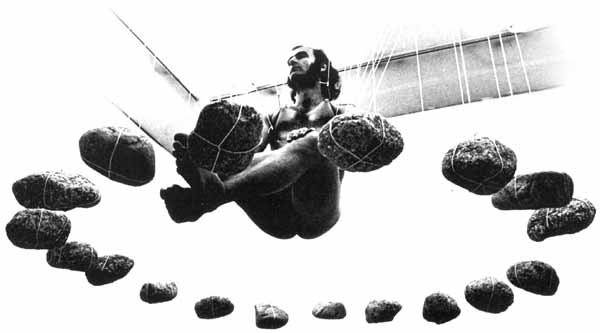 “The insertions were done with the body laying on the floor, below a halo of rocks which had been suspended from eye-bolts in the ceiling with slip-knots. When everything was connected the cords were tugged, releasing the rocks. As the rocks came down, the body went up. The body started to gently sway from side to side, triggering random oscillations of the ring of rocks. Everything was in motion, balanced and buoyant. Everything was connected and and contained. Thoughts of obsolescence flickering in and out of the silence. The telephone rings. Murmurs. Distractions. Sitting, suspended and anxious.” 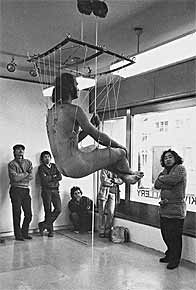 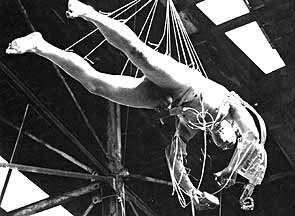 I finally had a chance to meet with Stelarc in person at TransVision 2004 in Toronto (click here for part one of our TransVision coverage) where he was giving a presentation on his work. Stelarc is friendly and approachable, and most of all down to earth with an easy boisterous laugh. At his talk he covered everything from his early suspension work (which ended in 1988, a decade before the suspension mainstream would boom) and “third hand” experiments (a fully functional third hand, controlled by nerves in other parts of his body).

“Whilst the body activates its extra manipulator, the real left arm is remote-controlled and jerked into action by two muscle stimulators. Electrodes positioned on the flexor muscles and biceps curl the fingers inwards, bend the wrist and thrust the arm upwards. The triggerings of the arm motions pace the performance and the stimulator signals are used as sound sources, as is the motor sound of the Third Hand mechanism itself.”

Stelarc also discussed his exoskeletons and robot appendages, and his work with electric muscle stimulation, including pulling “volunteers” out of the audience, wiring them to his control box, and forcing them to dance — any attempt to resist his commands were met with pain, increased voltage, and eventually failure as they involuntarily moved exactly as he choreographed. In previous performances Stelarc has wired himself with these devices and been controlled by both audiences and other factors like Internet ping times.

“During the Ping Body performances, what is being considered is a body moving not to the promptings of another body in another place, but rather to Internet activity itself — the body’s proprioception and musculature stimulated not by its internal nervous system but by the external ebb and flow of data. Ping values from 0-2000 milliseconds (indicative of both distance and density levels of Internet activity) are used to activate a multiple muscle stimulator directing 0-60 volts to the body. Thus ping values that indicate spatial and time parameters of the Internet choreograph and compose the performances. A graphical interface of limb motions simulates and initiates the physical body’s movements. This, in turn, generates sounds mapped to proximity, positioning and bending of the arms and legs.”

Stelarc also showed some of the work he’s been doing on his “third ear” project, in which a replica of his own ear will be implanted into another part of his body — instead of listening though, this ear may talk instead. Helped by Oron Catts and Ionat Zurr of Tissue Culture & Art, Stelarc has been “growing” these replica ears inside biotumblers as his own cells permeate a polymer latice. Finally, Stelarc also showed his avatar projects (an Alice-based communication system coupled with a very creepy animation of his head), allowing computers to speak on his behalf as him.

After TransVision, Stelarc and I were able to sit down for an interview to talk both about his suspension work and his other art. I’d like to present that video now. It’s 45 minutes long so the file sizes are quite large. Please save it to your computer, rather than trying to view it in your browser!

That’s actually the first real video I’ve edited using Avid, so I apologize for any errors. While you’re waiting for it to download, I’d like to strongly urge you to go and browse Stelarc’s website at www.stelarc.va.com.au, as the interview assumes a basic knowledge of his work. Not only is Stelarc one of the seeds of the suspension movement, but he’s also an important seed in cyborg culture, distributed intelligence, technoethics, and other fields he likely never knew he was even performing for.

Thanks to Stelarc of course, and to Philip Barbosa for videotaping the interview and presentation, and thanks to Bo De Duyen for allowing us to film there. Thank you as well to everyone from BetterHumans and the WTA for inviting us in the first place.