“Trust not him that hath once broken faith; he who betrayed thee once, will betray thee again.”

In this column I’d like to give you a behind-the-scenes look at some of the things body modification artists and studios have to deal with that clients may not be aware of, and that younger artists may still need a warning about. It’s very easy for us to get a false impression of the world because of the crowds of mod-friendly people who characterize BME members, but the world in general is far from so accepting a place. You all know about how this restricts our lifestyles on a surface level, but what you may not be aware of is that these sometimes prejudicial laws are also a tool for profit and business manipulation.

There are a lot of people who’d like to see the body modification industry go away or at least be under heavy regulation. Some feel this way for moralistic reasons, and others, such as those in government health agencies, are simply trying to do what they believe is in the best interests of public safety. Then there are those in competition, such as ear piercing gun manufacturers (or even just competing studios), who want piercing to be popular, but are motivated to keep financial traffic away from certain studios so they can drive as much of it as possible to their own establishments. What the industry needs to understand is that these people aren’t going to fight you by firebombing your shop — they’re going to play the system into shutting you down. 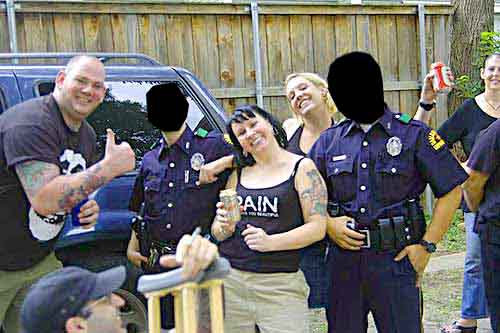 In order to play the system against you, they (whoever “they” may be) need to find a place that you come into conflict with the law. Most obviously this can involve finding (or sometimes fabricating) procedures that may not be entirely legal; tongue splitting, scarification, suspension, or other health code or criminal violation. If the assault is from outside the industry the outsiders tend to be easy to recognize at least.

Hate to bug you but this has come to my attention over the last couple of weeks through **** ***** and ***** at ***** **** Tattoos. Over the last week there have been a large number of people calling us and other shops saying they are looking to have their tongues split. What is odd is these are not heavily modded people, or even slightly "in the know" of the industry. As we all know, if you really want this done, you probably have a general idea of who to contact and/or you are at least well acquainted with your piercer because you probably would have some other work. These are so called "normal" people with no mods and they are all doing it by phone call only. We have had even one request come from an underage kid whose parent's had allegedly agreed to sign for him to have this done. These requests are flooding into our shop, through call-ins, other shops like ****, and ***** **** Tattoos, which causes me to believe that a possible investigation is happening in Ontario right now for body art practitioners that "cross the line."

We of course deny any and all knowledge/involvement and urge others to do the same. Just a heads up.

In “the old days,” those doing procedures that were gray or overtly illegal operated by word of mouth, accepted new clients only when they were referred by an existing client, and certainly never advertised or talked to reporters — even photos sent to private insider publications like BME or BCQ were sent through anonymous email accounts with no names attached. When it comes to procedures like tongue splitting, practitioners should consider the wisdom of their predecessors’ discretion.

Sometimes though it’s not so easy to identify one’s enemy. Since piercing is a business, and there are now people who make their living at it, sometimes those people get carried away with fighting their competition. I’m reminded of a well known Chicago piercer, ***** ***** who conspired with the Health Board to have his competition shut down, which eventually lead to the death of a number of America’s first studios. By managing to convince the Health Board that he was their lone ally, even though he was piercing out of a tiny single room studio in the back of a clothing shop without even a separate sterilization room, he was able to dramatically increase his income and reputation — but at what cost?

Later the Health Board in the same region put a ban on suspension performances. Seeing another opportunity, this piercer attempted to “rat” on any competing shop who he felt was involved in BME BBQs or other events that might legally cross the line. It boggles my mind that someone who did “legally questionable” procedures themselves as well as suspensions would choose attempting to initiate prosecution of others for those activities as their line of attack, but ***** ***** is far from the only piercer I’ve seen try and convince the government to go after his competition, the whole time professing to be doing “the right thing”.

Others, like Canada’s **** *****, genuinely believe that instituting a conservative piercing industry is the right decision. One part civic duty, and one part — and much larger part — shameless self promotion, ***** keeps himself in the public eye with body piercing world record attempts and rabid promotion of body modification safety. An apparent career nomad, as he moves into a new region, piercing shops in the area start to feel heat due to his actions.

I work at a shop here in ***** called ********. The owner, **** *******, has been trying to get a proper body art bylaw instated here for approximately seven years. As of about a month ago, '****', or ***** ****** as I know him mostly, popped up and started trying to get the bylaw proposal thrown out with all sorts of ludicrous allegations. He wants to make scarification type mods illegal, and has been a thorn in our side since the first day we met him. We don't want to make anything illegal, and that is not what **** has been working for, for so long. We simply want to have, at the least, a minimum standard, and people checking up on the industry to make sure things are being done properly. '****' is a media hound, and will do anything, or say anything, to get himself some attention. He even went so far as to generate fictitious death threats, allegedly from our shop, in a hope that the police that showed up today would arrest my boss, so that he couldn't speak, in support, at the final council meeting tomorrow.

I enjoy being able to submit photos of my mods, but with him on the site, I think that I will have to be more selective about what BME gets to see.

Later this same piercer decided that BME was a part of the problem, and began “harvesting” the site for any photos or stories that he felt could do damage to competing businesses. He even went so far as to phone in fake complaints to the police when BME events were being held in an effort to make life unpleasant for the members of the site in return for them not helping him shut down his competition.

Police, called to investigate a suspension party, instead reveal their sense of humor. (photo: CJ)

While regulatory and internal attacks are the most common, as I mentioned earlier, the ear piercing gun industry is another source of grief. The gun lobby has already managed to silence through threat of lawsuit many of the people who spoke out against them, but now that government health agencies are starting to regulate in response to the dangers of piercing guns, manufacturers are beginning to target piercing studios themselves. I believe this is in an effort to convince the government that studios are “even worse” than piercing guns.

I just wanted to give you a "head's up" about the "Ear Piercing Manufacturers *** ** **** ******" 's president - **** *****. You may have already heard of this jewelry salesmen / lawyer. He has harassed the APP and several other organizations related to personal services. He individually approaches health units and tries to convince them that the Ministry of Health has allowed ear piercing guns to be used on cartilage, etc. (assorted lies). He has a big surprise coming when the revised PSSP comes out.

Anyway, I just received a package from his office in **** with pictures from your site (Sprocket in Stratford, etc.) where he is actually looking for health violations and reporting them to me (piercing without gloves, etc.). I am sure that he has already forwarded his information to the Health Unit in Perth. He has managed to get himself into meetings at the Ministry of Health in Toronto, and was actually *** ** *** ****** **** **** ***** *** ******** Health Canada's version of the PSSP.

Have a great day,

The point of all this is that there are always people who can profit from your loss, so there will always be people who will use any dirty trick they can to try and cause you to lose. Above are only a very small number of the attacks I hear about weekly. Most of them come from those who seek financial gain, and others come from moralists and theocrats, but whatever the source, the preparations and defenses required are the same.

These things should be common sense. Laws are in flux, and it’s not always clear what’s permitted and what’s not, and where the lines are going to be drawn, and even with clearly defined laws, they can still be used as a tool to negatively affect the lives of others. While I certainly encourage people to share their experiences on BME, I also urge people to be prudent in selecting which ones should be shared anonymously. Remember that as much as you have friends watching you, you also have enemies watching you.