I’ve been talking to an old friend that’s a tattoo artist who’s pretty straight-shooting and no-bullshit in his attitudes about some of the trends we see among top artists these days. The one that I whole-heartedly agree with is this tendency to fill portfolios with pieces that couldn’t possibly heal well, but look great fresh. Tattoos that look incredible the day they’re done — bright color realism with almost no black-shading is a good example of stuff that often turns into a faded out nothing in time — but looks like garbage when it’s healed. I’ll quote some of what he said, keeping things anonymous because I’m not looking to point fingers here.

There is a very ugly tendancy today in tattoo business of taking pictures of fresh tattoos, doing realism that will look like shit in twenty years — or in four months even — and going from convention to convention, making 100% black money, with no touch-ups, no follow-up of clientele. Those are the most famous artists in the world. I have no problem doing tribal [edit: he is referring to an image I posted of a "less than inspired" tattoo that I spoke ill of] for people who ask. If I can’t change their mind, I’ll do it. It allows me to keep cool pricing for everybody, to keep tattoo art something it SHOULD remain, that is, a POPULAR art form.

You can build up a realistic tattoo that is stable — P*** A*** and J*** G*** can do it, so it’s possible, but when you see older tattoos from D*** or S*** [edit: he's naming top artists here and I don't need another lawsuit], it’s nowhere that impressive. As a matter of fact, the “convention” tattoo artists don’t give a fuck, at least, a solid majority of them don’t. When you work mostly in your shop, you see people again, and therefore you can’t afford to mess up that bad. I would even say that *** *** Inks, as a whole concept, are just done for that — put in a single-pass easy color that will look cool till you’re paid, took your photo, and took part in the “Best of Day” competition… but it’s just the worst shit I’ve ever used. It’s a whole culture that is taking over, and it’s a shame, because everybody feels forced to adapt to it.

I agree whole-heartedly. Although I can’t say whether “convention artists” doing these pieces that fail once they heal are willfully committing fraud when they fill their portfolio with fresh pieces that look nothing like the healed examples, but that is what it amounts to, intended or not. I want to show the example that my friend shared with me. This is a fresh tattoo on the left from a well-respected artist, and on the right, the same tattoo not long afterwards. And to be honest, this example isn’t even that bad. I’ve seen loads of tattoos that fresh look world-class — I mean, the most amazing thing you’ve ever seen — from “name brand” tattoo masters, that look like scratcher garbage when healed.

If a tattoo artist’s portfolio contains nothing but fresh photos, consider it a warning sign — to say nothing of being paranoid about Photoshopping to pump up saturation and levels. And if your tattoo artist can not show you well-healed examples of their work, they are not someone you should be going to. You do not have the luxury of wearing a photograph of the fresh tattoo. You will be spending your life with the healed version, and if it doesn’t stand up to what you were expecting, it is you that will suffer. Insist on seeing healed photos!

Click to see that picture a little larger of course.

Edit/Update: Because I am sick and tired of people STILL claiming this is deception on my part, here are screencaps from Facebook showing both images in the tattoo artist’s gallery, full unedited versions, including the name of the artist. They may well have pulled the images by now, but these screen caps are accurate. Damn all the haters for dragging the artist’s name into this, because that was never the point of this. 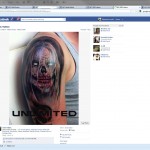 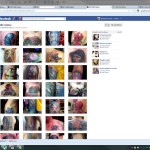 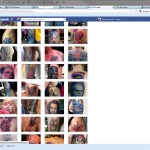 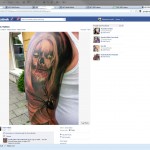 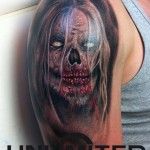 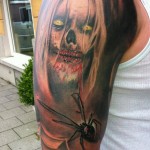 65 thoughts on “Fraud in Tattooing”