Yesterday I mused a little about ideas about new kinds of ear anatomy that could be created due to the “durability” of the tissue… Over and over we’ve seen earlobes get cut up into the most abusive and mangled jigsaw puzzles and then stitched back together, healing up quickly and without complication, showing just how resilient the tissue.

I was happy to be reminded that Nic Theo, based in Cape Town, South Africa, not only had the same idea, but acted on it ten years ago. With the help of his doctor, the disconnected loop of his earlobe was relocated down his neck. An easy procedure all things considered, a couple small cuts were made on his neck at the new attachment site and the lobe was stitched in place, “and bob’s your uncle”. Here are some healed pictures of it, and it’s still doing just fine a decade later.

Edit/Update: Nic wanted me to add that the only issue that he has with this is that it feels quite fragile to him. While the ear is solidly attached to the neck, it’s not robust enough to handle stretching. I suspect this is something that could be addressed with refinements in the way the attachment is created, for starters, making it as large as possible by perhaps cutting the “earworm” at an angle, rather than perpendicular. We shall hopefully see, as others explore the technique.

Here are some fresh post-procedure photos of it, right after it was stitched in place. Click to zoom in to most of these photos for a better look of course. 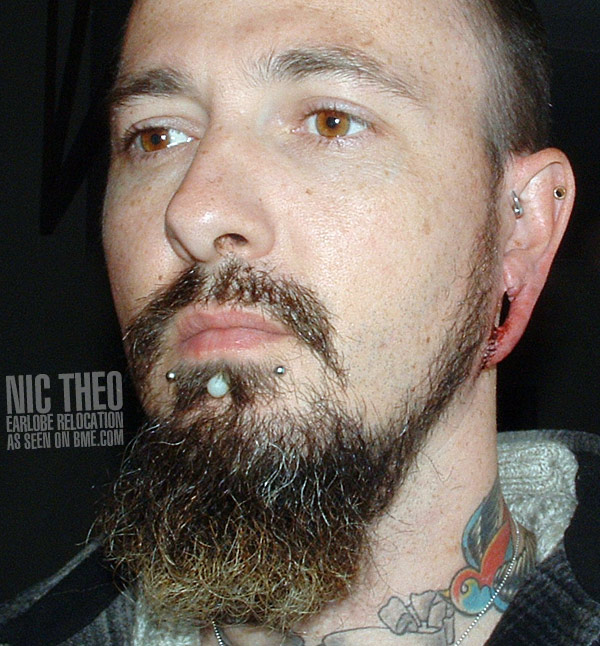 Nic’s version is quite subtle on some levels because his earlobes weren’t dramatically stretched — it’s one of those fun body modifications that is over-the-top radical on one hand, but subtle enough that many people might not even notice on the other. But imagine what could be done with a person that has three inch lobes — the inch lobes give you an almost ten inch long fleshworm to play with! I really think this class of procedure has the potential to open all sorts of new realms of creative morphological expression, and while I always have some concern when piercers start blurring the legal “practicing medicine without a license” definitions, I do think that this is well within the ability of any piercer that’s capable of successfully doing procedures like earlobe reconstructions.

And finally, let me wrap up with a few more recent pictures of Nic Theo — as you can see, the more time that’s passed, the more natural the lobe looks (in the first pictures in this entry I think the “seam” between the lobe and the neck is more obvious because of its freshness). 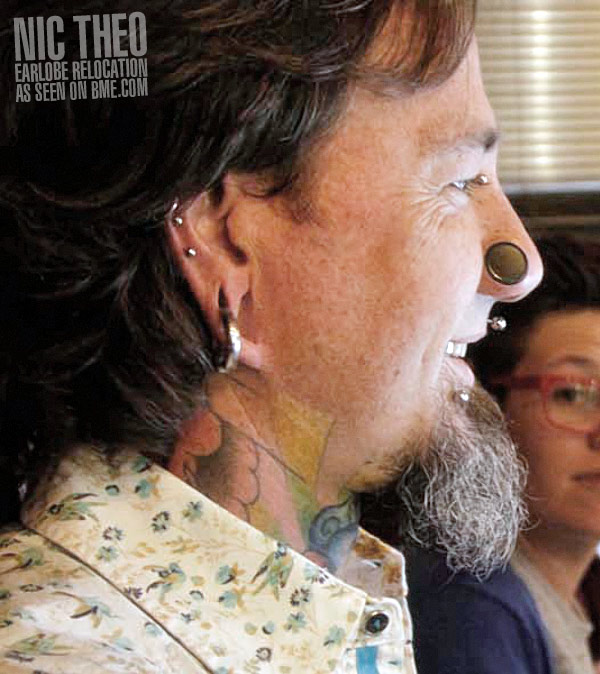 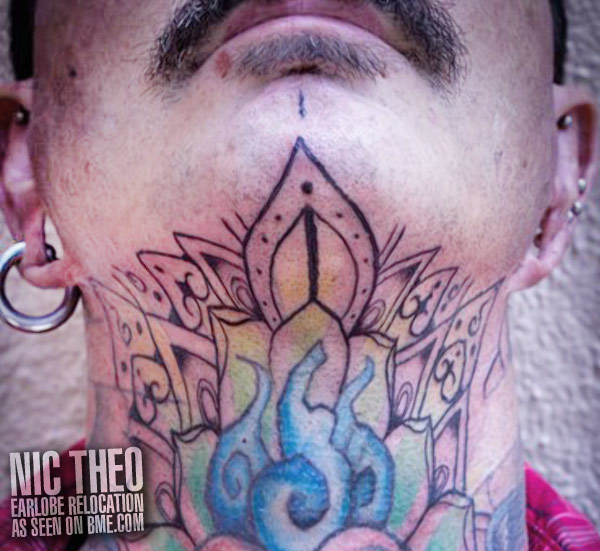 P.S. The other “new idea” procedure that I recently posted, a method for creating new nipples, was also from South Africa… Keep ‘em coming!