There’s debate-inviting interview up on the 2KBT clothing blog that I have quite mixed feelings about — an interview with a 15-year old covered in tattoos. Tattoos that unlike those you’ll find on most 15 year olds, are at least slightly above scratcher level, although still far from the quality level I’d wish on anyone — I was going to ask how he affords this level of tattooing, but I doubt they were costly. I admit I started getting tattooed about that same age, but it’s hard to compare the experience directly since in the 80s it was a different world, one that began with me and a hand-poked needle and was followed by being tattooed out of his apartment by an artistically-minded friend who’d just gotten out of jail and ordered himself a Huck Spaulding kit. As you can imagine, those tattoos have almost all been covered up. Even if I had access to better quality tattooists, I’m not sure that at fifteen I had enough perspective on my life to choose tattoos that I’d be happy with today. Very few of us have the same tastes at fifteen as at thirty or forty. Of course, I wasn’t a whole lot more mature at 18 or 21 either… I don’t think it was until I was maybe 23 that I personally had the maturity to choose appropriate tattoos for myself and my life — which is part of the reason I waited until I was thirty to do my face tattoo. For some people that age is higher and for others it’s lower… But I doubt for many people it’s as low as 15.

Still, I dislike ageism as much as I dislike all forms of prejudice — I don’t like the idea of strangers in some government office telling me or anyone how old they have to be to be able to manage their life. That kind of misguided protectionism has often resulted in kids who are handed responsibility at 18 and rush into it, just as incapable of handling it as they would have been at 15, but with a whole lot more self-righteousness. Well, as I’ve said elsewhere, people get the tattoos they deserve. All we can do is continue publishing information on what good tattoos should look like and how to find a good artist — that information is widely available and any kid with basic internet access and a modicum of self-respect is perfectly capable of doing the research these days… All that said, if I was a tattoo artist, I don’t think I would be ethically comfortable tattooing someone at fifteen that I didn’t know extremely, extremely well. A sleeve to the wrist is starting to cut off some options in life — I wonder what would happen if the kid decided he wanted his face or his neck tattooed? It’s not a big step in today’s world for a kid to think that might be a cool thing to do. Even without worrying about tattoo-bigotry, it’s a very big load to put on someone — if their tastes change, a sleeve and a chest is a lot to steal from them.

I don’t think there’s any easy or definitive answer here — I don’t think there’s a universal age where someone is mature enough for tattoos, and personally, the less the government sticks its nose into body modification the better. Responsible artists, a community that strives to educate newcomers, and a general culture of self-respect seems like the right way to tackle this issue.

The tattoos by the way were done by Mike Casale, I believe of Unity Tattoo in Wilkes-Barre, Pennsylvania. I have no idea what their local laws are or if this interview will come back to bite them in the ass — they seem to be part of that grimey lower-echelon of tattoo shops that prey on less discerning customers, at best a stepping stone for learning artists, but unlikely a home to artists whose work is likely to get much press beyond this sort of shocked “can you believe this crap” coverage… 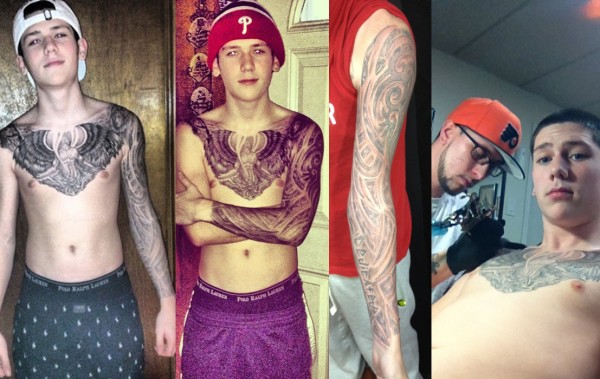 20 thoughts on “Getting Heavily Tattooed at Age 15”