Here’s a wonderful little story about the healing power of body piercing from Dion Jacobi at Modscene in Gladstone, QLD Australia (modscene.com.au). In this case I’m not talking about the oft-touted psychiatric or spiritual healing power of piercing, but something much more physical and literal.

Dion had a “young fella” about sixty years old come in, who after a failed nasal repair (centered on his right nostril) that was then made even worse by a blunt force trauma a month later, completely destroying what progress had been made, had been unable to breathe through his nostrils for the past fifteen years. As Dion says, “imagine what it would be like to have sleep apnea for a decade in a half, to not be able to do any major exercise, or to even eat and breathe at the same time.”

The guy decided that getting two large holes behind the collapsed passage might allow a little bit of air, so he went to Modscene to have them do a pair of 2ga nostril punches. What Dion found he was working around was as if someone had cut away the front portion of the septum, causing the tip of the nose to collapse in to the philtrum area, blocking airflow — the only way the guy could breathe through his nose was to physically push up the entire tip to open the airway. After the first hole was made, it was clear it was going to work, and after the second one was done — there were some unavoidable symmetry issues due to the extent and unevenness of the existing damage — he was, for the first time in a fifteen years allowed the use of his nasal passages.

“He left with the biggest grin,” Dion Says. “This is why I love my job!” 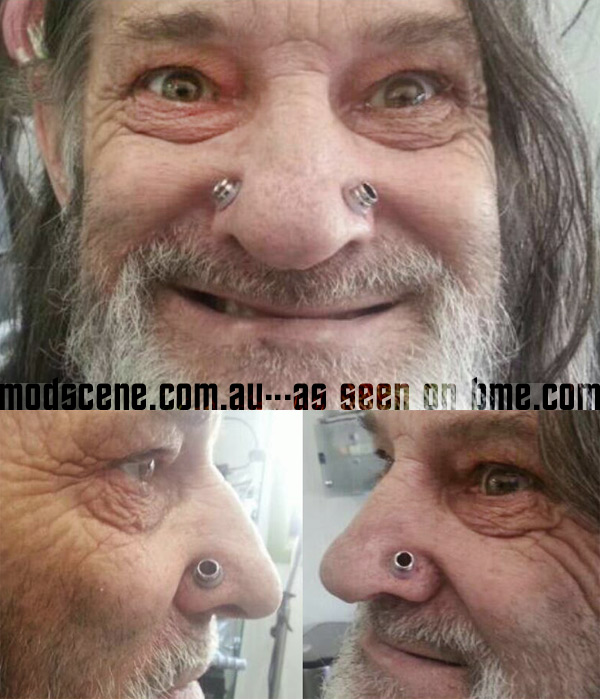 2 thoughts on “Sure beats a tracheotomy!”