I got a message from Heather Simone this morning asking me how common multiple tongue piercings were, and I totally brushed it off — “psshaw! lots of people have two tongue piercings, get over yourself!” and she replied with something like “oh, because I have THIRTEEN OF THEM and I wondered how common that was…”

Of course I was, like, “THIRTEEN?!?! Well why didn’t you say that in the first place!”

I don’t think thirteen is a world record, but I wouldn’t be surprised if there are less people with ten or more tongue piercings in America than there are States in the Union (although that’s a bad metaphor as she hails from Leighton Buzzard, England) — Heather’s piercings are much, much more unique than I’d given her credit for.

I asked her to tell me a little more about them, and she tells me that initially her plan was to get six of them, in a cross shape, but by the time she hit that goal she was totally addicted and now the design motif is something closer to “where will they fit?” The piercings are all done in 14ga, and as she’s gotten more of them she’s had to start putting smaller beads on the bottom to keep it all comfortable.

Her first six or so tongue piercings were done by “varying artists” that she “barely remembers”, the next few by Blue Jigsaw, and since then — the most recent four — are self done. I asked her if her speech or anything else is affected by having so many, and besides the healing period (“and sometimes not even then”), the answer is no.

In addition to the twelve vertical bars, Heather also has a rare horizontal tongue piercing, done about ten years ago by Mark Stubbings — it actually took her a year to find him after first seeing horizontal tongue piercings on BME and deciding she had to have one. That said, of all the piercings she says the horizontal was the most trouble, including biting through the PTFE bar that she initially wore in it — but it settled down and it’s still there, making this project all the more unique.

As to how far she’ll take it? There’s no upper limit, so she says it’s really just a matter of how many seeing how many she can fit without it starting to majorly affect eating or speaking! 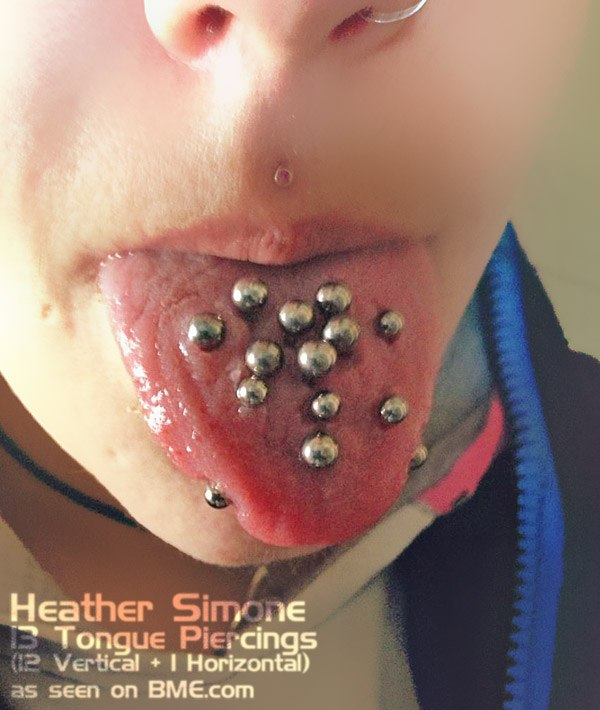 EDIT/UPDATE: Dominick Arduino, piercer at Starlight Tattoo (starlighttattoo.com) in New Jersey just topped Heather with this photo of one of his customers (who you may recognize from the BME galleries due to the distinctive jewelry — and remember, they can key your car with their tongue if you say anything bad!). This photo, taken last year, shows it with sixteen piercings — sixteen spikes capable of turning fantasies into nightmares — but since then they have added two more (and I am sure will do more after that). I’ll update with a more recent photo when I am able. 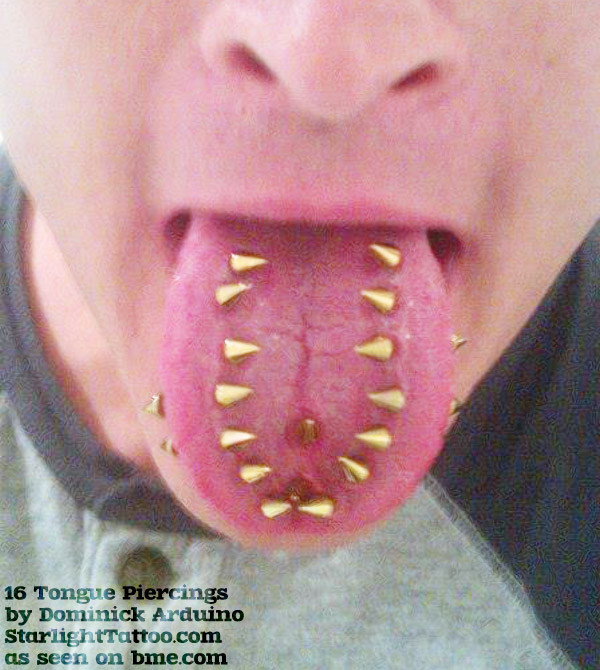 13 thoughts on “13 Tongue piercings… and climbing!”