We’ve all heard stories of when someone feels like they’ve been given poor service at a store or a restaurant because of being heavily modified. I’ve felt like the scene in Pretty Women before where I’m told the store has nothing for me but last night was the first time in a decade that I have ever been refused entry into a restaurant based solely on the fact that we had tattoos.

Last night around 10:30pm, I headed to CityWalk in Universal City, CA with Norm, Charlie and Vanessa Roberts and our friend Jason. We had tickets to see Avatar at 12:10am and wanted to get dinner first. Everything but Subway and Saddle Ranch Chop House were closed. We walked all the way from the movie theatre to Saddle Ranch where Jason and I went in first and got a table. I noticed that Norm was being held at the door. I went back to see what the problem was and found that they were making him remove his clothing to inspect his tattoos. As I asked what the problem was, I was asked to step aside and Norm and I were escorted out of the line to get in, even though I had already been given a table.

Upon further inspection they told us that we had “gang tattoos” and would not be allowed into the restaurant for the safety of the other patrons. Those of you that know us know that we have no gang affiliations, nor do we have any gang tattoos. I’m covered in Flower and faerie tattoos and that’s it. I guess the “Always” on my hand now stands for some gang that I have no idea about? Norm was a gentleman about it but I wanted to talk to the manager even though we had decided we didn’t want to spend our dollars at a businesss that discriminates against tattooed patrons. We left to go to Subway, which by the time we walked all the way back, was closed.

The lesson that we all need to know is that our dollar effects the decisions that corporations make. I’m asking that you do not visit the Saddle Ranch Chop House or their affiliated restaurants.We should come together and boycott them.

If you want to make a difference, email Alex Chavez (Senior Manager) at [email protected] and let them know that you don’t appreciate rampant discrimination by management against customers who have tattoos and that you and your friends will not be visiting their establishment. You can also call them at 818-760-9680 or send your letter via fax to 818-760-9686. Remember to keep your emails/faxes/phone calls polite and well written otherwise they will just cast us off as they already have. 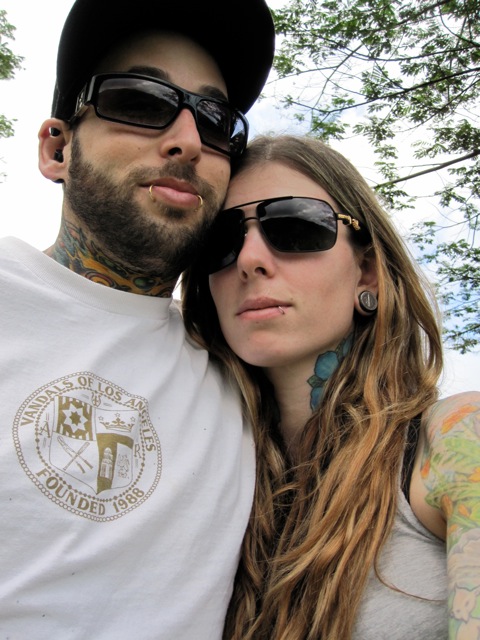 Do we look like “gang members” to you? Nope, didn’t think so. Using an excuse like that to discriminate against tattooed individuals is reckless and irresponsible. We all want to be able to visit a restaurant and be safe but using a fake claim that we had “gang tattoos” to discriminant against us using their “anti gang tattoo policy” because we are visibly tattooed is unacceptable. Help me to rectify this situation by making sure organizations like this don’t use their policies to discriminate against everyone who is visibly tattooed.