Speaking of small implants, another one I saw recently that really struck me was this little tiny martini-glass implant put into his fiancé’s ear by Brendan Russel of Tribal Urge in Newcastle, NSW, Australia. When I first saw it, I actually thought that it was a white ink tattoo, because that’s how it comes off in photos (I’m sure there’s a subtlety to the design that you can only see in person). The implant was hand-carved by Brendan, and is incredibly thin, just 1.5mm (a little smaller than the diameter of a 14ga ring), with the edges all carefully rounded to ensure it doesn’t irritate the sensitive skin of the ear — the only part of the body that you could put something this small into and still have it show. 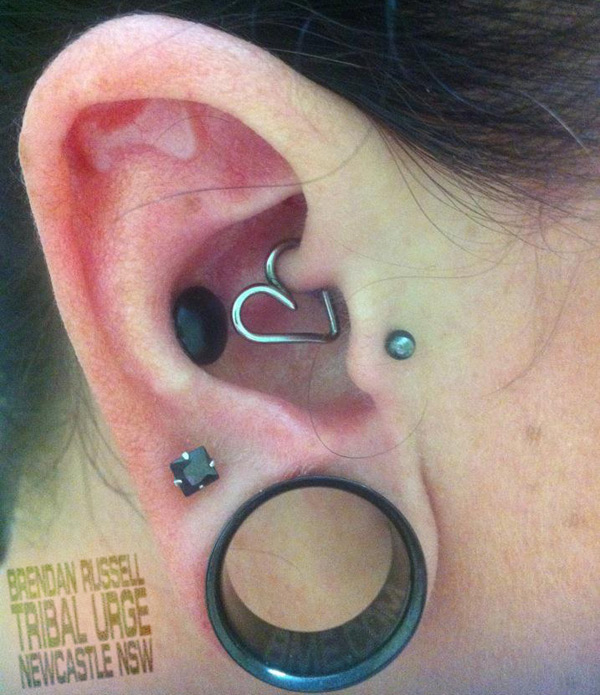 And speaking of hand-carved martini implants, you may remember this piece which was featured in the ModCon book (so this is from the “early days” of implants). Because this was going in a much fleshier location than the ear, it’s much, much larger, and even at this size it barely shows in its healed state. 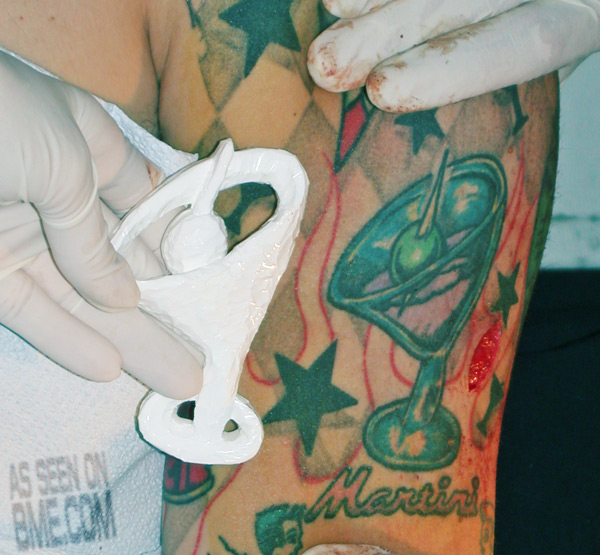 This star is one of the bigger ear implants that I’ve seen — you really couldn’t push its diameter much bigger without potentially running into problems. The topographically sculpted silicone star is about 15mm across, which was the biggest implant that Erwan of Dysmorphic in Lyon, France could fit in the location. The other implant pictured below, the question mark placed behind the ear, is also custom carved, as are all of Erwan’s micro-implants. Click either for a closer look. 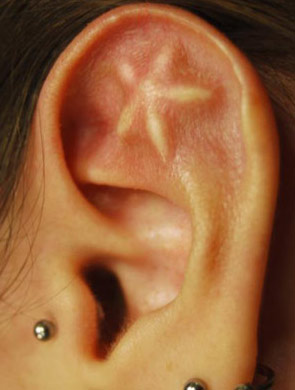 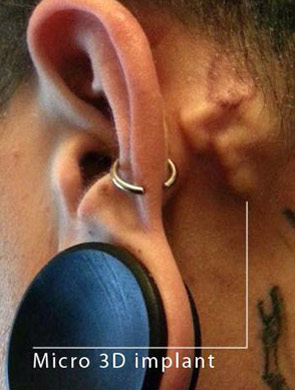 An alternative to the various ear pointing procedures that can give a person an entirely different sort of anatomical self-expression is using an implant to augment the outer helix ridge/fold of the ear. In this example, Pablo Perelmuter (pabloperelmuter.com) of Buenos Aires, has placed a what looks like a set of four beads but is actually a single 6mm silicone bead string manufactured by Steve Haworth — using a single piece like this ensures there will be no shifting and the placement will stay perfectly spaced (and they’re quite soft and don’t tend to bother the wearer even in such sensitive placements). Pablo says that the procedure went well, although it became quite swollen initially. These healed pictures were taken at eight months.

Edit/Update: I should add that this implant ended up being removed two years later, because the person it’s on was in nursing school and had some concerns it could affect their career options negatively. The removal procedure was fast and simple. I really hope that people considering body modification procedure always have an “exit strategy”, because it’s quite common for life to change and for one to find oneself needing to “normalize” ones appearance — this is one of the reasons I worry so much when I see teenagers getting irreversible and socially daring procedures like eye tattoos. 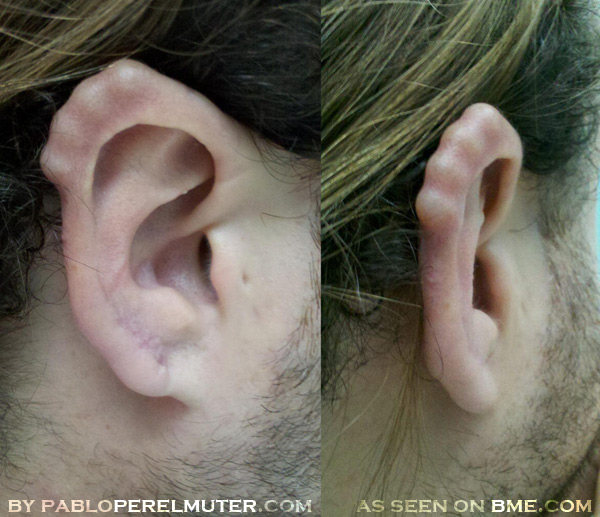 As absolutely lovely and quite discreet star-shaped implant by Lary (larypiercing.fi) in Turku, Finland. It looks gorgeous for being only six weeks old — as I mentioned in a recent posts, it can take up to a year for these very fine implants in the ear to settle and really be properly visible. The cute little heart-shaped daith is nice as well of course, but you can’t beat the subtlety of these ear implants — the sort of thing that must get a lot of double-takes from strangers on the street who notice it out of the corner of their eye, probably wondering if it’s something the person was born with, or an elective procedure, since I doubt that mainstream awareness of this type of implant is that common. 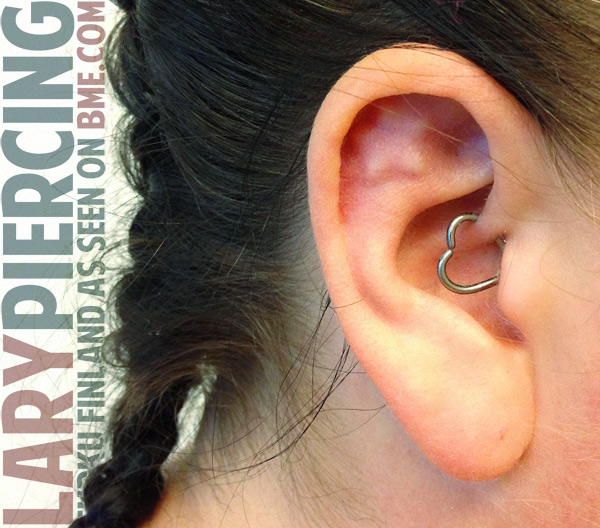 Speaking of great custom implants by Arseniy Andersson of Total Ink Body Modifications in Saint Petersburg, I’ve been meaning to share with you this incredible miniature brass knuckle implant that he put in a customer’s outer conch flat six months before this photo was taken. I’m always amazed at the beautiful work that people have been doing in ears — it works so nicely because the thin tight skin shows fine detail better than nearly any other part of the body, and the fold of the helix makes for a very convenient place to hide the insertion incision. That said, it’s important to note that the ear is a fragile part of the body that is highly susceptible to infection — infections which become trapped manage to spread inside the cartilage can literally destroy the ear in a matter of days — so it is important that this type of implant be done by an experienced practitioner using high quality materials.

EDIT/UPDATE: I wanted to draw attention to Arseniy’s comment in which he mentions that for the first five months the implant was almost invisible. The skin settled down very slowly. He warns that with complex fine-detail ear implants you should understand it could be a year before your implant design is visible, and that it is possible it will never become that visible.

PS. It’s funny thinking back to the brass knuckles implant that Joe Amato did many years ago (posted almost seven years ago in fact) in a woman’s chest and how the viral internet went completely crazy over it. Even on BME it generated hundreds of comments, and across the internet it drove people into a ranting frenzy. I doubt this picture, which is arguably far more “extreme”, will do anything of the sort. It’s amazing in what a short period of time we’ve become used to (and numb to) body modification.

Everybody has seen fun pictures of people showing off their teeth through the holes of immense labrets. Now, that’s a great goofy trick if you’re happy with your megalabret and are pleased to pop it back in after the gag photo is snapped, but it’s not so great if you wish you didn’t have that gaping hole in your lip. To refresh your memory as to what I’m talking about, here’s a funny picture of Jared Karnes showing what he does “when people are already being overly dramatic about it” — although most of the time if he’s not wearing jewelry you can barely see the hole, as you can see from the subtle slit on the left side of the image.

Luckily closing these big labrets is not a complex matter as long as the lip has not been stretched dramatically (which would make it more like the reconstruction of a stretched lobe and would almost certainly require a complicated surgery). Here’s one done by Roni Lachowicz, showing the “before” photo, a picture a week later after the stitches were removed, and a fully healed photo a few months later. Since many people naturally have a scar in that location without ever having had a piercing (can someone explain to me why?), it’s unlikely to make much of an impression, especially if hidden under facial hair. Zoom it of course (and most of the other images too).

Speaking of Roni, it’s been a little while since I’ve posted one of the industry’s most striking individuals, so let me give you some eye candy. If memory serves, her eye tattoos are self done, which always impresses the hell out of me. Which reminds me that I should mention that my eye hurts a lot today. I have a bad headache, brought on by central apnea most likely, but it’s manifesting with a great deal of eye pain. I don’t know if it’s real or psychosomatic, but it’s something worth being aware of — real or not, people considering eye tattoos should be aware that even five years later, it can still ache badly from time to time!

And finally — and I know I have really started to drift away from my original subject — I wanted to share one more piece of Roni’s recent work, a great looking tiny little star implant on the flat of the ear. It’s about two weeks old in this photo, so you can see a bit of dry skin over the incision. If this picture was taken even a few days later, you’d have no idea how this implant was inserted, because the incision is so nicely tucked underneath the fold of the helix.