“The goal of all civilization, all religious thought, and all that sort of thing is simply to have a good time. But man gets so solemn over the process that he forgets the end.”

As you probably know, BMEfest 2004 took place this past Friday (July 2, 2004) here in Toronto (a giant thank you to everyone who helped put it on, especially to Blake and Badur who did almost all of the hard work in setting up the event). We had approaching 600 attendees, four bands (Monroe, Defence Mechanism, The Matadors, and The Legendary Klopeks), a second run at The Pain Olympics, as well as performances by The Lizardman and Orbax’s Circo Loco. Because of the size this year we had to hold it at a different venue than the traditional “back yard” environment, so we went with Lamport Stadium (literally a football stadium) which was the only space available downtown. 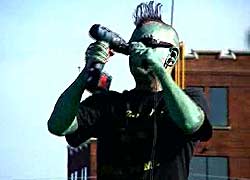 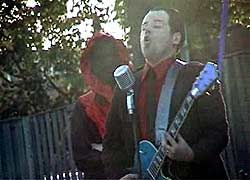 The video above was shot by my sister (iam:hellisfum), although she’s asked me to emphasize that it’s just something that she patched together in an afternoon for me and shouldn’t reflect on her as an editor!

While the overwhelming response was extremely positive (more), I heard a few others opining for years gone by and I as well missed some of the freedom and laid-back atmosphere we were able to get at last year’s rural party. Because we get so many legal threats to attack the event, we had to make sure that we did everything by the book, which meant permits, security staff, restrictions on bloodplay and suspension, control of smoking, fireworks, and alcohol, and other similar annoyances. There were also some big mistakes made in terms of the way things were laid out (why oh why didn’t we put the beer tent and the bands closer together), and although everyone involved worked hard to try and minimize these issues, the fact is that given our constraints they weren’t something we could entirely eliminate. 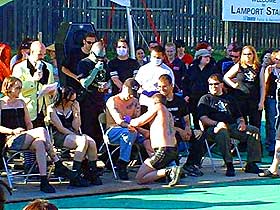 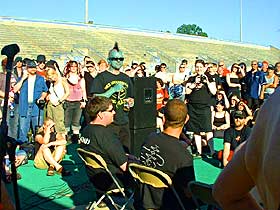 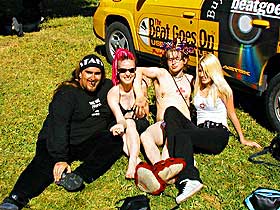 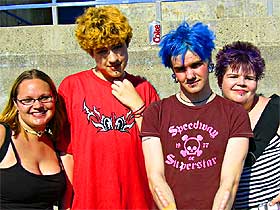 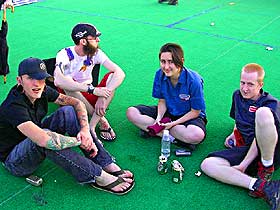 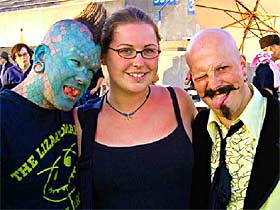 Just some of the photos from BMEFEST 2004.
Lots more are in the BBQ gallery.

So what should we do next year?

BMEfest is an event for the community on BME. So I’m asking you for your feedback and your desires for next year. First of all, I should mention that we do have a few constraints in our planning:

As I see it, there were a few main problems this year:

There were little issues too like not having any shade so people were literally bursting into flames, but those are mistakes that are easy to make and easy to correct the next time around. Anyway, here are a few options for next year:

Have the event out on a farm again, and skip the law — out of sight, out of mind. This is basically what BMEfest 2003 (more) was. It’s a very relaxed and friendly way to do it. Some of the costs on rentals go up, but other costs go down. The only (giant) negative to this option is that it means the event isn’t on transit in a big city, so people either have to drive or we have to arrange travel.

Bring the event back into the backyard. Unfortunately this simply isn’t that legal — it’s actually quite miraculous that earlier years where we did this were not shut down. However, if we could get a series of backyard BBQs in Toronto, we could run shuttle buses between them all day long, and have a “distributed” event. However, I’m not sure that we wouldn’t just have “clumping” at single locations and many people wouldn’t meet each other like in a single space. It might however allow us to bypass many of the legal requirements, and it would be small and friendly… but an organizational nightmare.

I’m not sure this is a very good option, but I could “get out of the BBQ game” and leave those events up to others. Rachel and I could instead focus on smaller specialized events like ModCon and ModProm and so on.

Do another stadium or other downtown large-venue event, address the problems that we had at this one (which wouldn’t be hard to do), and make it big big big big. (This would be the obvious choice of course).

Because most people travel to come to BMEfest it wouldn’t cost any more to have the event in the Caribbean. We could even charter a big jet for everyone from Miami and back at the end. It sounds nutty but I really think it could work, and we could give people both an amazing BMEfest and a Caribbean vacation for the same price as one in Toronto. If you’ve seen my pictures from there, you know where my vote could fall. Toronto is nice, but imagine staying on a Caribbean beach with all your friends from BME, going snorkeling, swimming, or just enjoying a lot of rum. 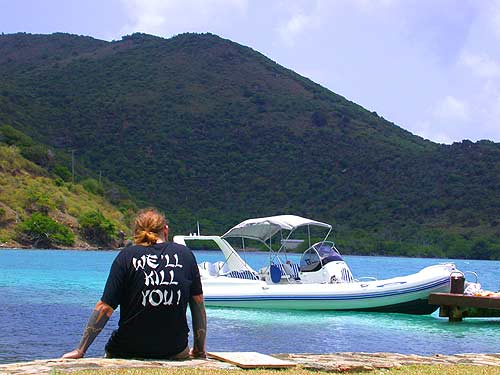 I have some ideas about what I think the best option is, but this isn’t entirely “my” event. It’s your event. So I need to know what you’d like to see for next year. Feel free to say what you liked and didn’t like about this year, and what you’d like to see added or changed next year. Let me know if any of the above options strike you, how you think they should be implemented, or if you have totally different ideas altogether.