“If particular care and attention is not paid to the ladies, we are determined to foment a rebellion, and will not hold ourselves bound by any laws in which we have no voice or representation.”

Every woman I know that’s been to a tattoo convention knows what most of the photographers can be like — dodgy old men trying to convince you to come to their hotel room. You can easily recognize their sleazy work in the magazines; they’re the guys that think you have to be nude to “properly show off” that little star on your wrist.


“Want a picture of your sleeve in the magazine? Let’s get you out of that shirt and bra, sweetie. It’ll look better that way. Trust me, I’m a photographer. Now push your breasts together for me. Look sexy, baby. Why don’t you take off those pants as well? Don’t worry, honey, all the other chicks are doing it too. Don’t you want to be famous?”

Ever wonder why some tattoo magazines are full of women whose only shared characteristics are bad tattoos and bared breasts? It’s because the men taking the photos don’t care about the tattoos — they only care about getting girls naked. If you’re a regular at tattoo conventions, I’m sure you know the photographers I’m talking about. We’ve all been harassed by them. After turning them down, I have had these old men sneak back about twenty feet and take my picture with a zoom lens, only to end up with nothing but a shot of me holding up my middle finger.

This is a tradition that I want to stop.

Earlier this summer, after spending an hour at the Toronto convention and being completely disappointed in the atmosphere, I left. While I’d already told everyone I was going, I began to question my upcoming plans for the Montreal convention. Should I go? Should I spend the money on a booth? Will people be just as grumpy? After all, the French, especially the Quebecois, do have a reputation for being rude to us Anglophones.

Spending one minute at the Montreal Tattoo Convention completely shatters those stereotypes. Friendly people had come from all over the world, and it was clear that they were there to have a good time. There was no posturing or attitude, and it just felt like everyone was there to meet the top international tattoo artists and to simply enjoy the art.

Even though many of the people attending the convention spoke only French, the language barrier never hurt us at our booth. I made my way through the day with a lot of smiling and body motions to show people what I wanted them to do. I had my lovely assistant Jen translate whenever I couldn’t get my intentions through, and Phil Barbosa (who you know as the photographer who shot the ModCon book and other BME events) helped me keep the lighting and technical aspects in check.

I started off taking pictures of the few people there that I knew and then started tackling the crowds. No pressure and no sexualization. I stuck with “may I take your picture?” and people seemed to liked that. Now let me share some of those pictures with you.

I’d love to continue shooting conventions all over the world. I really had a great time taking portraits of both old friends and total strangers. Thank you to my assistants for the help, to the organizers of the convention, and especially thank you to everyone who let us shoot them. It was wonderful getting to meet all of you (and to see some of you again). I hope you enjoyed the photos, and finally let me also thank that small minority of photographers out there that understand that women with tattoos are still women deserving of respect and courtesy.

Copyright © 2004 BME.com Requests to republish complete, edited or shortened versions must be confirmed in writing. For bibliographical purposes this article was first published July 13th, 2004 by BME.com in Toronto, Ontario, Canada.. 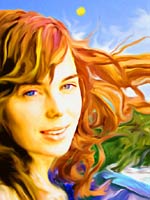