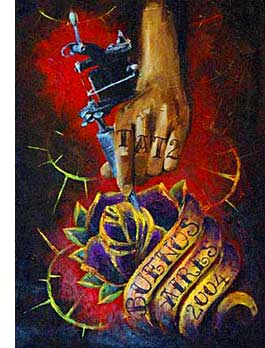 I’m ashamed to say that if you’d asked me three years ago what Buenos Aires (or any South American city) looked like, I’d picture some shanty-town Caribbean city with a Hispanic population — making me a typically ignorant imperialist North American. However, through IAM I started meeting Argentinians (and others from across South America), and it soon became obvious that South America had a cultural diversity and modern society not much different than our own here in Canada. Since then, Rachel and I have wanted to visit what seemed from the outside like a wonderful place.

After several aborted attempts, we finally made plans to attend the Buenos Aires, Argentina tattoo convention hosted by Piel Magazine (pielmag.com) at the end of October 2004, organized in part by our friend la Negra (iam:la negra). The trip was almost aborted as Rachel was quite sick before we left, but she bravely faced the fifteen hour flight and we were met by Javier (also from Piel) and la Negra at the Buenos Aires international airport.

Luckily a few wrong turns on the way into the city let us see the sparse outskirts, which looked quite similar to poverty stricken regions of Canada or the United States. As we moved toward the heart of the city — the airport is about a half hour drive — it became clear that this was a truly monstrous metropolis. At ten million people, it dwarfs anything in North America except Los Angeles and New York, although it’s still far from the largest Southern city. I asked Javier how many tattoo studios I would find in the city, expecting a hundred or so. “About a thousand,” he told me, “but most are very local.”

The “modification scene” in Buenos Aires, and I imagine across most of South America, feels like it did here in Canada ten years ago. On one hand, it’s good, because it means everyone is enthusiastic and incredibly excited, but it also means that many people are operating below what is generally considered safe. While attempts have been made to set up professional organizations to encourage the use of proper contamination control and so on, only the better studios go to that effort. In part because of US financial wars with South America, Argentina has had several devastating economic periods recently as well as political turmoil, which has made many systems bribe-based. This has complicated cleaning up the tattoo industry because while an autoclave is officially required by the health board, the inspector would far rather visit for a monthly fifteen peso bribe. So they’re quite happy to turn a blind eye when a studio chooses to pay this bribe rather than go the more expensive route and upgrade their facilities.

That said, don’t get the idea that Buenos Aires is a backward or criminal city — it’s a safe, modern, multi-cultural metropolis. The food is good and the water is perfectly safe to drink. A myriad of languages are spoken (including English), Internet access is easy to find, the architecture is beautiful, the people are warm and friendly, and the heart of the downtown bears an uncanny resemblance to Toronto’s waterfront region. Temperatures are about the same as you’d find in the southern United States, and other than the truly maniacal driving style, most of what you find in Buenos Aries is incredibly close to any number of European and North American destinations.

The convention itself was hosted at the Centro Cultural Borges, an art gallery in the traditional sense of the word. Approximately fifty studios and suppliers, mostly from Buenos Aires, but with some travelling from across South America and one from Spain, filled two halls which over the weekend were attended by about ten thousand visitors. Entry cost was eight pesos — less than three dollars. Because of the devalued currency, most things cost very little in Argentina. Cab rides across town cost only a dollar or two, a large apartment can be rented for a couple hundred dollars a month, a beer costs less than a dollar, and meals cost less than half what we’d pay in Canada. Tattoos in Argentina cost about a third what they cost in North America and Europe, which is in part why only one artist from off the continent made the trip. It’s unfortunate though — I can’t imagine a much more rewarding working vacation for an artist than South America.

People at the convention were very friendly, and while many spoke almost no English, we had a note reading (in Spanish), “May we take your picture for a Canadian tattoo magazine?” Everyone was gracious and happy to help out, and a lot of people took my picture as well. The bustle of the convention was much more “happy” than any convention I’ve been to up north. I don’t know if it’s because it’s a booming culture, or just because South Americans are joy-filled, positive people in general.

Below are some of the photos that Rachel took in the studio space that Piel provided for us. I can’t thank Javier and la Negra enough — they went out of their way to make us feel welcome and provide us with anything we needed.

People almost seemed not to believe me when I told them how much I was enjoying myself both at the convention and in Buenos Aires. Maybe the grass is always greener on the other side, but to those of you in Argentina, let me be clear: there are many things about your country that I envy. Don’t assume things are better in the north — they’re just colder! Along those lines, I asked Javier what his plans were for the future of this convention, now going into its fourth year. He told me that one day he hoped it would be a world class international convention.

This surprised me — this year saw top quality artists from around the continent attending, tattoos, piercings and modifications, art fusion demonstrations, body painting, music, art galleries, contests, demonstrations, and everything you’d expect from a big international convention — including a performance by Norway’s Pain Solution. Other than not getting much media attention outside of South America, this already was a world class convention as far as I was concerned.

“When do you think that will happen,” I asked. “Maybe in year four or five?”

Javier didn’t think it would be recognized as a large international convention until maybe year fifteen. I hope he’s wrong — the only thing that keeps it from happening is jingoist North American tattoo media (BME was the only one there) and the economic issues that make it less profitable for traveling artists to attend. Maybe after reading this, and looking at the snapshots we took around the convention, studios will start to think seriously about visiting Buenos Aires and other Southern conventions instead of boring themselves with yet another American or Canadian show.

Think about it: the airline ticket is no more expensive than flying across North America. Sure, you’ll charge less for the tattoos, but your cost of staying in Argentina is half to a third what it would cost to visit a North American city convention, and you’ll gain far, far more on a personal level than you ever could staying close to home. I know I’ve already said it a couple times, but South Americans are vital, wonderful, gregarious, welcoming, happy people, and their continent — and its inhabitants — are extremely attractive.

As good as time as we were having, especially getting to finally meet many online friends in person for the first time, unfortunately the illness that Rachel had contracted in Toronto got progressively worse over the week, and on Saturday night, the second day of the convention, we had to fly back — as I write this she’s currently in the US receiving medical care. She as well though, even through the sickness, agrees that Buenos Aires was a wonderful city and looks forward to returning and exploring more of the country and the continent.

So our coverage includes only the first half of the convention. Sadly this means we missed Håvve’s Pain Solution performance, which I’ve been looking forward to since reading his book — I’m sure there will be more coverage on Piel’s website as well over the next few weeks. But missing it gives me an excuse to travel again! 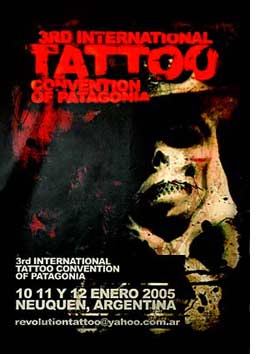 South America is far from a cultural wasteland. There’s another Buenos Aires convention coming up at the end of November, and a convention farther south in Patagonia from the 10th to the 12th of January, 2005 (that’s the poster on the left of course). I believe it’s being organized by the artist that’s the first portrait in Rachel’s studio set above. Everyone I talked to spoke highly of this tattoo convention — “It’s wonderful; you spend all day swimming in the river, and then the convention opens at five and goes until two in the morning.”

If you don’t know what Patagonia looks like, go type it into Google Images and look at the stunning results. Knowing how much long flights stress me out, I can’t believe I’m making these plans, but I’d like to have BME down in Patagonia covering this convention. I encourage all North American (and European) artists and body modification fans to consider it as well — you won’t regret it, and it will open your eyes to another world and a parallel culture, and I think of all people, tattooed people can appreciate multiple worlds.

In closing, let me repeat what a wonderful time I had at this convention and in the country in general. Thank you to Javier and la Negra and Piel Magazine for their generosity and for throwing a great event, and thank you to all the wonderful people we met who made us feel so welcome.