“There’s no way to rule innocent men. The only power any government has is the power to crack down on criminals. Well, when there aren’t enough criminals, one makes them. One declares so many things to be a crime that it becomes impossible to live without breaking laws.”

Earlier this year Tony DeLuca and others introduced several pieces of legislation to regulate piercing and tattooing in Pennsylvania. House Bill 832, which requires parental consent and presence for the tattooing and piercing of minors, passed earlier this year, albeit with a typically unrelated Senate amendment also banning greyhound racing. The second and much longer bill, House Bill 615, has passed the House and is currently in the Senate’s Health and Welfare committee.

It’s not so much that the bill is bad, but that’s it’s just typical government. In its errors and poorly considered drafting it illustrates the truth of the motto, “that government which governs best, governs least.” Like far too much modern legislation, the public would be best served if tax money was not wasted developing and enforcing this new law. The bill is ineptly written, and like most government actions, is beholden to special interests and lobbyists, as becomes clear when we begin with the definitions section.

“Body piercing.” The process of breaching the skin or mucous membrane for the purpose of insertion of any object, including, but not limited to, jewelry for cosmetic purposes. The term does not include ear piercing or nail piercing.

The disclaimer that “ear piercing” isn’t covered by this piercing bill is fairly normal due to the insidious lobbying power of the ear piercing gun industry. However, the instant we read a line that’s clearly fraudulent — can we seriously be proposing that an ear piercing is fundamentally different on a biological level than, say, a nostril ring? — we can be certain that the entirety of the bill is tainted.

The definitions section goes on to define “corrective cosmetic artist” (another group with lobbyists) as something separate from just a tattoo artist. Tattoo artists tend to get started after a year or more of apprenticeship and careful guidance from an experienced mentor. “Cosmetic” tattoo artists on the other hand are often nothing more than estheticians with a week’s training (buy now, and it’s included in the price of the equipment!) — much of the cosmetic tattoo industry is akin to artists who buy a “tattoo kit” out of the back of a lower end tattoo magazine and learn to tattoo from the included videotaped instructions. But I digress…

The bill also talks about safety regulations, registration and accounting processes, but leaves them open-ended, saying that the Department of Health will still have to define them. It is difficult to fully comment on the validity and benefits or lack thereof with a law whose heart reads “to be announced.”

But let’s not get disheartened too quickly. The bill has an interesting limitation put on it.

(f) Limitation.--Nothing in this act shall be construed to permit the department to regulate artistic aspects of tattooing, body piercing or corrective cosmetics which are unrelated to health, sanitation, sterilization or safety standards.

Sounds good, right? Unfortunately it’s a typically hypocritical statement, since we’ve already read that the bill is imposing artistic limitations by giving special status to ear piercing, exempting it from the regulations. Even if you use a spring loaded altar for bacteria to rip a hole in your lobe rather than an autoclaved needle, it’s still body piercing, and it still carries the same family of risks, if not more.

The bill goes on to list some unusual requirements and restrictions for the artists themselves — “minimum health standards”. I believe that most of these are well-intentioned, but in reality are somewhat nonsensical. Infectious diseases are taken very seriously by the bill, as they should be, but the ideas are misapplied.

(b) Infectious diseases.--A notarized statement from a licensed physician shall be provided to this department... confirming that the artist was examined by the physician, a test of the artist’s blood was made and the results of that test indicate that:

(1) the artist is free from all contagious and infectious diseases, including hepatitis B;

That sounds great, I know, but it’s basically irrelevant. Under no normal circumstances is the client at risk from the piercer’s blood — the risk is entirely the other way around. Diseases like this require blood to blood contact, and while a studio that doesn’t control contamination issues could pass blood between subsequent clients, or a clumsy piercer could have a needlestick injury pass blood from client to piercer, there is no reasonable way for blood to pass from piercer to client. This bill is incompetently written by people who do not understand the issues involved. Especially in the case of government and law enforcement, comprehension must come before legislation, and that is not happening here.

The bill also requires that aftercare instructions be given. Of course I support that, but the bill steps in to make an unusual footnote.

The written instructions shall advise the customer to consult a physician at the first sign of infection and contain the name, address and phone number of the tattoo or body-piercing establishment.

Yeah, and next time I run out of gas in my car, I’m going to call a metallurgist. First of all, most of the time someone thinks their piercing is infected, it’s not. Second of all, doctors have far less experience with body piercing and tattoos than those who actually work with them every day. This clause will have two results: it will generate increased income for doctors, and I believe that, if the instructions are heeded by the client, it will result in a lower standard of care due to doctors’ inexperience with body piercing.

Some interesting social restrictions are placed as well.

(a) Unregistered practice.--It is unlawful for any person to ... assume the title of “tattooist,” “tattoo artist,” “body-piercer,” “body-piercing artist,” “corrective cosmetics artist” or other letters or titles in connection with that person’s name which in any way represents himself as being engaged in the practice of tattooing, body piercing, or corrective cosmetics, or authorized to do so, unless that person has been duly registered and authorized to engage in the practice under this act.

So, basically, the government is taking ownership over these titles as restricted professional terms (just like a normal person can’t call themselves a doctor). Outside of the fact that tattooing and piercing are arguably folk professions a la pottery or dowsing that can’t rightly be treated as “titled” professions, can we seriously expect a government agency that has already shown incompetence in its understanding of this industry to assign such titles?

...the department may suspect or revoke any registration issued under this act for any of the following reasons:
(3) Being unable to practice with reasonable skill and safety to the public by reason of illness, addiction to drugs or alcohol, having been convicted of a felonious act prohibited by... The Controlled Substance, Drug, Device and Cosmetic Act, or convicted of a felony relating to a controlled substance...

This clause again shows the sociopolitical bias inside this bill, as the US government’s misguided “War on Drugs” perverts another law. Someone having a past conviction for drug dealing seems to me less worrying than someone having committed murder in the past — this bill bans the reformed marijuana user from being a tattoo artist, yet openly invites the convicted murdering rapist pedophile to pierce teen genitals. This entire clause should be removed. It’s irrelevant to the professional issues involved and the safety of the client.

Guilt by association? You can’t talk to anyone who they don’t like? These are starting to read like parole restrictions. Read broadly, this clause could ban apprenticeships, ban attending tattoo conventions, and certainly ban discussions with online friends of various levels. It’s wrong to punish someone because of who they know. 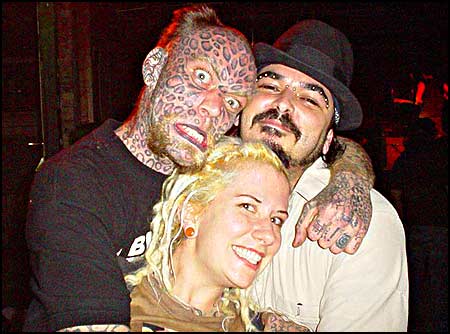 Finally, there’s one restriction that goes way too far.

(d) Facial tattoos.--It is unlawful for any person other than a corrective cosmetic artist registered under this act, or a physician or surgeon licensed in this Commonwealth, to perform facial tattoo services on any other person.

Didn’t the bill start off by saying that no restrictions would be placed on the art? Only on the safety issues? Clearly restricting tattooing to only certain parts of the body is entirely motivated by cultural reasoning, not by safety concerns. The inclusion of this restriction effectively reduces the bill to nonsense. Allowing permanent makeup to be tattooed — where society chooses the artwork by seeking out this year’s “normal” — but banning art chosen by the wearer as an individual, is clearly contrary to not only the declared purpose of the bill, but to free speech and expression in general.

“We won’t restrict your artwork, as long as you only produce the art we permit.”

So what to do? While I could be wrong, I don’t believe that the authors of this bill are overtly opposed to body modification or are trying to legalize cultural bigotry. It’s simply well-meaning but incompetent and misguided bureaucracy at work, and the best we can do as citizens is first to try and inform the legislative branches of our society to not pass ill-advised laws, and to reform those that already have passed. Barring that, we are left with civil disobedience, a path which is as strewn with hardship as it is with honor.

This bill is just the tip of the iceberg. The political process does not start and end on election day. As a citizen, you have more responsibility than just voting — you have to stay informed as to what your elected representatives are doing, and you need to communicate with them about your wishes. You can bet that the ear piercing industry is doing so, and because of their efforts, the law skips over them. People have the same opportunity. You need to call or write your government representative and let them know the wishes of their constituents, and that applies to everyone in the world, not just to residents of Pennsylvania.

One thought on “BME commentary on PA House Bill No. 615 [The Publisher’s Ring]”