Horror and science fiction motifs of course are not at all uncommon in the tattoo world, with the majority choosing imagery from modern “big name” films and those with mainstream cult status. Thus I was pleasantly surprised when my friend Midian2000 (who you may know as the organizer of the large So-Cal BME BBQs) chose an image from 1979′s ZOMBIE, perhaps the best living dead film of all time, by Lucio “Violence is Italian Art” Fulci.


I’ve been a serious horror movie aficionado since I was about nine, with Polanski’s “Fearless Vampire Hunters” being the first film to really move me. All of the art I have tattooed on my body is extremely personal, whether it’s original art, like the pieces Clive Barker created for me, or whether it’s traditional, like my Choctaw pipehead piece. This time around, I felt that it was a moment in my life where I wanted to recognize what part horror, from films to books, has played in my life, and to honor that element of who I am. The image needed, in a single frame, to capture friction, stress, fear, horror, terror, threat, and madness. It needed to be iconographic … an image that embodied the catharsis derived from true horror.

In Stephen Thrower’s amazing book Beyond Terror: The Films of Lucio Fulci one frame of film popped out at me: the infamous splinter scene from Zombie. I had to have it. The original piece of art was a poorly reproduced, stark, black and white picture, but I knew there was potential in it. When I originally told Denny Besnard (Avalon II, San Diego CA) that I wanted it rendered in nothing but black and red, he strongly disagreed, saying he’d prefer to do it in a palate ranging from black to red, with everything from white to orange and yellow, in between. He thought he could bring this simple, still image to life through a narrow range of color — the results, I believe, speak for themselves. 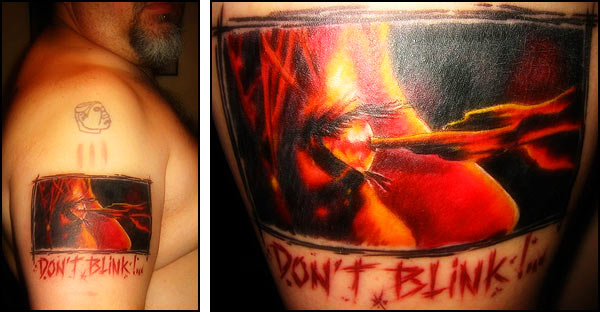 “If you blink, you miss so much…
so don’t blink at all if you can help it.”