FOX Network‘s PrisonBreak premieres tonight [Editor's note: my apologies to Rebekah for not posting this on time]. LincolnBurrows (played by DominicPurcell) is convicted of murder. MichaelScofield (played by WentworthMiller) is convinced of his brother’s innocence. Michael getshimself busted – but not before getting elaboratetattoos that hide the prison’s blueprints. According to the TorontoStar:


"Thetattoo takes about four to five hours to apply, if you've got twopeople working on it," said Miller. "It's a series of decals that fittogether like puzzles. They're kind of more sophisticated versions ofwhat you might find in a Cracker Jack box.

"You lay it down, peel it off and then seal it with glue, paint in thefiller parts ... it's apparently the most complicated imitation tattooever created, done by the art house that did all the special effectsfor Passion of the Christ.

"The tattoo will stay on for two to three weeks, if you don't scrub itoff with some solvents. Fortunately, we'll only be featuring it, Ihope, once an episode in its entirety, and the bits and pieces as we goalong, when I'm just looking at my forearm for whatever piece I need tofigure out what my character's up to for that particular episode."

Prison Break is the creationof Paul Scheuring.So far, it seems like it’s gotpotential. That means that there’s a fair chance that it will gothe route of Brimstone,which was nicely written and which didn’t last nearly long enough. 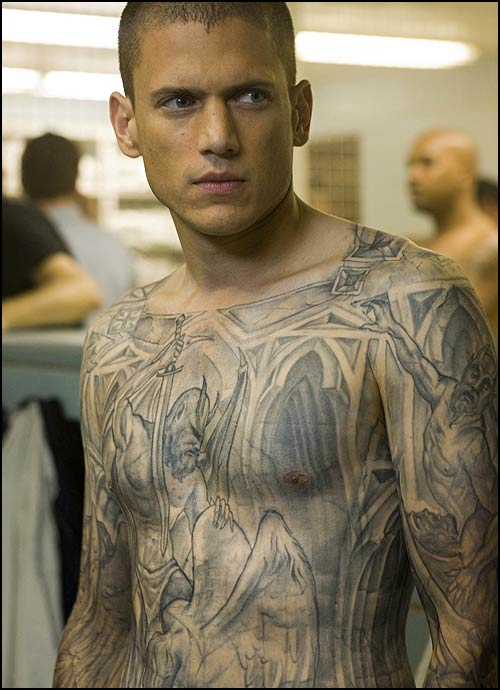 Update: glowimperial writes, “I wanted to pass the word that the designer of the tattoo featured in the series ‘Prison Break’ was designed by tattoo artist Tom Berg, who tattoos at So Cal Tattoo in San Pedro, CA. Tom also designed the William Blake inspired dragon tattoo worn featured in the film Red Dragon.”