Sometimes we pour our heart and soul into an idea. We research the hell out of every artist we can find, and we wait patiently for a consultation and then finally the day comes when we get tattooed. Then something goes wrong. The lines are a little off, the color is all wrong… it just isn’t what you wanted. What do you do when you think you’ve screwed up? What happens if your artist turns out to be nothing more than a pile of turd with a big ego? What do you do when no one will tell you what they really think? Well??

You turn to me. I’ll tell you what you really need to hear. I’ll let you know what went wrong and where you should go from here. I’ll be that little voice that says “That’s a really really bad tattoo.” And sometimes I might even say “Wow! That’s grade A work! Consider yourself lucky and make sure you help out your friends with recommendations since you obviously know what you’re doing.”

One of the hardest things about being tattooed is simply the fact that it’s permanent. The joke has always been that the worst thing you can hear your tattoo artist say is “woops!”, and it’s true. What if you just went to a bad artist for a small piece of flash? I know I’ve been there. I went in to get a small light blue star on my wrist bone. What should have been a 45 minute tattoo turned out to be a 3 hour ordeal. Of course I was 18 at the time, hardly knew any better, and I really just wanted something to remind me of my time in New Orleans. That piece has been covered up three times with black, and to this day, it’s still visible because of the scarring from the original “artist”. The one thing I can say about myself is that I learn from my mistakes and now only visit Top Shelf artists. I’m not talking about $350-an-hour artists, but those who are truly talented and care about the work that they do. I’m hoping I can help everyone learn from my and other people’s mistakes.

The first examples I have are of facial tattoos, specifically chin tattooing, which is most commonly — though incorrectly — called a Moko. “TA MOKO is a Taonga (treasure) to Maori and the purpose and applications are sacred.” — so unless you’re a Maori all you’ve got is a chin tattoo.

I have to out myself as someone who is not a big fan of chin tattoos. More often then not, they’re not symmetrical and just generally not well done, and they cause the corners of the lips to look like they’re going at a downward angle. I’m trying to compare apples to apples here so we’ve got two pictures of two freshly done chin tattoos. The first one comes from our very own IAM:Xombie. 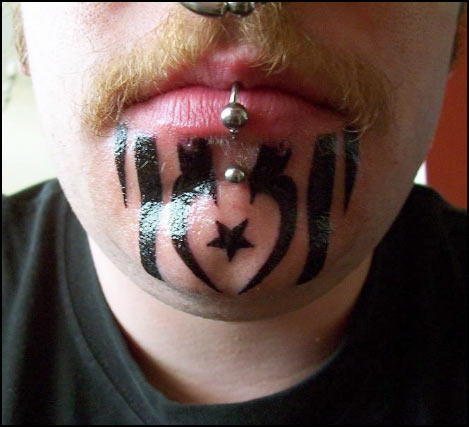 While the shine of the new tattoo is a bit distracting, I can immediately see that the right hand point/line is a bit wider and longer than the left side. The right middle line is also slightly thicker. The black is very bold though and initially looks to have been evenly applied. My only recommendation for this piece is that when Xombie goes in for a touch up, that the artist bring the tops of the tattoo up to the lip line in a more even fashion and to beef up the lines on the left hand side. All in all, I think this is a good tattoo. Bravo.

I didn’t even bother to read the email that had accompanied the picture until after writing the review.

“That tattoo is basically a design with meaning. The meaning of it is that I have never felt love before until my son was born. He is the Star in the tattoo. The lines wrapping around the tattoo are a broken heart. Which symbolizes with the star in the middle of it, that since he’s the first person I have felt love for, that he is sort of mending my heart, and pulling it back together again…

The rest is just decoration.”

It’s nice to see meaning in a tattoo with such a prominent position on someone’s face.

The next example we have is on IAM:The Eternal. 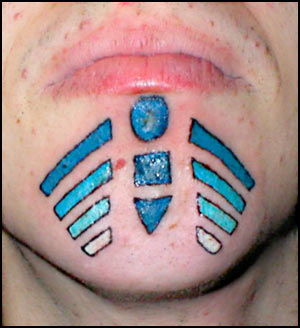 I really hate to do this, but I think it needs to be said. This tattoo seems very poorly done. Any tattoo artist that does a design like this yet doesn’t bother to square the lines deserves to be shot. One could argue that the person getting the tattoo is also be to blame, but I don’t think that’s the case. When you go in for a tattoo, you’re incredibly excited and it’s hard to make a rational judgment call. Sometimes it’s best to bring a friend that you can trust who will give you an honest opinion. Often times, when browsing IAM, I see pictures posted of poorly done tattoos, and the only comments on them are “Hey, that’s awesome” or “Wow, great tattoo”. Perhaps the line of thinking is that there is nothing one can do to correct it, so why act negative but that’s simply not the case anymore. There are many competent artists out there. It’s just a matter of finding them and using them.

My biggest problem with this tattoo is that the right side doesn’t even come close to matching the left side. The biggest skill a tattoo artist should have is tracing. They do it day in and day out. So why do so many artists seem to have a problem with symmetry? Why wasn’t the left hand side of this traced over to make the right side? Why don’t they look the same? They’re not even on the same angles. The triangle and square in the middle are not straight. They’re slightly offset and the lines aren’t true.

The outlines are probably going to blow out. I haven’t seen a healed picture of this tattoo but that is my prediction. There will end up being a hazy shadow around it and even some dramatic blotchy marks around the edges. They also aren’t evenly applied. The ink colors also look off. My guess is that the artist mixed a darker blue with white to make the lighter blues, which is an acceptable and common practice but these colors look milky and hazy.

My personal suggestion would be a complete cover up, perhaps coupled with a little lazer removal (the two sides are off enough in places to greatly limit coverup options, but a slight touch of laser could help a lot) — maybe something similar to the example I’ve posted below, assuming the basic design motif is to be retained. 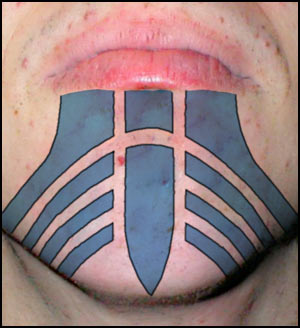 There have been many studies done showing how a baby prefers the face of a person with a more symmetrical face. Denzel Washington was voted in People magazine as one of the 50 Most Beautiful People in the world in 1990 and then People magazine’s Sexiest Man Alive in 1996. This has been attributed to the fact that he has one of the most symmetrical faces out there. While I know most people in the community balk at the thought of doing something that would make you more appealing to the masses, getting a facial tattoo that is not symmetrical almost always does exactly the opposite of that. It subconsciously makes you less attrac
tive to other people, whether they’re into tattoos or not.