Let me introduce you to IAM:lost raevyn (more on this story on her page by the way). She picked up one of the BME slogan shirts — “if you’re staring at me, fuck off” — and sent me a picture, so it was added to the BME gallery. Ryan from BMEshop thought the picture would illustrate the product page well, so after OKing it with her and making some small changes, it was added there. 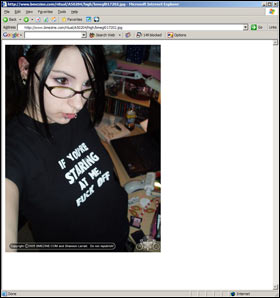 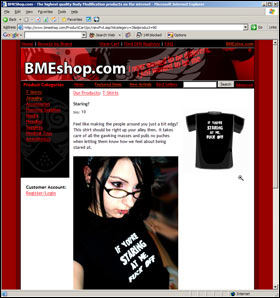 Without permission requested or granted, the photo appeared in the October’s Upfront Magazine, an indie local that just happens to come out in lost raevyn‘s area — and you can see that they’ve nabbed the picture straight from BMEshop. Because the magazine is from her area, people around town are approaching her assuming she wrote the piece, so on top of the issues of theft, it’s directly affecting her.

Her mother brought it up with their editor, who replied first with a bizarrely inaccurate interpretation of copyright law, and then a punchline that shows the staff of Upfront Magazine to be, well, kind of stupid.

So it’s not stolen from the internet because the designer took a photo of his computer monitor while he was browsing the internet and then cut the BMEshop photo out of that photo? Well hell, if that’s how cause-and-effect works and relates to blame, let me just state for the record that I didn’t burn down the homes of the folks at Upfront — the matches and gasoline did it.

It’s important to include the full address in this entry, because then when people do a search for this newspaper on the Internet, they’ll get to hear the story about how Upfront magazine rips off other people’s content without asking and doesn’t even credit it. If Ryan or others choose to pursue legal action against Upfront (which they would be entitled to do), I’ll post more as is appropriate.