It’s best in his words I think:

“This was my first tattoo; it is just above my left ankle. When we went to Hawaii in 1999, I saw in the book of 101 things to do in Maui to stop in Paia at Island Ink Tattoo and get a tattoo. I told my family that I was going to do this as a joke: I really had no intention of getting a tattoo. On the day we went to Hana we stopped in Paia and my brother-in-law and I found the tattoo parlor and went in and looked around. After about being there for twenty minutes our wives found us and started looking at tattoos also. To my shock, my wife picked out a design and paid a deposit, so I had to do the same! I choose the running man as I am a runner (I have run seventeen marathons from Kona to New York and Boston — twice — and hope to do Maui in 2007).”

“I have gotten four more tattoos since then, a smiling sun on the back of my right calf, an arm band on my right of ocean waves and a running man, a Celtic cross on my left forearm (Irish-Catholic in memory of my oldest son), and a gecko on my left thigh going up to eat the tattoo dot that they put on me for when I had radiation treatment for cancer. – Jim“ 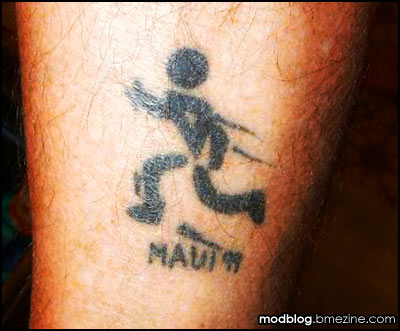