I posted the following on my personal (and more political and deranged) blog, Zentastic, but I thought I might as well spread the sedition around and mention it here, and add some so-called “perversion as proof” to emphasize that I’m not kidding when I write this.


So I’ve been watching the news incredulously, stunned at how clueless airline security is (to say nothing of how clueless the commentary is). In general, the “better” security is at finding bombs, the more invasive and inconvenient it is. And the problem is, bombs can be hidden in ways that would force screening that’s invasive to the point of making it pointless to bother at all.

Can someone give me a serious explanation as to why someone can’t shove enough explosives up their ass to blow a hole in an airplane big enough to tear off a wing if the passender is sitting next to it? Or if they have other plans, why can’t they shove a gun and bullets up their ass? Drug mules are willing to do this. Is the tiny amount of money gained by drug mules for using their ass as storage though security and borders a stronger motivating factor than the gods of religious extremists? 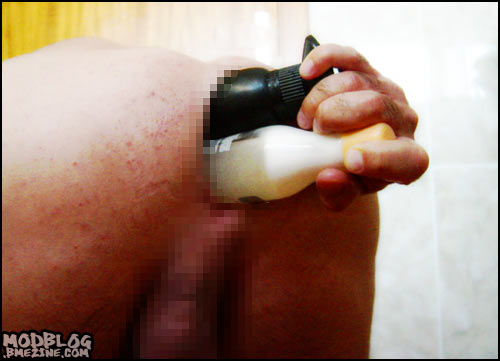 Surprisingly, for once you can’t click the picture to uncensor it. That’s not what this entry is about. My point is that a reasonable person is happy to leave others alone if they’re allowed to express themselves. Because our world’s nations and religions are largely dedicated to arguing about what’s permitted and what’s not — when it’s obviously all neither permitted, nor forbidden; it just is — otherwise reasonable people are pushed into unreasonable actions. So instead of telling people they can’t blow up an airplane unless they’re willing to stick the bomb up their ass first, we might want to ask them why they want to blow up the plane in the first place and talk about it for a while…

Or we can shove bombs up our asses and see how that turns out. Whatever.

23 thoughts on “No soap bottles on planes? How about snakes?”