Tattoo Hollywood has come and gone.  I think I’m still trying to recover from the jet lag.  I had a great time this year.  This post, however, is not about me, it’s about the Best in Show award winner.  Seeing as I was a crew member, I got to see a lot of the work that people were getting.  I’m not lying when I say I was blown away and competition for all the contests was really stiff!  The smiles on attendees faces said it all.

Unfortunately, I had to spend Sunday evening at the booth selling admission bracelets so I didn’t get to watch the contests take place that night.  The judges Sunday night were Clark North, Jimmy Utah and Little Linda and the contest culminated with the “Best in Show” piece, which was a piece started and finished at the convention. While I didn’t get to see the contest, I did get to see the winner’s progress as the tattoo, which took 9 hours to complete, was worked on.

Without any further rambling, I give you this year’s Best in Show winner, none other than Katie McShady!  Katie was tattooed by Japanese artist Horiren.  Horiren practices tebori, the traditional Japanese method of hand tattooing.  She used a tattoo machine to make the outline mainly to save on time and the rest of the tattoo was completed by hand. 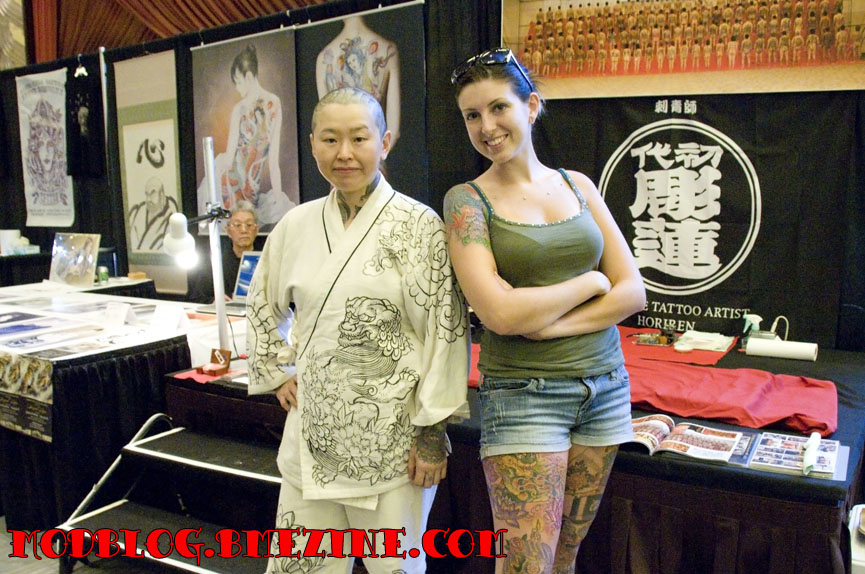 Want to know more? Read on!

I was also tattooed by Horiren and Katie and I had a lot of time to compare notes, so to speak.  The process was surprisingly less painful than the experience of being tattooed with a machine.  I stopped by to check out the progress several times as Katie was being tattooed.  She looked very zen and relaxed, iPod on, eyes closed as a crowd watched Horiren work. The photo below was taken many hours in to the tattoo and Katie is still smiling! 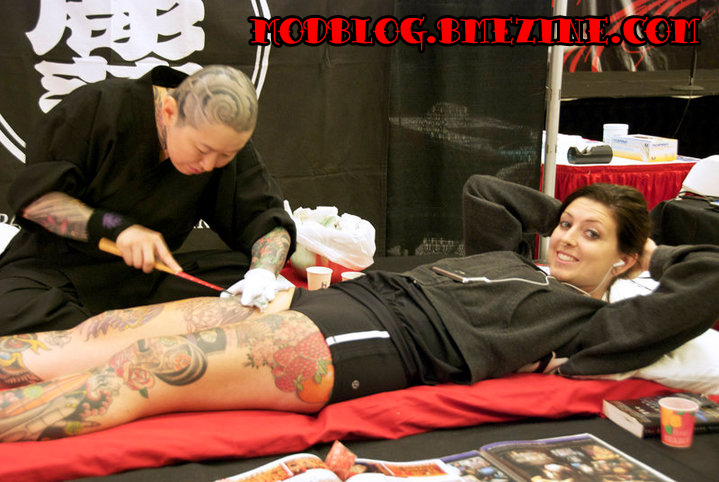 She didn’t use a stencil.  I’m not sure if she ever does.  The tattoo was drawn on by hand with a sterile marker prior to starting.  Katie hardly had any swelling even after a full 9 hours of tattooing.  Once finished, Horiren proclaimed, “WE FINISHED!! VERY VERY STRONG GIRL” and, as Katie says, continued to praise her strength in Japanese.  Katie was given a ceremonial robe to wear and many photos were taken.  Katie says she began crying because she was so overwhelmed by the experience, which she calls life changing. 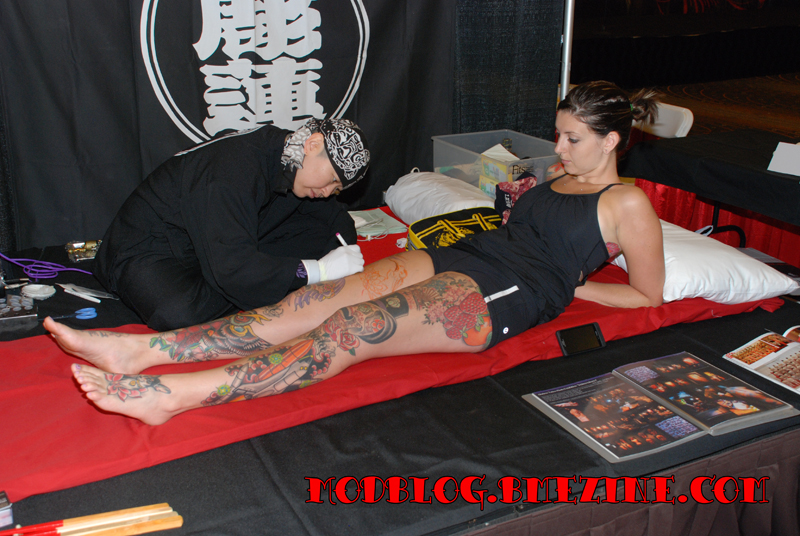 These photos were taken the day of the contest, the day after Katie was tattooed. 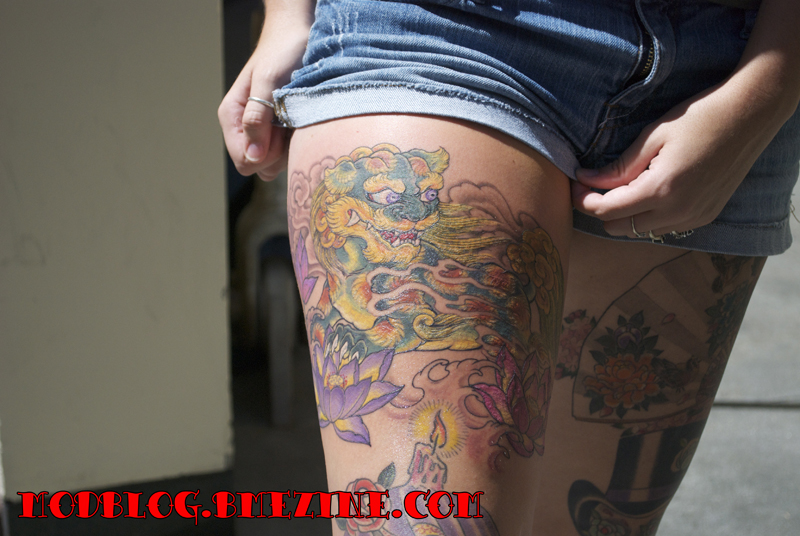 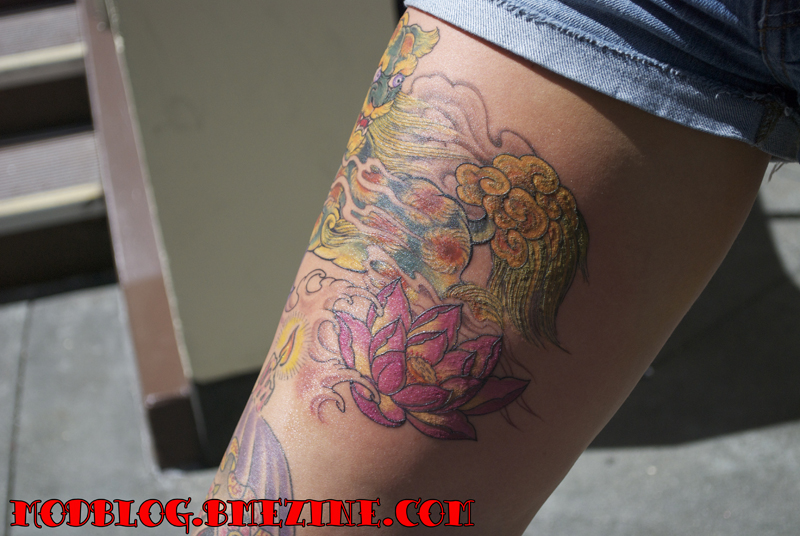 After winning Katie was given a trophy and Horiren was given a special prize, a tattoo machine from Lucky Supply that had the Hollywood sign on it. Congratulations to Katie and to Horiren for her incredible work!

As photos come in you’ll be able to see them in the Tattoo Hollywood Gallery. If I can get a photo of Horiren’s prize I’ll update the post to include it. 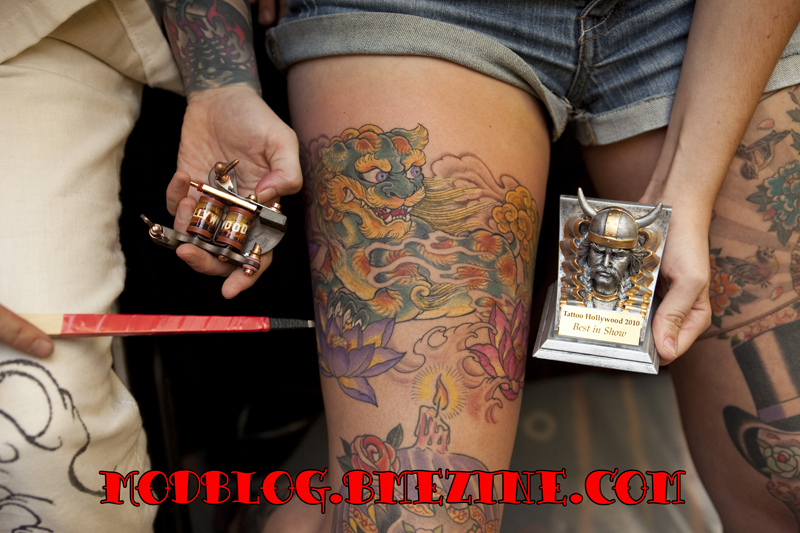