Today’s news post will probably be the shortest one I’ve ever written.  This week has been completely dead for modification related news stories.  It’s so short it’ll all be on the front page with no click through, which I don’t think has ever happened.

Parents often threaten children contemplating tattoos with the adage “It’ll ruin your life“.  Well to one Florida teen, it really did ruin someone’s life… her father’s.

Although Floridian father Michael Turner has decorated his body with several tattoos, he didn’t want his daughter to get any body art of her own. Tattoos are played out, and also nerdy. Apparently his daughter did not care, however, and convinced her brother to drive her to the tattoo parlor. Felony charges resulted!

Not for the disobedient kids, but for Father Turner—who allegedly got in his car and twice tried to run over his son, 17-year-old Jourdyn Turner: once by accelerating forward, and once by putting the car in reverse. When that didn’t produce the desired result (injury? death?), Turner pulled a crowbar out of the trunk and reportedly tried to attack Jourdyn with it. Turner’s wife/the kids’ mother witnessed the melee and separated her loved ones before law enforcement officers arrived. Turner was charged with aggravated assault with a deadly weapon, and now faces a future of prison and more (prison) tattoos.

In Arizona another man joined the “Don’t commit a crime if you have a distinctive tattoo club”. 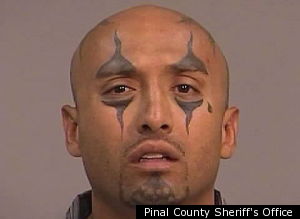 Thanks the suspect’s unique facial tattoos and lengthy criminal record — including a conviction for aggravated assault against a police officer with a deadly weapon — law enforcement officials in the Arizona jurisdiction say they had no trouble recognizing the 31-year-old when he allegedly fled from a Sept. 27 traffic stop in Casa Grande.

“The deputy, just by looking at his face, knew who he was,” Sheriff’s Office spokesman Elias Johnson told The Huffington Post. “He’s been in our custody so many times we knew exactly who it was even before we ran his [information through a database].”

BBC News put out an article this week about tattoo regret, and getting temporary tattoos to “test drive” before getting a real one.

And finally the Pittsburgh Post-Gazette has an interview with Mark Perrott regarding his photography exhibition, “Tattoo Witness”. 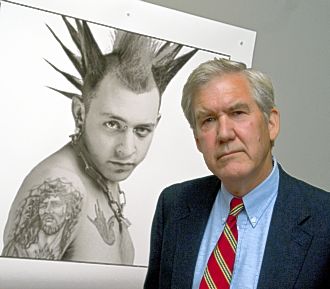 The photographs are so beautiful, the sitters so intensely present, that a visitor’s first response is to lock eyes with the individual staring out. While each sports a tattooed body, that fact is surprisingly secondary to the overall persona, which wears the markings as easily as another subject may wear pearls or a fedora.

Capturing that holistic quality is characteristic of a master portraitist, and it animates “Tattoo Witness — Photographs by Mark Perrott,” an exhibition at Westmoreland Museum of American Art that comprises 25 large prints selected from thousands of photographs taken by the noted Pittsburgh photographer between 1979 and 2004. Another 50 are projected in an adjacent gallery.

And that’s it for this week.  As always, if you find a story you think should be included in the weekly news post, just send me an e-mail.