Max Gowl who pierces at Body Mods Ink in Sunbury, PA just did what might be the deepest rhino piercing I’ve seen yet on Maggie Louise (I cringe at saying that because such statements always inspire people to push things further “for further’s sake”). Max tells me the piercing is pretty straight up what it looks like — a basic 3/4″ long straight 14ga barbell, with no other piercings in the mix. That is, no giant septum or anything. In fact, this is Maggie’s very first piercing of any type. 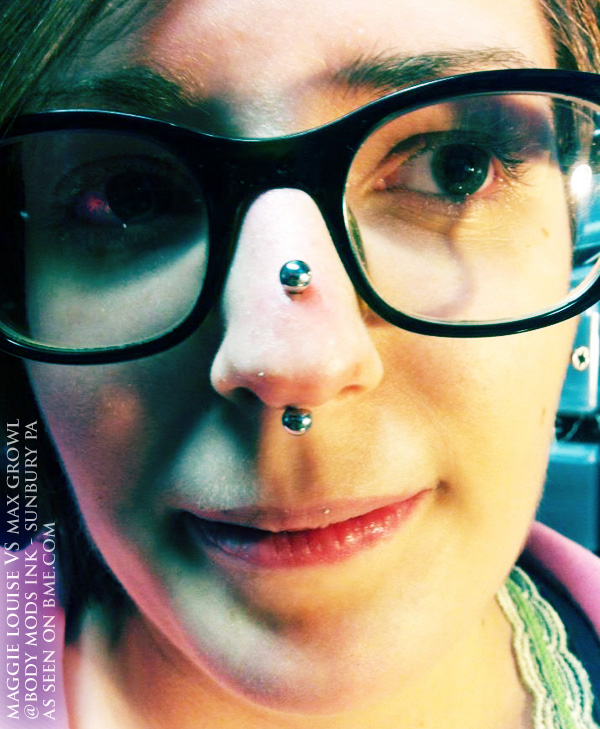 This piercing was done literally last night, so I can’t tell you anything yet about how the healing is going, but I think it’s probably safe to say that it will be quite sore for some time and be a lengthy healing due to the depth of and type of tissues involved. That said, Maggie tells me that she barely feels it, and that the piercing wasn’t painful either, comparing it to getting a shot at the doctor, just slower. She says,

I was inspired by Nick [also of Body Mods Ink] — He was the first person who I ever saw who had it done. Before that, I always told myself I was never going to get any piercings but I absolutely fell in love and changed my mind, but waited to make sure. I watched videos of it being done which freaked me out, although in the end, it literally ended up being nothing. I also saw a picture of a girl with it done and I thought it looked girly in a “badass” way. I figure I will be getting stares but I’m happy with it.

She’s calling her variation on the rhino a “Maggie piercing”, although of course this piercing is a rhino, albeit in an uncommon placement. Her eventual plan is to swap the large top bead for a small diamond so it doesn’t look quite so over-the-top.

I wanted to mention one thing about the placement because some piercers have posted that the piercing is crooked, which is true, and that it should be redone to correct it, which is probably wrong. The nose is a puzzle of pieces of cartilage, where you can do a standard rhino dead centre — in fact that’s the easy placement in some ways because it’s where the nose “wants” it to go — but if you’re talking about a placement that’s as deep as Maggie’s, you typically have to pierce it on the side of the nasal septum (ie. crooked). It is not safe — and perhaps not even possible — to pierce the nasal septum lengthwise. So the reality is that this placement in my opinion is as straight as it can ever be, anatomy dependent of course (if a person has a deviated septum, maybe it could be visually perfect).

That said, I’ve seen some pretty poor diagrams of the cartilage that leave out the central strip, so I suspect any piercer who says “do it better” is basing it on the idea that you can just slip it between the two “side panels” and it’ll be fine. I don’t think that’s usually true, although of course anatomy is different from person to person, which makes rhinoplasty such a money maker! But I hope the above diagram is helpful in understanding the difference in deep and standard rhino placements (note again that it is not definitive both in terms of anatomy or jewelry; there are options and variations). I should add that the standard rhino could be placed deeper than I’ve drawn it here, on most people’s noses anyway, but there’s a point at which you have to either not do the piercing that high, or be willing to be “crooked”. As you can see, the central septum does not generally extend to the tip of the nose, so it’s much easier to do a symmetrical placement there. In my opinion, it’s not a matter of saying “do it better so it’s not crooked”, it’s a matter of “should this crooked-by-default piercing be done at all?”. And really that’s up to the client and the piercer, and as long as the piercer has explained this to the client. 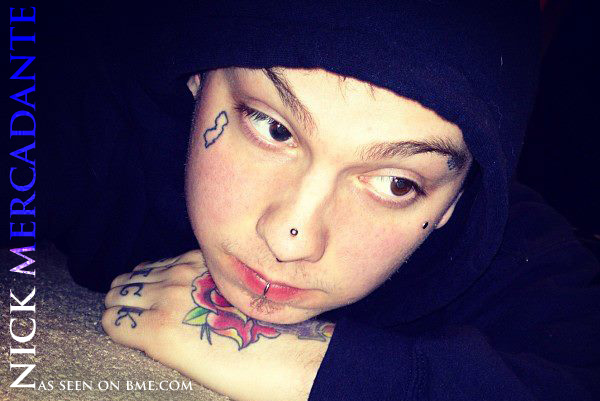 Finally, I want to also show you Nick Mercadante’s rhino placement — who as mentioned above actually inspired Maggie to get the piercing in the first place — which is beautifully deep as well, although not so deep as to push it off-center… His particular placement is about as deep as you’d be able to go on most noses and still have the placement reliably central in my opinion. To my eye this works better, but it’s really a matter of how important it is to push it up high versus being symmetrical. Nick has actually had his pierced a few times, once by Max, once by Chris Bucher, and once by Justin Craven.

One thought on “Rhino Piercing with Deep Placement”