This morning at 4:38AM, the beautiful artist and [best] friend of the swastika ManWoman passed away peacefully after a battle with cancer. He lived a passionate and revolutionary life, and his impact on this community continues to grow. Thankfully after seeing his life’s work vindicated and bringing joy and open eyes to more than he ever could have imagined when it first began, he found himself in the terrible position of having a painful and debilitating disease with no cure, and he made the decision to stop treatment knowing it would mean the end of his suffering within days. If you see a swastika, that symbol of light and love, tattooed on someone, you can thank Manny. All of the spiritual and geometric tattooing that is exploding today owes his efforts a great deal of credit and thanks. Although he was often unknown by those he helped transform both physically and spiritually, like some benevolent and hopeful puppetmaster bard, he touched almost all of us in one way or another, and was one of the most influential guides in this community.

Manny was one of the few universally respected wisemen of this community, and his passing will hit a lot of people very hard and he will be deeply missed.

But even though Manny has passed, he lives forever in not just his art and the retelling of his own story by others, but he lives forever in the millions of tattoos that carry his message and a small part of his soul. Manny cannot die, because his passion and his ability to inspire others to make the light he rediscovered a part of their lives as well gave him immortality.

In the video above are some of Manny’s final thoughts, recorded at the start of November, and below is a picture of my family with Manny’s family, taken in 2004. In the picture are Manny and his daughter Serena, myself, Rachel, and our daughter as well. He was just a wonderful, wonderful person. This post feels shamefully sparse, but in some ways I don’t even need to say a thing, because I don’t know anyone who met ManWoman that wasn’t completely captured by his warmth and charm. 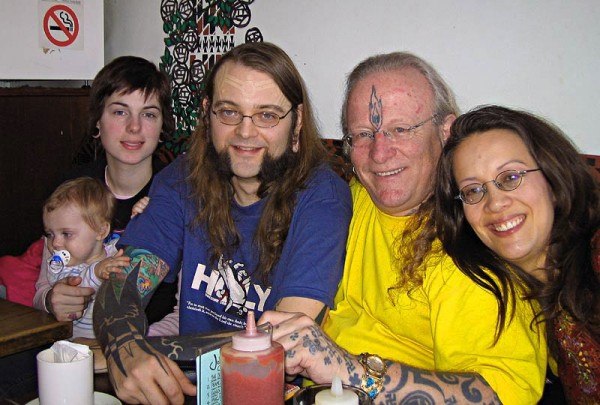