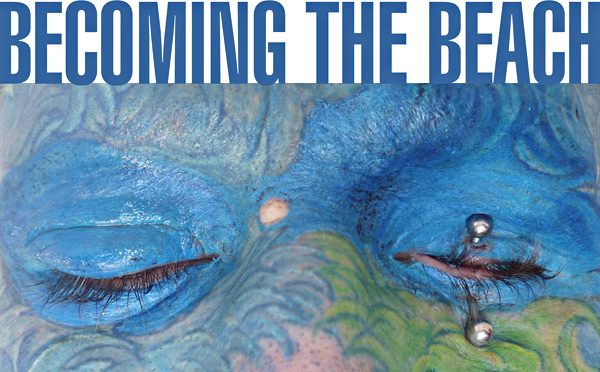 Eyelid piercings have wowed people ever since I first featured them on BME. Although they’ve shown themselves to be safe and viable when properly placed on a person with appropriately shaped anatomy, they remain one of the rarest piercings. Spanish pacifist Juan Carlos has a variation on it that is perhaps the rarest of them all — a single bar connecting the top and bottom lids, almost like an industrial for the eye. The reason this piercing is so rare is that in order to wear such a piercing permanently, it requires a very unique anatomy — the lack on an eye. As the first person to get this, Juan claims the “right of naming”, and calls this the “Tuerto piercing”, or “Eye piercing”, as it replaces the eye. I had a chance to chat briefly to Juan about his remarkable piercing and other mods, including his striking full-face tattoo.

When Juan was nineteen, he was required to serve time in the Spanish military, as all citizens were required to at the time — this happened almost twelve years before the government would finally abolish the requirement. Juan went on to join the elite Spanish Green Berets, but wasn’t comfortable with aspects of their behavior once he got to see it first-hand. He felt like he couldn’t breathe. The abuse ran contrary to his ethics — he has “Libertá” tattooed on himself three times — and knew he couldn’t live with himself if he became part of this. It was either figure out a way to get out of the military or commit suicide. Not wanting to die, on January 28, 1990 Juan took a needle and punctured his own left eye — a process that he describes as not particularly painful, but just a sensation of pressure. This wound became infected, resulting in the loss of the eye — and more importantly, a psychiatric discharge from the military.

As with most people who lose an eye, Juan initially wore an artificial glass eye, an eye that he came to hate. He saw it as “a dirty mask” that he was required to wear to fit in, and that it “symbolized the triumph of ‘handsome and decent’ over the ‘rebels and libertarians’.” In addition, he needed to wear it all the time to maintain the eye basin, and it was uncomfortable at the best of times, and torturous if there was a scratch — “shit, more shit, as always.” 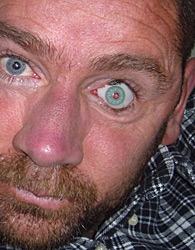 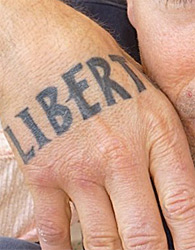 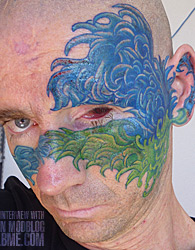 Left to right: 1. A photo of Juan before getting either his facial tattoos or unusual piercing, while wearing his uncomfortable glass eye. 2. Two of Juan’s three “Libertá” tattoos. 3. Early in Juan’s tattoo process, with his false eye removed.

So he rejected the false eye. He found that not wearing the artificial eye, though freeing, came with problems of its own — the underlying tissue changed in shape, thereby altering the angles of his eyelashes. The top lashes would fold under the bottom lid, which was extremely uncomfortable, so he started looking for something that would both solve this problem and symbolize his sense of personal freedom and autonomy — thus this unique eyelid-to-eyelid piercing. He clarifies, “my piercing, in principle, was not done for aesthetic reasons. I do like it — this piercing is one of the most beautiful and important decisions I’ve made in my life — but it is a device with a function.”

The piercing itself was done by Montse Manzorro, who pierces and tattoos at Tarambana Tattoo in El Puerto de Santa María, a coastal city in the southwest of Spain. She had been piercing for years, but like most artists, had never done an eyelid. At first she refused, but he replied with a threat experienced piercers have heard oh-so-often: “If you don’t do this for me, I’ll go to the newbie down the street, and if they won’t do it, I’ll do it myself.”

So Montse considered the matter, called a doctor friend who told her it was no big deal, and agreed to do it. Juan describes it as quite painful to have done, but not a big deal beyond that. He figures that the initial healing took about a month, and he’s had the piercing for about four months now (it was done October 10, 2012). Juan says the piercing is very comfortable — much more comfortable than the artificial glass eye was. So far the piercing has been a success both in terms of function and aesthetics, with Juan explaining, “I am very happy and I feel freer than ever. Nobody will tell me now what I should wear or not wear. My life is my business and mine alone.” 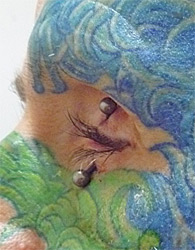 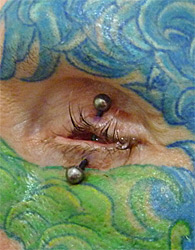 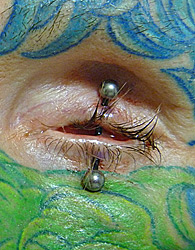 Above: Immediately after having the “eyelid industrial” piercing done.

I asked Juan how others in Spain reacted to him and he laughed — “In Spain? I do not exist! It’s dead, this country is dead — we need to ban bullfighting. The people are aggressive animals, but they do not want blood on their hands. My piercing goes mostly unnoticed due to my facial tattoo — that is, people tend to look away from the color, so they don’t have a chance to see the piercing. Young people though — and some old pimps — love it and appreciate how unique it is.”

I should add that Montse is also Juan’s tattoo artist, a tattoo adventure that is still in progress. A skin condition that Juan has asked me not to discuss in detail is deeply linked to his tattooing — first, because it means that the tattooing has at times been slow going and there are areas they can’t work on, but also because it keeps him out of the sun, restricting his ability to go to the beach (it’s just not the same at night). This is a great loss he says, “because I love the sun, my mother Sun, my favorite star, the love of my life. I am a child of the sun, always happy in its light.” Like many sun lovers, the beach was a big part of it, “I used to go to the beach in winter, and I was bathing in the sea.”

Losing the beach was heart-breaking — “I’m a baby without its preferred toy, it’s oldest toy”. Making up for the loss of the literal reality he’s moved the beach to his face — “The tattoo helps me to live, you know this, Shannon, you’ve heard it a thousand times. My facial tattoo represents the sea, the beach that I lost, the beach that I dream of most every day.”

Juan greatly enjoys corresponding with others around the world about body modification. Contact him via email at [email protected] 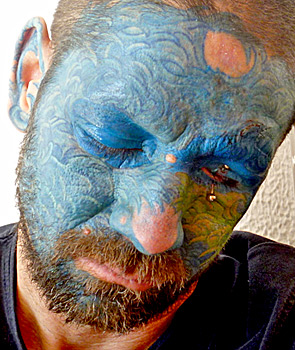 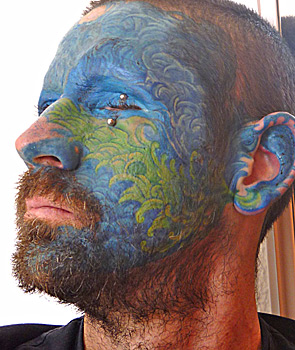 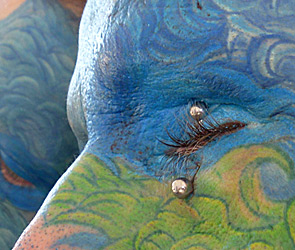 Above: Juan’s piercing about four months old, with more blue tattooing added, including both top and bottom, left and right eyelids.