Here’s a good mod for people who really like the way hard nipples look under a tight t-shirt! These nipple microdermals were done by Matt who pierces at Everything & Nothing (everythingandnothing.co.uk) in Carlisle, Cumbria. I asked Matt about the difference between doing a microdermal on normal skin versus nipple tissue, and he filled me in with his experiences,

I found that the tissue that needed to be removed was stuck fast, and needed to be removed with haemostats rather than gently being wiped away with a swab (as with microdermals on the stomach or arm for example). The only thing I can compare it to is the back of the neck — tough and not a lot of room for moving it around once put in place. Insertion was very simple. I had freehand needles ready to place in at angles to help insertion but they were unnecessary. The jewellery slotted straight in and was perfectly flat the first time. They bled more than anywhere I’ve placed them before but not enough to give me reason to worry — it stopped after two minutes or so.

The customer, a forty-six year old body modification enthusiast from Nottingham had wanted these for a long time, but because of his work on the oil rigs hadn’t been able to get it until now. He described the procedure as painful, but on the other hand, the kind of guy that works the rigs doesn’t have a problem dealing with a little pain! Zoom in for a larger look. 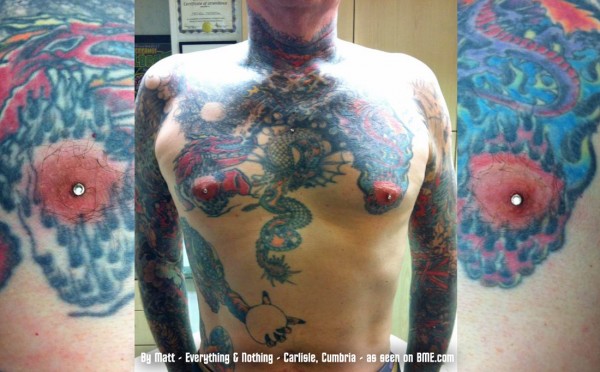