While most implants are still basic shapes or “flash” selected from a limited portfolio (skulls, spiders, biomech ribs, and so on), these days it is possible to get cast custom implants made at a reasonable price and within a reasonable timeframe. Because of that, interesting new markets are starting to evolve that haven’t really existed until now — for example, the person below is a customer of Hugh Mattay’s (fb/hugh.mattay) who has no tattoos and no piercings — just implants! Hugh had already done a finger magnet on him as well as a pair of circular implants on his forearms, but this time he came in with something more complex, a printout of the Fullmetal Alchemist logo (a Japanese manga and video game series), which he wanted to have capped with an eye containing a magnet. Hugh got in touch with Max Yampolskiy (fb/max.yampolskiy) who created this and just three weeks later the customer was getting it implanted in his chest.

I really love that these days people who don’t enjoy the look of tattoos, scars, or piercings — the traditional forms of body art — have this 3D sculpting as a viable alternative. I’m really looking forward to seeing what other projects Hugh and this customer are going to get up to — for example, they’ve discussed stretching his lobes, but using internal implants, without piercings! Below are the Fullmetal Alchemist implant, right after draining 46ml of fluid (eww) (Hugh figures the unusually high amounts of fluid buildup are due to the difficulty of placing the complex shape), and also a picture of the client’s forearm implants. 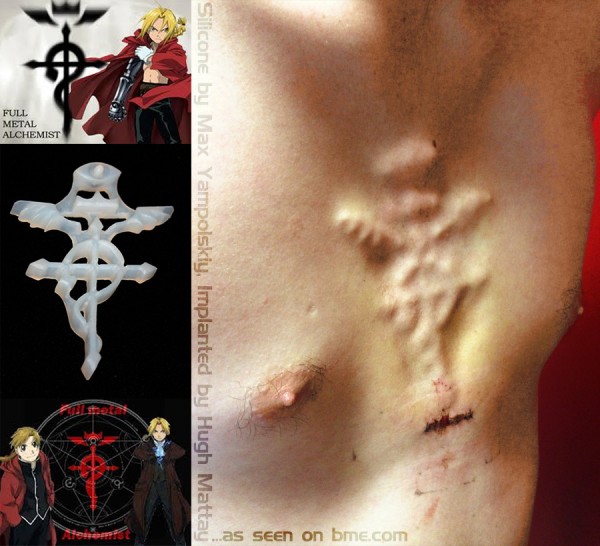 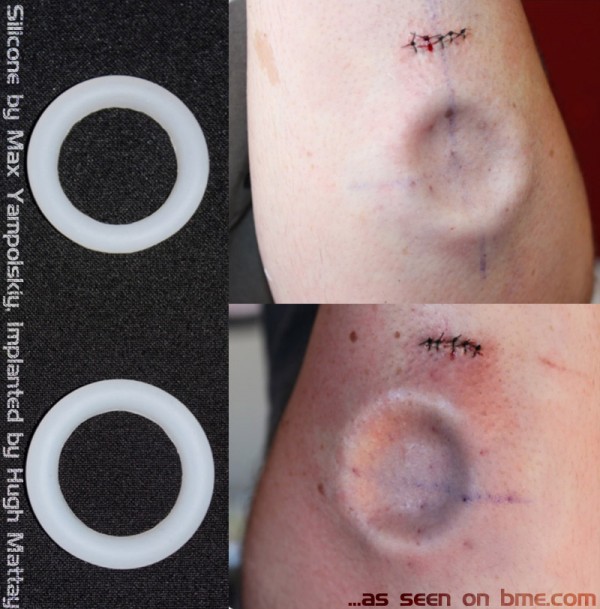